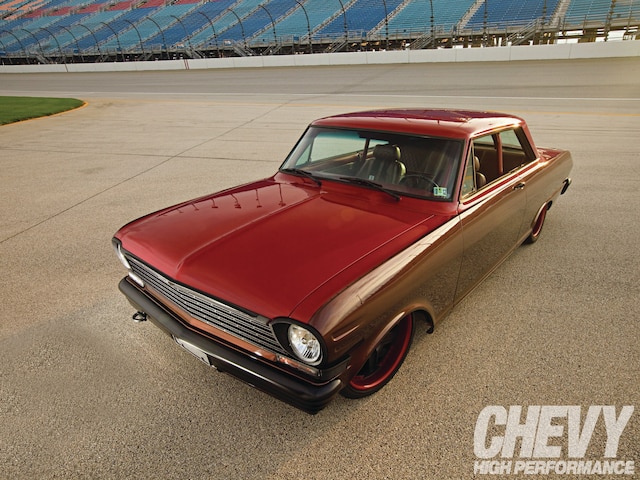 By all indication, the depression we are plagued by hasn’t slowed the high-end car-building business by a fraction. Gerry Kerna’s ’62 Chevy II is proof of that. Indeed, the number of these specialty shops has seemed to increase manifold over the past two years. Check the pages of past CHP issues to see if we’re lying. Shops no one’s ever heard of are rolling out the most sophisticated hot rod machinery on earth. In essence, it’s a return to the guild-craft days of old and things of substance produced by hand, and hooray for that. To say that RPM Hot Rods is typical of the genre would be a deception. No two shops or their methods are the same, and that’s the beauty of it. They make things in America with individuality and pride. That’s the ticket. In any case, it’s refreshing to see anything other than a ’69 Camaro, the indisputably predominate Pro Touring vehicle, so any other variant is like a meat cart to a starving wolf.

Gerry decided she wanted in on the Pro Touring, road course, and autocross events that have taken the hearts and minds of so many these days. The idea is to drive. The idea is to drive in comfort and civility. The idea is to have a piece that handles and brakes just as well as it scalds pavement, all of it done with a fine sense of balance. Gerry and family reside just outside of Pittsburgh. That country is one hill after another and more like a roller-coaster ride than a byway. Mountain roads are a constant challenge, so superlative handling and braking characteristics count way more than gross engine output.

Gerry found her II in Nebraska, a seemingly uninviting climate for a car of this vintage. The prime objective was a solid body shell and that’s what she got and never looked back. RPM would remove all other structure in preparation for their modern infusion. The prop list includes Curt Ukasik, designer and builder; Josh Hart, fabricator; Steve Barrett, 12 V; John Harrison, Area 51, painter; and Chip Bowers, powdercoater at C4Labs in Marshallton, Delaware. Gerry says, “As the car was being disassembled, we commented often that it was small and scrappy looking. Curt said it looked like a runt. The name has stuck ever since.”

Ukasik says, “We finished the car just in time to head for Columbus and enter the Street Machine of the Year competition. When we arrived, the car only had a trip around the block on it but we felt we had to put it to the test so we set out to the streets and the autocross. By the end of the weekend, we left with a Top 5 pick and over 200 miles on the street and autocross. We were later named the 2011 Detroit Speed Muscle Machine of the Year!”

“The following weekend, we loaded up and headed for the Heidts Performance Car Challenge (where these images were taken). We were able to test the acceleration, handling, stopping, and overall performance out on the racetrack and make adjustments where needed. We walked away with 13th place overall against a great group of proven cars.” So take heed dudes, the Runt is no longer such. It is armed and dangerous.

One of the Runt’s endearing qualities is that its hood is uninterrupted. Flat, as in sleeper flat. The reason for this is the low-profile LS7 tucked between its new framerails. Well-known GM collaborator (read Skunkworks) is Thomson Automotive in Wixom, Michigan, so they got the nod for a hopped-up rendition of the Corvette’s finest. They strengthened the bottom end considerably with forged parts—custom Diamond pistons and Oliver connecting rods on the original forged arm. They CNC-milled the cylinder heads, including combustion chambers, and with the fitted Diamond slugs, bumped the compression ratio to 11.75:1. Specs for the custom-ground COMP hydraulic roller remain proprietary. Thomson remedied the dry-sump oil pan quandary with the addition of a conventional Moroso unit. Pump gas is drawn from an RPM-fabricated and very inventive aluminum tank and moved by a VaporWorx fuel system. Exhaust is extracted via Sanderson headers massaged by RPM. The trash exits through Flowmaster 50-series cans into a 3-inch system that has been treated with Prism high-temperature coating. To escape the hot, stagnant underhood fog, RPM built a gnarly and true cold-air intake system by adapting Spectre Performance tubing and joints. Sweating the combination in a race environment is the job of a custom PRC aluminum radiator core and thermostatic fans. Sterab fluid coolers are ancillary to the differential, power steering, and transmission in conjunction with Weldon heavy-oil electric pumps for unmatched circulation. The accessory drive is Vintage Air Front Runner with power steering pump and A/C compressor. These items plus the air intake tube and the rocker covers were coated by C4Labs. All hardware was furnished by ARP and Devil Accessories. Specific output is 650 hp. Torque jumps a McLeod twin-disc road racing clutch assembly hugging a lightened aluminum flywheel. It passes the grunt to Bowler/Tremec T56 Magnum six-speed fitted with a 2.66:1 low gear.

The II is a relative bantam compared to a Camaro so there are savings to be had in unsprung weight. Instead of something unnecessarily larger, the brakes are six-piston Wilwood on 13-inch rotors and 12-inch rotors with four-piston calipers. Billet Specialties Throttle wheels are 18x9 and 18x12 with a custom finish by RPM/C4 Labs. Rollers are 255/35 and 335/30 BFGoodrich g-Force KDWs.

Though RPM now has a killer full perimeter frame for X-bodies, it wasn’t available for Gerry Kerna’s build. In its stead, RPM had The Roadster Shop in Mundelein, Illinois, construct a fully boxed perimeter frame from 10-gauge steel. Then, Jeff Lutz at Lutz Race Cars in Evans City, Pennsylvania, fabricated a chrome-moly ’cage for the obvious safety and structural rigidity concerns. For the front suspension, RPM modified a Heidts Pro-G assembly fitted with 2-inch drop spindles, a power steering rack, tubular control arms, and a transmission crossmember and added RideTech single-adjustable coilovers. The Currie 9-Plus housing is fitted with a nodular iron carrier, 31-spline axles, and a 3.70:1 gearset. It’s located by a parallel four-link setup and a Panhard rod. Wheel movement is governed by more RideTech shocks. Speedway Engineering Nextel Cup–style sway bars control what little body movement there is.

To bolster structural integrity and mitigate torsional bending, the body shell was welded to the frame. The front wheelwell openings of that pristine body were stretched wide, and the bumpers were tucked and smoothed. A sheetmetal spoiler appeared on the II’s chin. Then, RPM set about crafting the smoothed engine bay, firewall, floors, lower front valence, and wheeltubs. They made a snorkel and surround for the cold-air intake system and routed it to the outer well away from engine heat and above and in front of the wheel. Since the LS7 engine sits very low in the chassis and the intake system is so compact, there’s no need for anything but a flat hood. It’s held by Ringbrothers hinges with a custom finish by C4Labs. Alumicraft’s Dan Baker prized a one-off grille from billet stock. The headlights are United Pacific. The door handles are another Ringbrothers item. RideTech Precision Coachworks crafted the gas filler lid, and RPM modified the United Pacific LED taillights. John Harrison, Area 51 in West Newton, Pennsylvania, shot the Sikkens base/clearcoats, that ferrous Red Allure Pearl and Sunset Bronze Mica after a pattern by Thad Cunningham at Icon Signs and Kustom Paint in Duncansville, Pennsylvania. At last, Cunningham applied the pinstriping.

There is a lot going on here. American Autowire powered by an Optima Yellow Top gives surge to the StarDrive starter pushbutton and powers the Clarion head unit and backup camera, as well as the JL Audio amps and speakers. The dash has been reconfigured to accept Stewart-Warner Maximum Performance gauges and provides a backdrop for the Billet Specialties Throttle steering wheel arcing on an ididit tilt column. Smith’s Custom seats in Martinsburg, Pennsylvania, built the units and applied the unusual Optima leather sheaths. Other standout bits include Clayton Machine Works pedals, Specialty Engineering shifter, RideTech five-point harnesses, and Axia Alloys rearview mirror. The Hushmat Ultra and Silence Megabond make it so you can barely hear the whisper of the Vintage Air Gen IV Magnum HVAC system. CHP