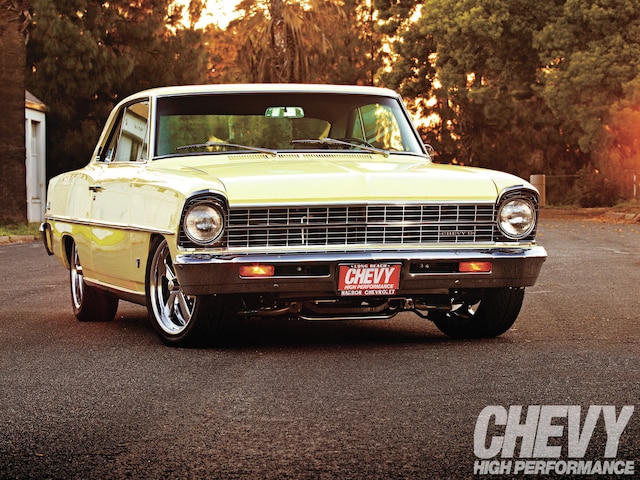 David Stoker is 30, has a wife, Kristen, and a 7-month-old guy, Dylan—all are denizens of Ontario, California. He is very much like most of us, a poster child of the hobby, if you will. David’s a confirmed Nova-phile, including a ’67 Nova coupe, an SS, a Nova sedan, two ’66 wagons, and one ’72 Nova. He had his eye on this ’67 for many moons. The first SS is still in the Stoker stable. He drove it through high school and college and drag raced it for years.

As for the newest face in the choir: “I had known about this car for a long time. It sat beside a friend’s garage in the high desert for at least 10 years. It still had the original paint and was a factory V-8 air car. Finally, it became available in 2007. I bought it with the intention of building a nice driver with overdrive and air conditioning, but still with plenty of power and decent handling. The car took four years [and a skimpy $25K] to build and was finished in November 2010. We recently took our first cruise in it down to the Goodguys Del Mar event. We strapped our young son in the back and cruised down with the A/C on.” Yeah.

Though David’s neophyte was in need of a complete restoration, it was a clean, low-mileage (80,000), original paint car. David and his dad, Terry, did the renovation. It was an orderly build. They began with the frame, and then they turned to the body, suspension, and, ultimately, the power module. The idea was to remain conservative in all rudimentary spheres. The engine did not have to be a napalm canister, it only had to act nice, get decent mileage, and be short on maintenance. Torque was important certainly, but when you realize that it has to propel just 3,000 pounds, the output needn’t turn the earth every time the throttle goes down.

Anyone who’s fooled with early Novas knows that the front suspension is a joke. It diminishes underhood and fenderwell space is prone to losing alignment, and it flat won’t respond when wheels are turned in anger. The cure is sourcing the aftermarket for stuff that enables the correct camber curve, Ackerman angle, and product quality at the very least.

The original setup is composed of a lower control arm with a single pivot point and an accompanying strut rod. The CPP Mini Subframe kit replaces the lower control arm with a more modern two-pivot setup, and eliminates the strut rod. The result is stability way beyond the original configuration. But this Nova’s suspension system isn’t calibrated for the slalom, road course, or anything other than public thoroughfares. In this case, David used it mainly to achieve the stance he envisioned. He also wanted the control it would lend, not on-the-edge killer, but decent handling nonetheless.

Once in awhile, we use Stoker’s white primer Nova as a mule for equipment evaluations. All of this is done with a budget mentality, just as David has built his white primer Nova with a 5.3L LS engine, complete with nitrous oxide. So, rather than falling for the usual crate engine for his newest Nova, we like that David kept the original 327. Old guys cut their teeth on this high-revving beauty. Monster displacement and high-specific output just isn’t needed. The bores were treated to a clean-up poke and the engine was built with time-honored modifications (cam, intake, and better cylinder heads and exhaust tract). It’s nuts-only. No power adder then, no power adder now.

David sent the venerable 327 to Brothers Machine in Ontario, California, for the proper execution. Brothers poked the bores 0.060 inch, nudging the displacement to 337 ci. Once back, David and his dad took a nod to the budget and to what would’ve been done back in the day, the crank, rods and pistons (9.3:1 compression ratio) are original. The idea was to build the motor with the roots of hot rodding—let it breathe, let it breathe. To that end, a Crane hydraulic flat-tappet (0.480/0.494-inch lift; 228/234 degrees duration at 0.050 inch), Mellings timing chain, Trick Flow hardware and pushrods, and Crane roller rockers complete that platform. Brothers capped the block with Trick Flow aluminum cylinder heads and the bottom with a stock Nova front-sump oil pan. The induction system is classic: a Weiand Air Strike intake manifold, Holley 4150 carburetor, and a Fram element. Spent stuff is drawn from the cylinders by Sanderson 15/8-inch primary-pipe headers. Jolt zings from an HEI distributor set at 36 degrees total. On the pump, the little-block creamed 380 lb-ft at 4,000 rpm and 396 hp at 6,200 rpm. David got his overdrive, too, a Gearstar Level 3 4L60 fronted by a Gearstar 10-inch converter with a 3,000-stall speed. The transmission is cooled by stock radiator core. The driveshaft was shortened to fit the package. Terminus is a 10-bolt axle carrying a Positraction limited-slip and 3.36:1 gears.

Suspension is configured around a CPP Mini Subframe kit that accommodates a tubular dual-attachment point (rather than single) lower control arm and mounting hardware. The stock steering connects with 2-inch drop spindles. They act with CPP springs, Monroe dampers, and a CPP 11/8-inch diameter antisway bar. To the rear, we find stock monoleaf springs flanked by a second pair of Monroe shocks.

Without the benefit of eye-opening mini-tubs and the inclusion of the stock strut towers are the limiting factors in the shoebox’s ability to accept large tires and wheels. For reasons of budget, David went with the flow. He put up four appropriately slim and trim Intro Rally 17x7 wheels fitted with Nitto 215/45 and 225/45 contact patches. CPP came to the rescue again with its 11-inch front disc brake package. Stock drums take up the rear. Braided lines are from Inline Tube.

The driver’s pod was enhanced by an American Autowire Factory Fit loom that underwrites the Vintage Air system but little else. There is no audio, no iPod, no MP3, no GPS, no distractions to pull David away from the actual experience. All upholstered surfaces were done in stock-type black vinyl as dressed by Elegance Custom Interiors in nearby Upland. David retained the column shift linkage, freeing floor space and saving several hundred bucks.

Yes, it did sit outside for at least 10 years, but the climate is about as dry as you can get and humidity is in the teens, hence no insipid rot, calcification, or slow death was evident. This made the job for R&A Auto Body (Montclair, California) that much easier to complete. After some minimal filling, smoothing, and lots of blocking, R&A applied the Sherwin-Williams two-stage Butternut Yellow. Indeed, it appears fresh and crisp. CHP