The '11 Cadillac CTS-V Coupe Is The New Standard 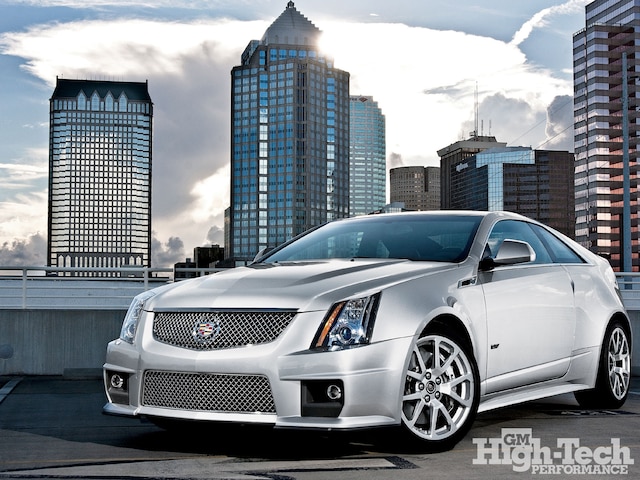 Balancing raw power and a soulful driving experience with refinement is one of the hardest things to do as a manufacturer or builder. Anyone who has built a late-model hot rod can tell you that, however, the stakes are considerably higher when you have a name as old and respected as Cadillac and you plan to sell thousands of cars. While BMW, Jaguar, and even Mercedes have had considerably more experience with taking the heart of a sports car and transplanting it into a refined touring coupe that any businessman would be proud to hang his sport coat in and drive to work, the '11 CTS-V Coupe is Caddy's first attempt to build a two-door hardtop of this caliber in recent history (and arguably ever). Emboldened by the success of the CTS-V sports sedan, Team Cadillac put its chassis engineers to work at condensing the four-door without taking away from the V's amazing performance or design principles. A decision that ultimately put this car into the greasy hands of GMHTP and enthusiasts that wanted to put the smack-down on some smug Europeans.

Upon first delivery of the V, we were instantly the subjects of admiration from the whole office, even though some of the Ford boys tried to poke fun at the Caddy's sharp edges. But it is hard to deny that the '11 V's front-end isn't every bit as impressive as the 556-horse LSA that lie beneath the bulging hood. One look at the 19-inch wheels with their edgy V-shaped five-spoke design, and the 15-inch, 6-piston Brembos behind them, and you know it means business. Feelings of nostalgia from the 2004-2007 SCCA World Challenge are inevitable, and with the capabilities of the new production version you will think you are actually in the race car. Nostalgia ends there, though, as the CTS is fully modern and cutting edge in both aesthetics and function. The interior is a technological wonderland of gadgets and switches that somehow isn't intimidating, perhaps because of the sliding touch screen, which is very intuitive. Enthusiast or not, your client or significant other will thoroughly enjoy the creature comforts and expansive features, especially the minute the hidden touch screen raises up out of the dash. There is no shortage of luggage or passenger space either, with the only exception being headroom and legroom for the rear seat (typical of a coupe). It would appear the 3-inch difference in length (from the sedan to the coupe) came partly from the rear seat area, but both ride nearly identical-most likely a function of the identical wheelbase and suspension.

The single greatest aspect of the CTS-V is that it is uncompromisingly a Cadillac, yet as you apply the go-pedal with some gumption it instantly turns into a bloodthirsty animal. The same can be said of the suspension as well, riding comfortably atop the infinitely-adjustable, heated and air conditioned Recaro seats you feel like you are surfing a cloud (as with any Caddy), yet push it to its limits and the sticky Michelin PS2 tires (255 and 285 mm respectively) cry for more. The massive Brembo brakes knew no sense of fade or lack of stopping power on Gainesville's 1.6-mile course, which is notorious for eating brake pads and tires. Though this is a very tight course that usually rewards small and lighter cars (not 4,248-pound behemoths), the Coupe turned in a 1:08.09 lap time, which was .14 second behind my own stock '05 Z51 C6. It's also important to note that our test car was a 6L90E-equipped automatic, not a stick, which would have affected the lap times more drastically if not for the paddle-shift function. On the dragstrip, though, we were certainly happy to click it into drive and leave it alone. Containing all 551 lb-ft of torque can be a chore without ideal track conditions, and unfortunately with the six-speed auto it is an all or nothing proposition. A good run with no spin keeps you constantly in the powerband, but tire spin and right-foot correction cause a confused and up-shifting transmission. The only method we found to work was leaving the traction control on and breathing on the throttle out of the hole, which got us a pitiful 2.197 short time while hauling bread out the backdoor for a 12.76 at 114 mph.

It was quite ironic that driving like an old man (in a Caddy) got us our best e.t., but we were just happy to get a 12-second time finally. With a faster front half, a 114-mph trap speed is indicative of at least a low 12-second pass (even at its hefty weight). From its road feel, I would have guessed it is an 11-second car for sure. The V is certainly at home on the highway, in overdrive the motor hums right along at 70-plus mph, but the minute you pull out to pass and romp down on the pedal it immediately finds the most ideal of the six gears, grabs it, and launches you like a cannon. At those speeds the V feels extremely stable as well; no pothole or bridge abutment can jar your sense of enjoyment for it. And around town it handles potholes and pavers equally as well; it feels as solid as its weight would imply. Just like the Corvette, the use of magneto-rheological fluid (in the shocks) with in-car dampening adjustment allows these soft dampening characteristics around town and a firmer, more dynamic setup at the track.

Alas all of this praise, there has to be some source of negative criticism, right? From a quality, fit and finish perspective . . . no, there certainly isn't. The seats were amazing, the panels fit perfectly, the cabin was quiet, the materials seemed quality, and the sound system was money. From a performance perspective, yeah, there are a few. The 6L90E (and the 6L80E for that matter) is not a drag race friendly transmission, and if you are attempting to use the paddle shifters you better plan to shift 500-1,000 rpm sooner than you intend. An automatic transmission with manual controls (aka manumatic) will probably never be as crisp as a clutch-based tranny, such as the BorgWarner "Direct Shift Gearbox" (DSG) found in Porsches and Audis or the sequential dual-clutch transmissions used by BMW and Ferrari. But that doesn't mean you should have time to look down at your watch while waiting for the trans to obey your commands. Those of us not afraid to have our tunes tickled can fix this rather easily; however, it would stand to reason that GM would want to fix this before it leaves the factory. Last, but not least, we know that the CTS-V Coupe is still a Cadillac, but does it have to weigh the same as the sedan? Chop off a hundred pounds and a tenth in e.t.-and you'd have yourself a reason to buy the coupe rather than the sedan. As sharp as the coupe looks, I can't help but wonder why you should buy a two-door when you are paying for four.

Since (generally speaking) some people will just buy coupes, because they don't like the idea of four-doors, I doubt the aforementioned facts will bother its sales. Whether in sedan or coupe form, the CTS-V is a tremendous car that should make any informed buyer think twice about going German for the ultimate combination of luxury and performance. We certainly enjoyed our time with it, and had difficulty handing over the keys. To date, we have never been asked for more rides or opinions on the car out of any other cars GMHTP has test-driven. It's amazing how much excitement a little Caddy can drum up. In a sense, Cadillac invented the game, introducing the electric start and the V-8 engine back in the early 1900s, and now they are simply reclaiming it.

Check it out as project STi Killer gets a set of Cadillac CTS-V 6-piston Brembo Brakes, Nitto Tires, and Wheel upgrade. Read more only at www.gmhightechperformance.com, the official website for GM High-Tech Performance Magazine!