Raymond Litz Redefines What It Takes To Build A Killer Street Car With His 8-Second, Ethanol-Powered, Single Turbo Trans Am 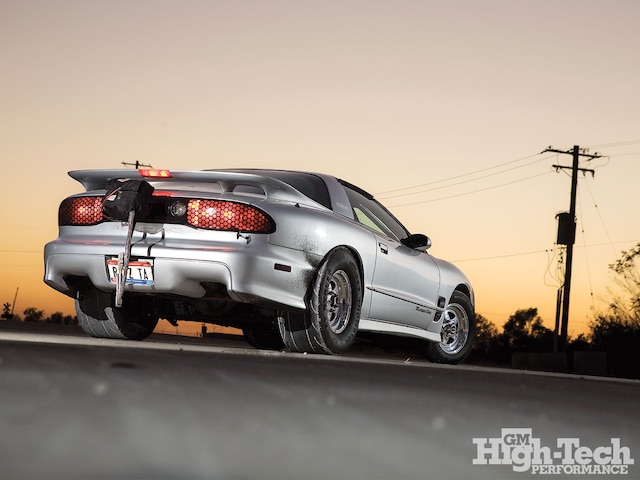 As the sun descended into the horizon and light traded places with darkness, a new beast had arrived on the streets of St. Louis. This monster was unlike any the people of Missouri had seen before, covered in perfect silver paint, slammed to the ground and subtle, but ready to kill at a moments notice. Built specifically for one purpose, Ray Litz's '02 Trans Am is an imposing force in any environment, but on the street, it morphs into something else, something incredibly wicked and intimidating. And, unlike many 8-second cars, this is where Ray's Trans Am feels at home. This 8.29-second rocket was built from humble beginnings in Ray's garage into one of the most formidable LS-powered cars in existence.

Under the hood, Ray's Trans Am is a who's who of high-performance LS engine building. ERL Performance is responsible for the engine block, which is based on a stock LS2 unit but modified to ERL's Superdeck I specifications, using ductile iron sleeves, billet main caps, and a six-bolt per cylinder deck configuration. Kurt Urban was the man behind the engine build, stuffing the ERL Superdeck I with a Callies crankshaft, Wiseco pistons, and Howards connecting rods, taking total displacement to 427 ci. A custom hydraulic roller camshaft of top secret specifications rounds out the short-block, which Kurt topped with a pair of 245cc TrickFlow cylinder heads that were ported, cut, and O-ringed by Total Engine Airflow before being bolted to the engine and shipped to Ray, where the assembly continued in his home garage. "I live in central Ohio farmland country on 14 wooded acres. I have a 28x32-foot shop-that is where all of the magic happens."

Behind the engine, Ray installed a Rossler Transmission's built Powerglide, which receives power from a Neil Chance 4500-stall converter before transferring it to a Strange 3-inch driveshaft. Inside, Ray decided to keep the stock automatic shifter, which he cleverly modified, allowing him to control the two-speed manually shifted transmission, while keeping all of the factory safety features. Since Ray drives this monster on the street and runs in the NMCA True Street class, he spent a ton of time designing a trick transmission cooler, which uses a B&M Supercooler, 12-inch electric fan, and an RB Racing oil pump to keep everything in check. "The system runs off a thermostat in the transmission pan. This allows the cooler to work while the car is not moving and is wired hot so it cools between rounds with the car turned off. The cooling system and fuel pump are located in the T-top well."

All the way out back, Ray stuck with the overbuilt theme and installed a Moser 9-inch rear stuffed with a 3.70:1 ring-and-pinion, 35-spline axles, and a Moser spool. The suspension is pretty standard fare by 8-second rules, with QA1 shocks front and rear, Spohn suspension pieces, and a PA Racing K-member helping to keep the wheels on the ground. Speaking of wheels, Ray went with a set of tried and true Weld Pro Stars and 315/60R15 Mickey Thompson drag radials out back. Ray doesn't think much of upgrading the brakes, since his 166-mph rocket uses a set of "stock brakes, still on the original pads!" Of course, his parachute helps slow him down on the big end, and again, Ray went the extra mile, installing the parachute release cable into his factory emergency brake handle, which keeps his interior clean and functional.

Now, if you've been following along, we know what you're waiting for-details on the incredible Ron Shearer built turbo kit. Well friends, here they are. Starting with a clean slate, Ron first built a set of gorgeous 1.75-inch forward facing turbo manifolds, which merge with a 3-inch crossover before heading into the turbine housing of a massive 91.5mm GT55R turbocharger. From there, spent exhaust gasses head out a 4-inch stainless steel and aluminum downpipe, while fresh compressed air moves towards the front of Ray's engine bay, passing through a custom air-to-air intercooler before being slammed into the intake manifold. Boost control comes from an AMS-1000 controller, which uses CO2 to regulate the TiAL wastegate, while a 50mm TiAL blow-off valve controls the compressed air in the charge piping, as the throttle blade closes. If you've never had a chance to check out Ron's work, we suggest you stop reading for a minute and check it out. It is that nice-it's hard to describe in words. Back with us? Great, let's talk about performance.

"I made five index races this year and won two of them. I went to the semi-finals in the three races I lost. I was the number one qualifier at four of the five races, and of the times I was number one qualifier, my times were 8.900, 8.906, and 8.909." For the one race Ray didn't qualify number one, he took the second spot, missing the pole by .004 seconds. Of course, running the 8.90 index is almost too easy for Ray, since his Trans Am is capable of much more than that, as shown by his top competition run, an amazing 8.29 at 166 mph. Think about that for a second and then consider that this is still a street car that Ray also races in True Street, with a 30-mile cruise and three back-to-back passes! "As far as technique, for me the skill is in the way I set the car up. My suspension, three-step, and boost controller setup do all the work. If I have done my job with the 'tune-up' correctly, I will floor the car after the burnout, stage and launch off the transbrake, and never let off the gas until the stripe."

Did we mention that Ray tunes this car himself, using a stock PCM, HP Tuners, and a couple gallons of E99? That's right, no fancy electronics or race gas here. Ray's 166-mph Trans Am runs on Ohio's finest corn and relies on a fairly simple fuel system to make it all work. The trick at this power level is control and Ray wields the laptop like a master tuner, keeping the air/fuel and timing in check to keep him safe on the track, street, and anywhere in between. "I started modifying the car a couple of weeks after I bought it and never stopped. Without the help and support of the people and companies involved, the car would not have been possible." Of course, Ray also thanks his loving wife, Janice, although he told us specifically not to mention the "one billion dollars" he has spent to get to this point. Don't worry, Ray, your secret is safe with us!

Check out this 2002 Collectors Edition Pontiac Trans Am that features a full SLP exhaust system, Eibach springs and more. Take a look at it only at www.gmhightechperformance.com, the official website for GM High-Tech Performance Magazine!

Read all about Alcides Martinez's 2002 Pontiac Trans Am which cranks out 600hp with a modified LS1 engine/Turbonetics T-76 GTQ turbocharger combo. Only at www.gmhightechperformance.com, the official site for GM High-Tech Performance Magazine.

Check out step by step tech article on how to install a Magna Charger kit on a LS1 FBody only at GM High-Tech Performance Magazine.

Check out Pete Cimino 2002 Pontiac Trans Am WS6 with a LS1 Engine Block and HP Design Wheels, Check it out only at GM High Tech Performance Magazine.

» Read More
2002 Pontiac Trans Am - Flying Under The Radar