1999 Pontiac Trans Am - The Tightrope

Meet Mike Kostick, The First Man To Ever Run A 7-Second Pass In A Stock Suspension, Nitrous-Assisted, LS-Powered Car 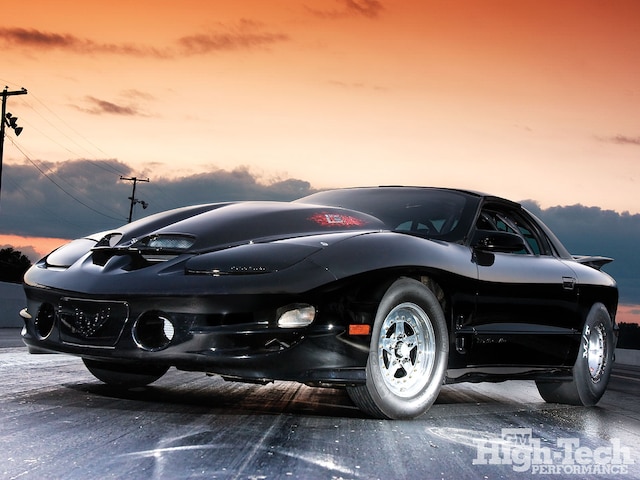 In June 30, 1859, a man named Jean Francois Gravelet became the first person to ever walk a tightrope across the gorge of Niagara Falls. Nearly 1,100 feet long and 160 feet above the water, Jean not only walked the tightrope, he even took a minute to pause, drink some water, and do a somersault, all before completing his death-defying stunt. Up until that day, many had dreamt of doing such an act, but at 5 o'clock, "The Great Blondin" officially sealed his name in the history books.

Do you know who the second person to walk a tightrope across Niagara Falls was? Of course you don't. And do you know why you don't know who the second person to do it is? Because nobody cares about the second guy. In the world of innovation, you're either the first, or you're just playing follow the leader. Enter Mike Kostick, a man from Lombard, Illinois, who recently joined the infamous "firsts" club, by becoming the first stock suspension nitrous-powered LS car in the 7s, an achievement that until recently, many people didn't even think was possible.

You see, for years the world of stock suspension nitrous LS racing has been chasing the goal of a 7-second run. If you would have asked racers 5 years ago, many would have told you that it wasn't going to happen, that a nitrous LS could never be pushed that far. More recently, however, racers began to get dangerously close, and some even began to boldly speculate that they could do it, and, in the weeks and months leading up to the LS Fest (in Bowling Green, KY), a few racers even came pretty close, but, like everything else in life, only one person could be the first.

Being the first isn't all Mike and Jean have in common. In fact, running a 7.91 at 172.00 mph is about as close to walking a tightrope as you can come, an act where everything has to be spot on perfect, where the difference between tire smoke and glory is just a degree of timing, a percentage of fuel, or a pound of air pressure. Get any of those wrong and you're just another 8-second pass. So, how does Mike do it?

It all starts in the burnout box, where Mike's '99 TA heats up a pair of 29.5-inch tall, 10.5-inch wide Mickey Thompson ET Drags, which are wrapped around a set of 15-inch double bead-locked Weld wheels. After a couple seconds of tire smoke, Mike releases the line lock, which frees his Strange front brakes, and he creeps forward towards the staging beams. Up front, a set of Bogart wheels, wrapped in Moroso front tires trip the first bulb, setting Mike up to inch forward, triggering the second bulb when he is ready to rock and roll.

Inside, we can only imagine the racket as Mike engages the trans-brake on his Finish Line Transmission-built Powerglide. With a click of a button and a stab of the foot, the PTC stall converter comes up to its starting line RPM and all that is left to do is let go and hang on. Yellow, Yellow, Yellow, Boom. 1.16 seconds later, Mike's gorgeous black Trans Am is exactly 60 feet from where it started and it is time for the 430 cubic-inch LSX under the hood to really start applying the power.

Built by T&T Racing Engines of Gurnee, Illinois, Mike's 430 started life as an off-the-shelf LSX block, which was bored to 4.200 inches and stuffed with a set of Diamond pistons, built in conjunction with the heads to produce a stout 13:1 static compression ratio. Under the pistons sit a set of MGP aluminum connecting rods, which rotate on a Callies 3.90-stroke crankshaft. We have specs on the camshaft Mike uses, but we're not at liberty to give them away. Suffice it to say, with almost an inch of total lift, the solid roller drivetrain can support a literal half-ton of horsepower, and the early ETP canted valve cylinder heads can flow more than enough air to get everything going.

Of course, as impressive as 930 hp is, the real magic, and the reason Mike is still accelerating like a rocket at the 330-foot mark, is in the induction and nitrous system. For air, the T&T Racing Engines 430 draws from a pair of FAST 4500 throttle bodies, which sit atop a gorgeous sheetmetal intake manifold built by John Marcella. For the real power adder, Mike relies on two separate stages of Edelbrock-supplied nitrous oxide, each of which is responsible for supplying upwards of 250 hp. For those of you not mathematically inclined, that's around 500 hp worth of the giggle juice, making a 930hp engine into a 1,430hp engine, with just the click of a solenoid or two.

By the 660, all the candles are lit, all the power is applied, and the only thing Mike can do now is hope his Don Bailey-supplied tune-up is spot on and do his best to keep everything pointed in a straight line. As fast as the first half of the track goes by, the second happens just a quickly and as he passes the finish line, it's parachute time. Inside the car, Mike probably had no idea that the crowd on the starting line was going wild. He had not only just set the stock suspension nitrous record, a title he has held before, but he had just engraved his name in the history books, claiming the spot of the first ever stock suspension, nitrous-assisted, LS-powered car into the 7-second zone.

Interestingly, for a guy who goes by the moniker "Tuff," Mike took his new record and accomplishment in stride, telling us in a candid interview that "records are meant to be broken" and that he sees several people on the horizon that may well end up taking the nitrous record from him in the near future. "There are two guys that are very close and have the power to do it." To which he added, with a smile, "Of course, if someone does break the record, we'll just go out and break it again." Which leaves us with only one question: What's harder, walking a tightrope or driving a 1500-hp nitrous-fed monster on one?

Mike Hawkey's 96,000-mile 1999 Pontiac Trans Am WS6 took over 5-years to reach its pinnacle and 90-percent of the work was done by Mike in his garage. Click here for more details or check out the April issue of GM High-Tech Performance Magazine