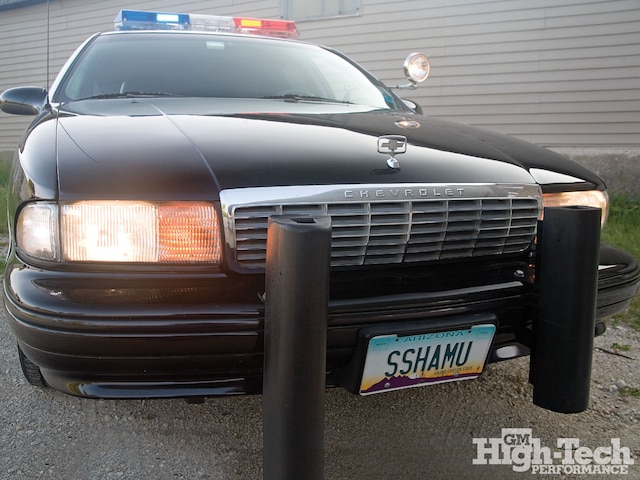 Be honest-when you see the black and white on these pages, a chill runs down your spine. It's not a car you want to see in your mirror, let alone in your favorite magazine. But you're a GM fan, so after the initial shock your thoughts turn to the lump under the hood. You wonder what it'll do. The answer is 12.7 seconds at 105 mph. You think, "Can I outrun that? Does my local law have anything that fast?"

If you're following this line of thought, Chuck Williams has you right where he wants you. Williams is a lieutenant in the Phoenix Police Department with 17 years experience carrying a badge. The Caprice is part of an outreach program designed to direct street racers and other octane junkies to the racetrack, where the need for speed can be satisfied in a safe, legal manner. Williams is a life-long gearhead from a family full of big-block Chevrolet enthusiasts. He has a number of high-performance Chevys and is currently building a '57 with an LS motor.

Years ago Williams got involved in the PPD's Racing for Education program, which campaigned an '89 Caprice police cruiser. That Caprice was trailered to and from the track; Williams felt that the outreach efforts of the program would be better served by a car that could take to the streets as well, so he secured permission to grab an old, used-up patrol car that was destined to be auctioned. Disaster struck on the way home from the auction yard, though. Williams noticed drivers around him waving and pointing, trying to get his attention. He turned around to find the back seat on fire-the prisoner partition had shielded him from the smoke and flame, but it had also allowed the fire to burn unnoticed long enough to ignite the headliner and spread into the trunk.

"The muffler was very plugged up-that's why the car was sent to the yard in the first place," Williams said about the cause of the fire. "But no one told me that!" The fire was extinguished, but suddenly Williams could see a larger-than-expected project ahead of him. He had no choice but to forge ahead-"the next alternative was a Ford Interceptor, and I didn't want a Crown Vic!" he said.

Once the car was back on the road, Williams began bringing it to street racing busts. "We find out about the races both through confidential informants and through MySpace, Facebook, and other online sources," Williams says. Usually the racers gather when prompted by group messages sent to mobile devices, typically about 30 minutes before the meet-up time.

After the bust occurs and while cars are being towed, the racers are being booked, and parents are being called, Williams says he will bring the Caprice in and spend a few minutes with the racers. "I tell them that if they want to meet me at the track, I will race any and all of them," Williams said. "I want to spread the positive message that [going to the track] is the safe way to go racing, and I try to guilt them into coming out."

This strategy of taking his message straight to young street racers seems to be working, according to Williams. "They'll say, 'I remember you, and I'm out here because of what you said.' I know I'm having an effect because I see videos of me racing them on their forums and on YouTube. They may not be saying positive things about me, but they're talking and they're posting, so I know I'm getting through."

The car stands out even in the midst of a police bust, in part because its old-school paint scheme contrasts with the all-white-with-decals scheme of the PPD's regular cruisers. But it's what's under the hood that really sets this car apart. After Williams flogged the car's original LT1 until it died, he sought out the assistance of General Motors in looking for a replacement engine. Years earlier GM had given the police department a 502ci crate motor for the '89 Caprice.

Williams asked at just the right time. GM was in the process of moving from Chandler, Arizona, to a new proving grounds facility in Yuma, and was looking to offload tons of parts. "They had two LS6 engines and two 4L65E transmissions headed to the dumpster," Williams said. GM freshened the transmissions with some new and upgraded components, and Williams added a Comp Cams 224/224 roller before installing the LS6 in the Caprice. With the help of a Street & Performance installation kit, the engine and transmission went in easily. Not so easy was the process of merging the new wiring harness with the car's old one. The budget didn't allow for a trick adapter harness, so the two had to be spliced together manually.Although GM, Wal-Mart, and others donated parts and money for the car's completion, Williams still invested about $6,000 of his own money, of the $20,000 to 25,000 that it cost to build the car.

On his off-duty time, Williams takes the Caprice to a couple dozen events each year, including drag races, road course events at Phoenix International Raceway, and various open community events. "[The car] is better-received than I thought it would be," Williams said. "Both the old and young love it, and parents think it's an awesome thing.

"It really breaks down the barriers between racers and the police, who usually mix about as well as oil and water," Williams added. "Once the racers realize that I'm a gearhead like they are, I get that buy-in from them," he said, and they begin to appreciate the work Williams is doing to keep the streets safe and promote racing at the same time.

Mom & Dad bought this 1966 Chevy Caprice new. Now that junior has it, it has morphed into a turbo-diesel—powered burnout-making freak of nature.

» Read More
How to Swap in a Carb-Equipped LS Engine

The LS engine family has altered the landscape of Chevrolet performance almost as much as Gen I series small-block. But fuel injection is a source of trepidation for performing an LS swap into an older vehicle, so we decided to tag along as AntiVenom performed a 5.3L engine swap on a 1987 Chevy Caprice.

Check out this unique 1996 Chevrolet Caprice Hearse! Arne Toman wanted to break some records, so why not build the world's fastest hearse?! This beast is definitely a unique creature, and the artwork on the hood adds even more character!

A 1966 Chevrolet Caprice was considered a family car back in the day. Bruce Litton's Sandalwood Tan beauty is far from that with the 427 big-block it has underneath its hood.