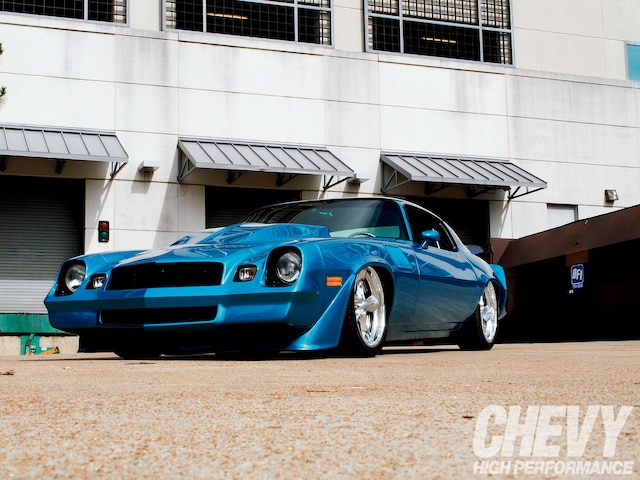 It takes special people to eschew the pack mentality, withstand the smirks and cracking wise behind their backs, especially if the holy grail is sporting rubber bumpers (circa 1978-81). But it's not really about the car. It's about what you do with it, how you expose its finer features, and how you minimize the mundane.

Trent Goodwin knows all about this. He's the Marketing Coordinator for the Comp Performance Group, so you can already see where this is going. He wasn't in any hurry to complete the project, either. This Camaro wasn't some quick sale car, no. It's been part of the Goodwin family since the 26-year-old Trent's formative school days. Indelible, and likely to remain so.

"I was given this car by my father, Clarence. This was my first car ... my high school car," said Trent. "My father and I built this car the first time for my high school ride. It was a wonderful father-and-son project that I will cherish always. Once I started college, I decided to do it all over again, but this time Dad wasn't paying for it. I wanted something that looked fast, sounded mean, and would be an attention getter of the first magnitude.

"Performance was also key to the design. I wanted something that would perform equally well on the track as on the street. This process took six years, but once I was finished and in debt, I can look back and say it was well worth it just due to the fact that not many people build this body style Camaro yet, and I have one of the first ever second-gen Camaros built this way."

Goodwin didn't do everything himself. He conscripted a couple of upper management buds from Comp for helping hands and enlisted the best shops in the Delta for specific contributions. The Mississippi brigade includes Silver Star Customs in Horn Lake (silverstarcustoms.com), BB&T Racing in Southaven, and Ronnie's Hot Rods in Senatobia (ronnieshotrods.com). This cast of soon-to-be-notables built Trent an easy driver that could turn rough in a blink. He likes to take his friends along, too. As such, the rollcage has been modified with a removable rear bar so they can scrunch up uncomfortably in the claustrophobic notch. He shows at Scrapin the Coast and Cruise-in the Coast in Biloxi and Rippin Gears in Tunica.

Trent now has a car that represents the majority of hot rodders. It does everything well. It hasn't got a lot of expensive detail or high-end paint that will inevitably suffer road-rash or worse. Its lines are straight. Its paint is deep. Its mufflers are loud. Sourcing the material to build it was made a little easier by using items from Comp's generous roster: Comp Cams, TCI, and RHS among them. Silver Star gets big props for designing and installing an air-bag suspension system from scratch.

That was the first step in the project script. Once Trent got the car back from Silver Star, he hoisted it on jack stands and dived into the ancient grunge and grease. "I pulled the engine and transmission and turned it into a roller. I removed every part and bolt and either repainted or had them powdercoated." Trent's '79 took Best of Show Motor at Scrapin the Coast '09. Goodwin rocks. Goodwin rolls. Goodwin wins.

Power Pack
No warmed-over little-block for our man Trent. The Mark engine was an option through the '72 model year and was gone for good by the next. But since the big-block had been available in the earlier models, that meant it would be a bolt-in swap for Goodwin's little buddy. BB&T Racing assumed the balancing and blueprinting tasks. They punched the 454 block 0.060-inch and lowered in an Eagle forged rotating assembly: 4340 stroker crankshaft, connecting rods, and pump-gas loving 10.1:1 pistons for a displacement of 496 ci. The valvetrain is all Comp stuff, beginning with the adjustable billet double-roller timing gear. That nasty cacophony, that Hun-like racket from the engine compartment is caused by an 11-602-8 Big Mutha Thumpr (257/243 degrees duration at 0.050, 0.570/0.554-inch lift) cam according to 924-16 dual valvesprings, High Tech pushrods and roller rockers. BB&T sealed the lower extremities with a 6-quart Moroso pan and companion oil pump. Racing Head Service stepped up with 320-cfm aluminum cylinder heads fitted with stainless steel valves. To close the top of the motor, Trent and pals affixed an Edelbrock Air-Gap intake manifold cuddling an 850-cfm Demon and a K&N filter element. An MSD Digital 7 ignition system brings fire; Hooker shorties and a 3-inch exhaust system with Thrush mufflers extract the stink-breath. Though Trent did not release output figures, let's assume this twisted Stovebolt makes at least 600 hp and about the same level of torque. Comp's satellite company TCI provided a beefed 700-R4 spurred by a 3,500-rpm Super Street Fighter stall speed converter. Tendrils from the transmission connect to a remote TCI fluid cooler. So far, the original 10-bolt is OK with the situation, considering its 4.10:1 gear ratio and Posi-Traction differential.

Friction
In the day, most hot rods ran big 'n' littles using smaller diameter tires on the front than in the rear for traction, stance, what have you. Though subtle on most modern cars, Trent's departure broadcasts like blood on a white shirt. He paired Coddington Junk Yard Dog hoops (18- and 20-inch) with P225/40ZR18 and P245/40ZR20 General Exclaim UHP rubber. Lurking beneath those snazzy, slippery spokes are Wilwood 13- and 12-inch discs. How you like this big/little bidness now, cuz?

Silhouette
The wheel and tire combination in league with the adaptive qualities of the air-shock suspension give the '79 a slight rake and an arrow-like aura. To improve its appearance and stretch the lines, Ronnie's guys shaved the door handles, straightened and sanitized the firewall and the windshield wiper cowl, and plopped a hinged 3-inch cowl fiberglass hood right in the middle of it. The paint applied by the boys in Senatobia is GM LeMans Blue, which was available only on the '68 (code UU) and '69 (code 71) Camaro.

Rails
After a stop at Ronnie's to have the subframe connectors inserted, the car went to Silver Star for its custom air-bag suspension. Wouldn't it have been easier to have gone commercial and save sweat and foul oaths? "At the time," confided Trent. "Nobody made an air shock conversion for this car. And compared to the first-gen, the aftermarket still has a rather limited inventory for the second-gen Camaro." Silver Star based the conversion on Firestone air bags, built the upper and lower control arms, retained the standard shock absorbers at front and relocated the rear ones to fit the scheme. Steering gear and spindles are original. According to Trent, "I didn't want to cut the car in any way, but with the car laid completely out [dropped to pavement] I can still run the stock wheelwells, which surprises most people. Silver Star did a great job with it."

Lounge
Where Trent's from, the heat index can reach up to 115 degrees or more, yet he has no artificially cooled air wafting into the cockpit. "Soon!" he croaked from his heat-checked throat. All other creature comforts have been addressed. Prior to any modifications, the car was rewired hood-to-trunk with a Painless collection. Trent's aural gratification comes from a JVC head unit, speakers and tweeters in custom-built kick panels, twin speakers on the surface of the package tray, and two more underneath the dashboard. Ronnie's Hot Rods worked up a custom console to dress up the air-suspension switches and meters. Trent palms a Billet Specialties Stiletto steering wheel and consults vintage-look Stewart-Warner gauges set in a Classic Dash. For the icing, Just Dashes restored the original padding and vinyl application. Look closely to see the tight-fitting rollcage tucked way up and out of sight. The rest of the trappings, including carpeting, are GM reproductions.

Check out this 1979 Chevrolet Camaro Z28 that has a 350ci engine with a 700-R4 transmission. Read more only at www.chevyhiperformance.com, the official website for Chevy High Performance Magazine!

Check out this 1979 Chevrolet Camaro Z28 that has a 540 engine. Find out more about this Z28 only at www.chevyhiperformance.com, the official website for Chevy High Performance Magazine!

Read all about our readers requests, featuring a 1979 Chevy Camaro that caught fire when installing a 770 Holley and much more. Only at www.chevyhiperformance.com, the official site for Chevy High Performance Magazine

Readers rides for this month include a 1979 Chevy Camaro Z28, a 1981 Malibu, a 1967 Malibu SS, a 1968 Camaro RS and finally a 1966 Impala SS. Only at www.chevyhiperformance.com, the official site for Chevy High Performance Magazine.