1995 Pontiac Firebird Formula - Stock - But Not A Rock 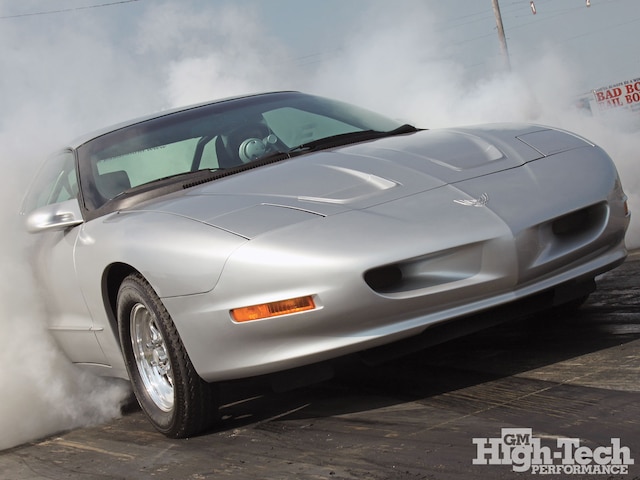 Let's be honest, running 10.9s these days in a street car isn't quite the headline material it was a few years ago. It's quick, no question about it-but it's been done. Jon Beam's Firebird Formula, however, is a member of the 10-second club without an LS motor and the usual mods like a big cam and spray. In fact, his '95 Formula still sports a stock LT1 engine under the hood, albeit with an ATI ProCharger blowing into it. That's right, stock. No cam, no heads, not even forged internals. The same cast crank, rods, and pistons that were originally slipped into the Gen II small-block (with two-bolt mains) 15 years ago. They've stood up to the centrifugal blower's 9 pounds of boost admirably well.

The farthest Beam has dived into the engine was popping off the valve covers to replace the valvesprings and rocker arms. "The intake manifold and oil pan have never been off," Beam told us. "It runs great and has never missed a beat. The best e.t. so far is 10.914 at almost 122 mph." The Formula is an in-house project for his brother Bob's tuning shop, Brute Speed, in Roanoke, Indiana, and it is regularly flogged at Muncie Dragway. Here's one more amazing fact: the engine is barely broken in. Despite its repeated flights down the track, this silver 'bird has covered only about 5,700 miles since new. "I bought the car in 1995," says Beam. "I got a great deal on it, but it was slow. It was an automatic car with a 2.73 rearend." He got to work on the basic bolt-ons, including the typical mods of the day, such as a MAF-which cost horsepower rather than enhance it-underdrive pulleys, colder thermostat, larger throttle body, etc. The culmination of the parts raised the rear-wheel output from a lethargic 190 horsepower to about 240. Keep in mind that the LT1 was rated at 275 horsepower, which was stellar in its day, but the 4L60E slushbox absorbed horsepower like a fresh sponge. Nevertheless, Beam was able to coax some high-13-second runs out the car.

Years later, Beam and his brother Bob operated Exotic Performance Plus, a speed/tuning shop in the Muncie area. That provided the impetus, facility, and opportunity to take the Firebird not just to the next level, but a whole new realm of performance. Sure, there's a ProCharger P-1SC hung on the front of the engine, but it has taken more than 357 horsepower and 343 lb-ft of torque at wheels (on a stingy Mustang dyno) to deliver a 10-second timeslip. "The power is useless unless you can get it to the ground effectively and efficiently," he says. To that end, Beam tossed the factory 10-bolt rear axle and replaced it with a Moser 12-bolt, including 4.30 gears and a lightweight aluminum spool. There's also a full complement of suspension components, including a Spohn torque arm, control arms, and 25mm sway bar along with a BMR Panhard bar and subframe connectors. Air Lift drag bags and QA1 single-adjustable shocks work with the stock springs in the rear. Up front is a BMR tubular K-member and control arms. QA1 double-adjustable shocks and 300-pound springs, as well as Art Morrison travel limiters, comprise the front suspension. The suspension setup is continually tuned and adjusted to optimize launch bite. "You have to experiment to find the right balance for perfect launches," says Beam. "The car has been very consistent and launches hard and straight."

Strong performance from a reliable transmission has helped ensure consistency, too. And despite the lackluster performance of the car's original automatic, Beam stuck with an auto for racing. It's a Rossler-built Turbo 400 with all the drag racing basics: reverse manual valvebody, trans brake, and a Neil Chance 9.5-inch converter with a 4,000-stall speed. The factory transmission crossmember was modified to accept the Turbo 400. A Mark Williams 3.5-inch Duralcan MMC aluminum driveshaft channels torque between the trans and the 12-bolt, where it ultimately meets the pavement via Moser axles and a set of Weld Stars shod with 28x12.5-inch Mickey Thompson ET Street tires.

Now, as for that stock-bottomed LT1, it's true that Beam has never gazed at the rotating assembly inside it, but he's done the necessary work to match the P-1SC blower and its fuel requirements. That meant adding a 52mm throttle body and 50-pound injectors from Holley, which are fed by an Aeromotive A1000 fuel pump and regulator. The only modification to the stock heads are a stiffer set of dual-coil valvesprings from Crane Cams under the valve covers, which raised the seat pressure to about 125 pounds, along with a set of Comp Cams Magnum 1.6:1 ratio roller-tip rockers to add valve lift and because the stock rockers wouldn't work with the dual-coil springs. And just to be clear, everything in the block is original, including the smallish camshaft, which has 0.449/0.460-inch lift, 202/208 degrees of duration, and a pretty wide 117-degree lobe separation angle-not exactly a dream cam for a blower engine. Stock heads and bottom end also mean a stock 10.4:1 compression ratio, too, which is pretty high for a blower. So careful tuning was a must to prevent turning the original hypereutectic pistons into mush. Beam turned to Ed Wright to reprogram the factory controller. There's also an LT4 knock module implanted in the PCM to prevent the ever-common false knock.

Additional engine and underhood details include an ATI damper, MSD two-step launch control (Beam takes off at 4,000 rpm), and SJM alternator relocation kit that moves the alternator to the bottom of the engine, enabling the removal of the power steering pump and air-conditioning paraphernalia. That's good for a significant weight savings of about 50 pounds. This car also uses a lightweight Flaming River manual steering rack. Inside, the Formula is mostly stock looking, but obviously outfitted for the track with a Kirkey aluminum driver seat (the stock passenger and rear seat are still in place), RCI five-point harness, Grant steering wheel (saving the weight of the factory airbag module), dash-mounted Auto Meter tach, and a Wolfe six-point rollbar. Beam also moved the battery to the cargo hatch.

If you look carefully at the specs for this fast Firebird, you'll notice there's nothing exotic in its assembly, but it is running 10s with less than 400 rear-wheel horsepower and a stock LT1. That's not a fluke. Beam is a fastidious competitor who tunes the chassis and suspension to launch effectively. He regularly snags sub-1.5-second 60-foot times with the hard-hooking Pontiac. Minimizing mass is another key to quick e.t.'s and Beam has baselined everything in the car to judge how new parts and other changes affect the race weight, which is currently at about 3,450 pounds. "Every little bit counts," he says. "And you have to be careful, because some important parts intended to support greater performance ultimately weigh more than the stock parts you took off. I found that out with the tubular K-member. For a manual steering setup, it is two pounds heavier than power steering-but it still substantially lighter overall than the stock K-member."

We are suitably impressed with the performance and attention to detail Jon Beam has demonstrated with his low-mile LT1 Formula. It's a testament to diligence, perseverance. and experience. So, for all you LT1 runners out there who think you can't compete with the LS1 crowd, Beam's car proves such thinking simply isn't accurate. You've got to get to the track and work out your combination. And if you can do it with a blower and stock bottom end, we'll be training our cameras on your car next.

Read about this 1995 Pontiac Firebird Formula with a rebuilt T56 Transmission and Eibach Pro Kit Springs, only at GM High-Tech Performance Magazine.

We check out all of the action on day one of the 2018 F-Body Nationals at Memphis International Raceway.

In the February 2014 edition of "Tony's Garage", he responds to more of your tech questions to help you get the most out of your Camaro.

Check out Anthony Green's 1998 Pontiac Firebird Formula! Anthony was once a Ford guy but fell in love with F-bodies when he was younger. He searched for his dream car and found this Firebird Formula.

Bryan Luna's single turbo LSX 1998 Pontiac Firebird Formula WS6 makes Texas-sized power and mid 8-second blasts on low boost thanks to D3 Performance's tuning. Before the rich guys even realize what hit them, this 1,350hp WS6 flashes right on by!

In this chapter of our Lethal Weapon Project, we do a simple prime and paint job on the 383 small-block as well as install a High-Flow EFI Throttle Body from Holley.

In this July 2013 Tech article, we get an update on Jay Heath's 1999 Pontiac Firebird, aka Ashy Larry. With upgraded brakes and a swap out of the converter, Ashy Larry can hit much harder off the line!