This Atypical A-Body Will Lumpp You Up, Cuz 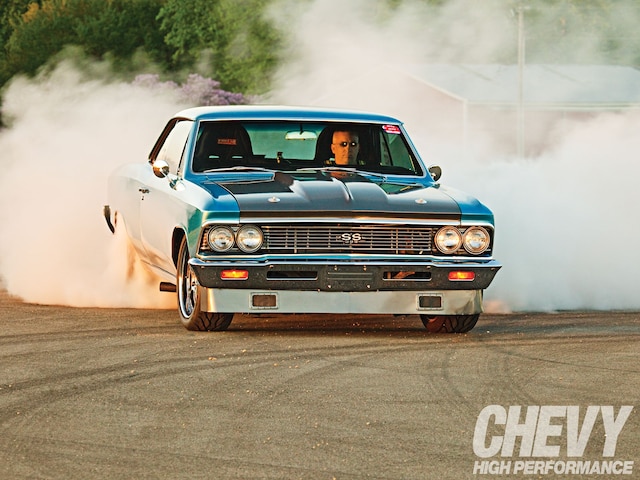 To most, the '66 SS 396 Chevelle ruled by virtue of numbers. It was the ultimate, affordable wise-guy ride, and held much the same attraction for the adolescent masses as would the inevitable Camaro. A big-block engine, all the bling and visual trappings, and those SS runes pole-vaulted it miles beyond anything else on the Chevrolet A-body wish list.

We wanted a subterfuge, a cleaner, less-obvious assassin powered by an engine with millions of reliability miles behind it and no small reputation for ripping and tearing. With a free-flowing exhaust and some Holley and ignition tweaks, the 300lb-lighter small-block Malibu would eat unsuspecting 325 and 350hp 396s alive and shed nary a drop of oil.

In a hot minute, we forsook the poster boy and went for a seriously dark green Malibu hardtop carrying an RPO L79 325hp (actually 350hp) 327 and sheepish dog dish hubcaps.

At 43, Herb Lumpp is too young to remember those mad days; too far removed from the Horsepower Wars of the '60s. But now, you can bolt in a 500-1,000hp motor and move on down the road in confidence-never mind that the engine cost five times as much as the entire car in 1966. Herb's had a hot rod or two, though, and that's where he learned to take matters into his own hands and work the car himself. A bunch of Corvettes and Camaros later, he captured a '66 A-body of another stripe.

"The reason I built this car [the Chevelle] was so I didn't have to beat on my El Camino ("El Camino Real," Jan. '05). The paint was OK so I wasn't worried about messing it up," said Herb. "It was half-restored but not even close to being done. With that in mind, I set out to make it able to hold its own in various types of competition and events, such as the Maxton Mile, Run Through the Hills, and the Optima Street Car Challenge. I haven't had a chance to try the quarter-mile, but I plan to!"

While Herb subscribes to the Pro Touring notion and adheres to driving techniques and skills to navigate a road course quicker than the next driver and just as much as to thread cleanly through a line of cones. His car is strikingly refreshing because it isn't formulaic.

With his Chevelle, Herb has brought a fresh approach and the challenge of making a much heavier car frolic with the best of what's out there.

As a member of the US Coast Guard, Herb is very familiar with protocol and how an order must be executed. He drew his plan and stuck to it. Three years later, his ride was thumping and busting heads. Quite different than the rest, he eschewed the common LS engine for a back-in-the-day big-block. Considering the mission, he couldn't justify the expense of a double-overdrive transmission when a five-speed would suffice. With his safety being paramount, he built the rest of the car accordingly and didn't fall for a full-on chassis re-bop, either. Rather than construct an absolute standout of a car, but one that would suffer numerous minor gaffs in the commission of its duty, he played it cool, saved shekels, and drove the wheels off his new beater.

Herb used what appealed to him, not the packaged hardware most PT suppliants adhere to. Maybe he wanted to find his own way, choosing components that spoke good sense to him. He had a shop rig the eight-point rollbar and then took the project on his own. He replaced some body panels and put a lighter hood on it. He revamped the entire drivetrain, molding it for competition but maintaining its role and its purpose as a street-driven animal that eats asphalt and scatters the bones of the less wary in its wake. Yeah. And nobody helped.

Motor And Drivetrain
Though he knew that the fat-block would add more weight to the front of the car than a small-block or an all-aluminum LS type, Herb couldn't resist temptation-another test of skill to make the car handle and brake like squadrons of lighter fighters with better weight distribution. Kind of like bringing an M2 .50-cal to a 9mm shootout. To make his boss bark, he sent the Mark IV 454 iron block to B&B Machine in Leesburg, Virginia. The cylinders were relieved of 0.060-inch (now 4.310-inch bore) and kept the stock 4.00-inch stroke. Scat delivered a balanced Pro Comp Lightweight 4340 crank and 6.385-inch 4340 H-beam connecting rods with ARP 7/16-inch fasteners to mate up with a set of SRP 10.2:1 pistons replete with ceramic-coated tops and dry-film lubricant on the skirts. The ring packs are from Total Seal, and the main and rod bearing shells received dry-film lube as well. Herb stuffed the short-block with a Comp Cams hydraulic roller (0.612-inch lift, 244 degrees duration at 0.050), Schubeck Racing Roller X ceramic lifters, and a Cloyes double-roller timing set. Oiling is handled by a Milodon road race pan and Moroso blueprinted race pump. The AFR 305 Magnum heads are untouched and sport 2.250- and 1.880-inch stainless steel valves and pass 363 cfm on the intakes at 0.600-inch lift. The heads are equipped with AFR titanium retainers and valvesprings, Jesel Sportsman shaft rockers (1.7:1), and Jesel 3/8-inch diameter chrome-moly pushrods. For the induction system, Herb veered from the usual and invested in an Edelbrock Victor Jr. EFI intake manifold crowned by a Mass-Flo 1,000-cfm throttle body sucking through a free-flowing K&N element. A Mallory sparker shoots juice through Performance Distributors Livewires and timing is 14 degrees BTDC. Junior Stock pioneer Jere Stahl, still going strong in York, Pennsylvania, stepped the exhaust extractors with 2.00-inch-to-2.25-inch primaries and merged them with 3.5-inch collectors. From there, the mixture enters a Dr. Gas 3.5-inch cross-pipe and on to Spin Tech mufflers sprouting 4.0x2.5-inch side-exit pipes. Accessories, save for the Meziere water pump, are connected by a Jones Racing Products radius-tooth drive system. For track days dominated by the Heat Beast, Herb added a Performance Rod & Custom extreme-duty oil cooler in conjunction with a Hamburger remote oil filter mount and block adapter. He used ARP fasteners throughout. Dynamometer output is 619 hp at 6,200 rpm and 570 lb-ft of torque at 4,800 rpm which makes for a good low-rpm response and a little extra steam on the top end (163.50 mph at Maxton). Torque is ordered to the rearend via a McLeod Street Twin dual-disc clutch assembly, a Tremec TKO600 RR (2.87, 1.89, 1.28, 1.00, 0.82:1), and an Inland Empire 4-inch diameter aluminum driveshaft. The end game is a Currie 9+ axle fitted with a Detroit True Trac differential and 3.70:1 gears. For Maxton runs, there's another pumpkin housing with 3.30:1 gears.

Brakes And Wheels
In the Pro Touring scene, the Chevelle's wheels and tires are somewhat diminished in comparison to the 10- and 12-inch norm, but for Herb's plan, they work just as well. Forgeline SP3P rims, 18x8.5 and 19x10, unreel 255/40 and 295/35 BFG g-Force KDW2 rubber. To grind off 160-mph-plus speeds in a 3,750-pound vehicle, Herb opted for Baer 14-inch GT Plus in front and 13-inch Touring in back. Not the high-zoot setup he might have used, but quite enough to sate his penchant for keeping the sheetmetal straight.

Chassis
Nothing ties a full-frame car together better than a well-executed rollcage. The Fab Shop in Pound, Virginia, constructed the safety enclosure/chassis stiffener from mild steel. Herb took it much further. He didn't tumble for any store-bought stuff but rather concocted his own references, eager to feel the results and quite willing to tune the combination for the task. He wings around the track with a front clip utilizing tall, lightweight, forged ATS spindles and a Lee Manufacturing 12:1 steering box. Damping and wheel movement are checked by QA1 shocks paired with Coil Spring Specialties springs rated at a brutal 1,000 lb/in as they jig between tubular SPC Performance adjustable upper and fixed lower control arms. A 11/4-inch Hellwig anti-sway bar completes the change-out. In the rear, adjustable QA1 shocks along with 250 lb/in springs, a four-link setup from Global West, and a 11/8-inch bar.

Interior
Emphasizing the Chevelle's tough-guy persona, the interior is shades of black, from the Kirkey road race seats, carpet and headliner by Ed Combs Upholstery in Huntington, West Virginia, to the Lecarra Mark 4 Supreme steering wheel attached to the Flaming River column. Herb's other essentials include an M&H wiring harness, a Firefox 10lb fire suppression system, a Tremec shifter, neither stereo nor air conditioning, and a very slick answer to the perpetual "Geez, what gauges should I run?" query. None that look like the usual suspects, anyway. In a car that is so mechanically oriented, the soft blue whisper of the Dakota Digital ensemble offers immediate recognition and quiet lighting. Quite a paradox.

Body
The Chevelle wasn't meant to be a sparkler. It was meant to thrash. It doesn't have to be crisp. It accumulates rash. For what Herb has in mind, the '66 Marina Blue (Florida painter unknown) on the not-optimum metal makes its own, gritty statement. This thing is meant to throttle. The previous owner had added two new quarters and a trunk pan. Herb had the Fab Shop build the air dam and settled a Goodmark steel hood over the guts. Wanna rub fenders, bud?