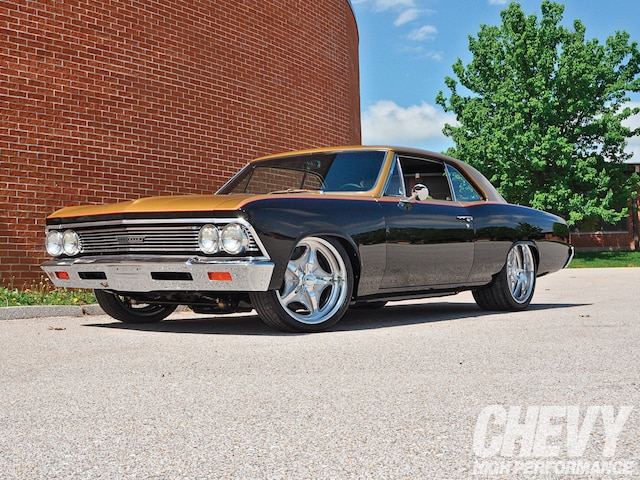 Mark and Rich Mutert have this quirky habit of doing things themselves, not laying off the process to outsiders. It's not that they haven't the resources to hand a project to several unrelated people and wait for the results. They take matters into their hands and chart the progress in real time, so there is no dealing with how slow (paint jail, for instance) the current vendor might be. They also have full-time jobs that interfere with project progress, sucking valuable time from the schedule. As it was, 24 moons waxed and waned over this Moscow Mills, Missouri, trick pony before the job was completed to their satisfaction.

Mark advised: "There's no outside labor in this Chevelle. Rich and I build cars part-time, mostly for ourselves." While the 30-something brothers handled the mechanical aspects, worked the body, and applied the two-tone paint, their parents own and operate Mutert's Auto Upholstery, hence adding the final aspect to the perfect car-building storm.

"As a fan of Smokey Yunick, I wanted the car to have a look similar to Smokey's infamous '66 Chevelle. Not a re-creation or a detailed tribute in any way, just an overall look, with a few things similar to Smokey's car," Mark opined. Carrying the facsimile further, the brothers did up the engine block and transmission in Smokey's favorite shade of custom-blended gold on the rocker covers and the custom cowl cold-air intake system. Like Yunick's magic cars, the Mutert's '66 captures a passel of subtle, nearly invisible cues and modifications.

To encourage and excite, Mark had stylist/illustrator Jason Rushforth lay out some visual adrenaline prior to the beginning of the build. While nowhere near the exorbitant modifications exhibited on Yunick's car (one that featured a smooth bellypan, an aluminum cylinder block, roof lip, re-formed and re-angled front bumper, etc.), the Mutert's ministrations brought the Chevelle to its naked best on a rotisserie. The inside of the big-block puffed up to 498 ci. The transmission is a modern six-speed. Everywhere they could, the brothers instilled the Chevelle with cues from the Smokey original as well as a portfolio of their own understated markings. As an aside, the Smokey car was to get wheelman Curtis Turner back in the driver's seat. Turner was as golden as Petty. Promoters of the era sold lots of tickets on Turner's good name.

"The [accessory drive] pulley system was an important decision for me," Mark confided. "I didn't want a modern looking serpentine system and I didn't want the bulky old system, either. For the alternator, I used a factory-style mount, but attached the alternator on the backside of the bracket for a cleaner look. For the KRC [NASCAR-style power steering] pump, I made a mount to locate it as low as possible. For the A/C compressor, I started with an Alan Grove bracket that mounts off the mechanical fuel pump boss, and then I modified it to clear the frame, block, and anti-sway bar. It's a tight fit but it really helps keep the engine bay clean. To finish off the vintage look, I used tower clamps on all the hoses."

Luckily for Mark, the best painter in the area is brother Rich. Even though all the panels are original, Rich put many hours to get the gaps standardized and to make the metal absolutely straight. The body got a layer of clear and was sanded. Rich followed up with another layer of clear followed by the final cut-and-buff to remove any ripples. The underside of the body, the front fenders and the wheelhouses are all in basecoat/clear black. The engine, engine bay, the top of the front fenders, and the dash were done in a coat of flat clear.

All the work, save for the interior, was completed in Rich's home shop in Foristell. You could say there's lots of smoke, yes, but not a mirror to be seen.

Chassis
Mark took the body off, put it on a spit, and focused attention from the ground up. He welded all the seams on the factory frame, boxed it where needed, and kicked in the rear section 3 inches per side to fit the fat rolling stock he'd be putting in it. He ground all the seams and smoothed them in anticipation of the narrowed (11/2 inches per side) Moser 12-bolt. From the front, he began with Savitske Classic & Custom (Coopersburg, Pennsylvania) adjustable upper control arms and tall ball joints. He also inserted Edelbrock shocks and springs between the custom upper and the refurbished original lower control arms, again fitted with long ball joints. To lasso body motion, he picked a 11/4-inch splined Speedway Engineering anti-sway bar with end levers bent at a custom angle. Ride Tech Posi-Link ends complete that picture. At the back, Mark used Edelbrock upper and lower control arms (uppers adjustable for pinion angle), sandwiching Edelbrock coils and shocks between them. There is no rear anti-roll bar. For another NASCAR taste, Mark included a tight-ratio (12:1) Lee Manufacturing 670 steering box and paired it with a KCR aluminum power steering pump. To clear the exhaust system and give the car some added torsional stiffness, he made the transmission crossmember from heavy-duty stock.

Interior
Before any of the soft stuff grew inside the car, the brothers removed some non-essentials like the factory dashpad, climate control levers, the radio, and various switches. They also replaced the factory gauge panel with a custom rendition housing Stewart-Warner gauges. They put the Vintage Air Gen II controls and vents, and ignition, wipers and light switches underneath the dashboard in a separate panel to keep the space as uncluttered as possible. An EZ-Wire mini 20 harness put all the spaghetti where it should be. There's a CD player in the glovebox. Hushmat hugs the floor. They put SoffSeal weatherstripping around all the body openings and screwed on a MOMO Retro steering wheel. They put the front seat back 3 inches and whisked the '66 to the upholstery shop, a few miles down I-70 to Wentzville. Allen and Agnes run the joint, and from the other renditions that their sons built, they knew The Smoke had to be spot on. Vintage look was the theme. And so it was. Leather and Ultraleather were used throughout, and lots of it. Check out that way-cool bench seat, baby. Check out those door panels. Check out that Ultraleather bow-style headliner. Let's check out the keys and go spin the tires!

Wheels & Brakes
As the car was built with a Pro Touring attitude, the brakes and rolling stock are wonderfully outsized. Polished Schott Velocity wheels are 19x8 and 20x12 wrapped with 245/35 and 335/30 Michelins. The 14-inch front and 13-inch rear discs are from a ZO6 Corvette and commanded by Wilwood masters and corresponding pedal kit.

Body
Aside from what we mentioned above, The Smoke used all the original panels with Mark adding custom work wherever necessary. He built a smooth, uncluttered radiator close-out panel, smoothed the inner fender panels, and extended the control arm openings to close that gap to the engine bay. The firewall was also smoothed and modified to accept the Wilwood triple-master cylinder assembly. In order for the fat T56 to fit the body, Mark simply constructed a new tunnel. He eliminated holes that went nowhere, relocated the factory-style wiper motor underneath the driver-side fender, smoothed the bottom side of the hood, filled the rocker panel trim holes, and shaved the bottom of the inner fenders smooth. Elsewhere, he finessed the rocker panel pinch welds, constructed the 3-inch-wider wheelstubs to retain the factory appearance, and made the bottom of the deck run crisp and clean. Brother Rich rubbed the carcass and painted the lower body PPG Black and custom-mixed Gold for the surfaces above the fender line.

Engine/Drivetrain
The plain yet intricate juxtaposing of little-used colors, craftsmanship, customizing, and imagination entailed in the engine compartment tattoos your frontal lobe and is something you'll not soon forget. For this exclusive envelope, Mark based the 498 on a forged Scat crankshaft and connecting rods swinging KB forged pistons with a 10.2:1 compression ratio. Camshaft is an Edelbrock hydraulic flat tappet (specs unknown) and is accompanied by all the Edelbrock valvetrain goodies. The oil pan, pickup, and pump are stock. Mark built the top of the engine with out-of-the-box Edelbrock square-port heads, Performer RPM intake manifold, and an Edelbrock 800-cfm carburetor. He put many, many hours in the aluminum cowl air intake system. His has a single cowl duct while Smokey's had one on either side of the engine. Though they have a handmade vibe, the rocker covers are stock items. MSD components throw a vibrant spark in the cylinders, the contents of which are extracted by custom 17/8-inch primaries made by Mark and wrapped in Heat Shield. Rich got busy with the mandrel-bent 3-inch exhaust that he bent tight to the undercarriage, over the axle, and terminate at the back of the car. To accommodate the frame kick-in for the wheeltubs, he spent lots of time on this part of the build. Torque is transferred to the T56 by a McLeod twin-disc clutch assembly. Grunt unravels down a custom prop shaft and ends at the 4.11:1 gears on the Posi-Traction carrier.