Seven Seconds Of TSO-Legal Glory, 20 Years In The Making For Dave Fiscus And His Perfect '86 Grand National 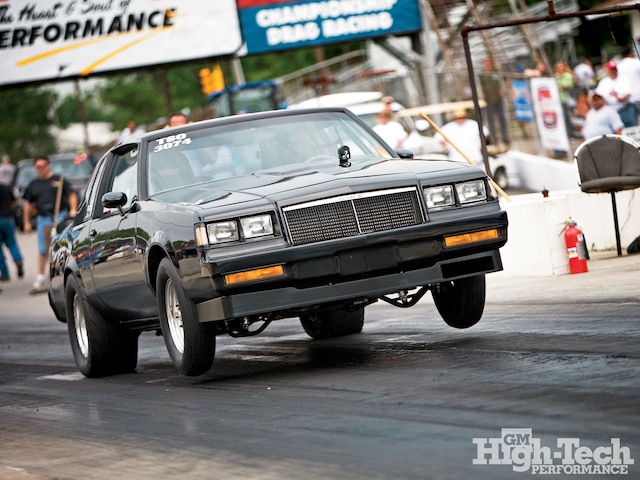 Oftentimes, one of the most interesting parts of a race car is the story of where it came from. You hear about barn finds and divorce sales, but in the hard-core racing world, you almost never hear mention of someone's mother getting them going. For Dave Fiscus, one of the top TSO drag racers in the country, his story is even more interesting than that. "I first fell in love with the Turbo Buick idea in high school, but at the time I could never afford to buy one. During my senior year, I convinced my mother to buy one, hoping she would get tired of it quickly and give it to me. It didn't quite work out that way; she ended up running 12.20s in it and loved racing it. I finally conned her into buying it in 1990, but I couldn't get it from her until 1992." Once Dave finally had the car in his possession, he turned to the streets to start having some fun. "I made a lot of changes the first year I had the car. I added a DFI, a big front-mount, and upgraded the turbo, along with some other good mods. I would street race it nearly every weekend and won a lot of races with it that way. I lost some too, but mainly came out on top." In '95, after three years of daily driving and racing his car, disaster struck when someone attempted to steal Dave's '86 Grand National. "They managed to get the car out of the parking lot, but when they went to turn on to the main road the steering wheel locked. I guess that made them angry, since they keyed the entire car with a screwdriver before leaving. It was horrible."

With his pride and joy in shambles, Dave did what any self-respecting car guy would have done. He stripped off all of the old paint and laid six coats of PPG 9000 Black over the perfect GN sheetmetal, thinking of this unfortunate event as an opportunity to upgrade instead of giving up. After checking out the fresh paint, Dave also decided that it was time to get the Buick off the streets and onto the track. "My friend had a 10-second Grand National and he decided to upgrade to some new heads. I wanted to one-up him, so I bought a set of Stage 2s and we went racing. After that, it just kind of snowballed. In 1997 I decided to get serious and built my first Stage 2 motor. It has been a money pit ever since."

Fast forward to 2006, when Dave turned to RPE Machine in Connecticut to build him an engine that would be highly competitive in the TSO class. For those of you who don't follow the world of Buick racing, TSO is one of the craziest classes in existence, which constantly pushes the limits of the turbo Buick scene. In '06, TSO was barely even a real class, but Dave saw what a few others did and knew that it would grow quickly. To make sure he stayed on top, Dave chose to use a TA aluminum block, which RPE set up around a Crower billet crankshaft and a set of matching Crower rods. Atop those beefy rods, RPE hung a set of JE pistons, which were built to handle as much boost and fuel as Dave could throw at them. "Honestly, to this day I have over 300 runs on the rotating assembly."

Up top, Dave stuck with his Stage 2 cylinder heads, having RPE install a set of T&D rockers and a new "200/200 duration camshaft" (Yeah, we're not buying it either.) before buttoning up the motor and shipping it back to him. During the install, Dave threw on a Stage 2 cast intake manifold, topped with a 90mm Accufab throttle body and some big 160-lb/hr injectors. Of course, we all know the star of this show is the turbo system, which begins with a relatively small 88mm turbo from Precision Turbo. "None of this would be possible without the guys at Rigid Racecars, who built the entire turbo system for me." A set of custom stainless steel manifolds bring the heat to the turbine housing, which then expels the spent gasses out a 5-to-4-inch downpipe and out the back of this GN. A TiAL 60mm wastegate helps control boost, taking orders from a dash-mounted AMS-1000 boost controller. "A lot of how fast we run is in the turbo technology. The better they get, the faster we run. Getting it down the track is another issue, which is made easier by good tuning and suspension."

That tuning comes from none other than Cal Hartline, a name synonymous with record-setting Turbo Buicks. Using a FAST XFI ECU in conjunction with the AMS-1000, Cal has been able to make some big changes to Dave's GN over the years, pushing it harder and harder every race to make sure it stays near the top of the ladder. "I really want to mention TRZ Motorsports and HR Parts for all of their help with the suspension. The TRZ front upper and lower control arms alone dropped my 60-foot from a 1.31 to a 1.27, which is a big difference in this game." Out back, Dave's Grand National runs a pair of HR Parts upper and lower control arms, which articulate a Rigid Racecars 9-inch rearend, stuffed with all of the usual race goodies like 35-spline axles, a spool, and some top secret rear gears. "I was one of the first to use the HR Parts rear swaybar on a car with this power and we had some initial trouble getting it to work. Eventually we realized it was an issue with the chassis, not the bar, and after fixing that, we had no problems with traction."

In regards to traction, Dave has a set of 325/50/15 Mickey Thompson drag radials to thank, which have done a great job keeping him hooked-up going down the track. "The car leaves nice and straight, even at 176 mph it drives very stable." One of Dave's secrets to such an amazing mile-per-hour actually comes from the torque converter. "I had another brand converter for years and it was supposed to be the best of the best. After talking to Dusty Bradford for years, I finally tried one of his PTC-built units. I picked up 10 mph with just the converter change." Obviously, 10 mph is a huge change, which Dusty and Dave attribute to building a converter specifically for the needs of a six-cylinder, large turbo car.

So, what does all of this mean? How about a 7.979 at 176.74 mph, making Dave the second car to ever run a 7-second pass in TSO-legal trim. The other 7? His good friend Tony Gomes, who you may remember from the November '09 issue of GMHTP. "Honestly, if it wasn't for the friends I have made racing Turbo Buicks, I would have gotten out of this a long time ago. All the best friends I have were all made from Buick racing. This community has become a family and without them I would have never made it this far. I have to thank Ken Hagood as well, before him I didn't keep any notes or anything, his work has helped me go much faster than I could have alone." With Tony and Dave both into the 7s now, you can rest assured the friendships and rivalries of racing will continue, bringing us new records and some more amazing Buicks. For now, Dave tells us he plans on taking some more weight out of the car and adding a little more boost next year. We can't wait to see what the new season brings, but we can promise we will be here to cover it.

Check out this 1986 Buick T-Type that has a LC2 block and a TE44 turbo. Read more only at www.gmhightechperformance.com, the official website for GM High-Tech Performance Magazine!

We're celebrating three EFI legends that made GM performance what it is today: the 1984 Grand National, 1994 Impala SS, and the 2004 GTO!

Check out Alan Koprowski's 1987 Buick Grand National! Alan got his hands on this particular GN when he was driving by a nearby shop and made the purchase!