Stepping Up With A True 10.5 Door-Slammer 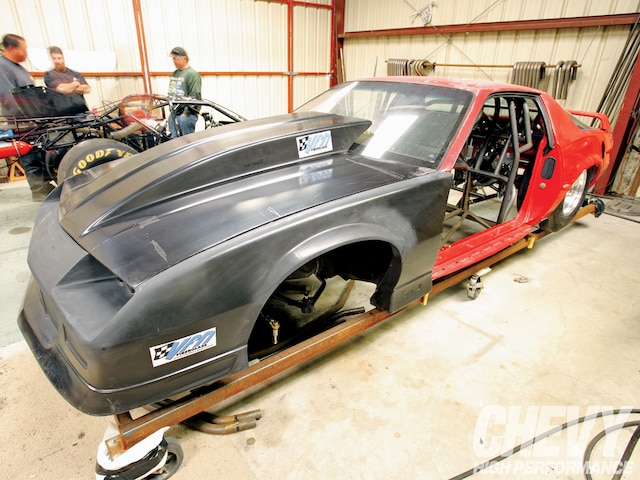 Third-gen race cars seem to be getting more popular as of late, but we've had a soft spot for them for quite a while now. Truth be told, this project has been kept underground in our secret skunkworks lab until we knew the direction to go with it. For the whole story of where this little jewel came from, we have to go back nearly five years, when the original concept was conceived.

Back then, we were contemplating building our own stock suspension car to compete in the wildly popular 275 Drag Radial class. The initial plan was to temporarily place our big-inch 598 into a '71 Nova while our chassis was being built. It's been a learning curve, but the merger worked out so well that we've continued with that program and we're extremely proud of the performance we've been able to extrapolate, running 7-second e.t.'s at well over 182 mph on leaf springs!

Today, our Camaro has a new direction and is already on its way to becoming a dedicated True 10.5 door-slammer under the talented hands of Bill Hickok of Hickok Race Cars in California City, California. While he may be known for building championship cars, from stock suspension to all-out 220-plus-mph Pro Street cars, Hickok also has the same fire behind the wheel, with his own impressive list of wins.

So our chassis guru is burning the midnight oil, transforming the Camaro into what will be a 25.2 certified joyride. Think of True 10.5 as a big-horsepower class that's reserved for stock suspension/back-half cars limited to 30x10.5 tires (W tires are not allowed). The only thing stock-style about this chassis will be from the firewall forward, where we opted to go with a complete Racecraft suspension that bolts into the factory location. Beyond that, the floor has been cut out and we've gone to a complete back-half assembly with all 4130 chromoly tubes from Chris Alston's Chassisworks.

When it comes to weight, like most racing classes, it's dictated by the engine and power-adder of choice. Small-block nitrous cars can weigh in at 2,700 pounds, and naturally aspirated combinations can shed an additional 400 pounds. In our case, we're planning to run a supercharged big-block mill, which puts us at 3,200 pounds. The good news about a chassis car like ours is that it enables Hickok to place the weight where he wants it. And to keep the weight under control, we enlisted the help of VFN Fiberglass and ordered up a complete one-piece front end, a 6-inch cowl hood, doors, and a dash.

As mentioned above, our powerplant is going to be a blown big-block. At the heart of the foundation will be a 540 based on a Dart block with billet main caps. Topping it off will be a set of off-the-shelf AFR 357 cylinder heads. For now, we're planning to start our program with a blow-through carbureted setup, but we may eventually make the move to fuel injection. Our power-adder for this monster is an F3R-139 ProCharger capable of producing up to 2,700 hp-sounds downright insane, right? We're shooting for 2,000 hp figures with the carb setup and we're pretty confident it'll happen.

The magnitude of this build is without question on a serious heads-up level; however, it also gives us the opportunity to showcase the technology available today. What's more, this type of chassis will allow us to dig even deeper into straight-line suspension dynamics and the equipment it takes to safely traverse the quarter-mile at volatile speeds. Our goals? We're shooting for 4.60s at close to 160 mph in the eighth-mile and bottom 7s at well over 195 mph in the quarter-mile. Oh yeah, it's gonna boogie.

There's a lot to be done before we can hit the tarmac, but we'll be here showcasing every step of the journey. In the months to come you can expect a number of detailed stories, from the rearend to the engine assembly, with dyno results. Until then, here's a sneak peek of what we're doing and the people involved making it happen. We'll continue reporting on our exposé with the radial Nova, but for the next chapter, Chevy High Performance is going 10.5 racing with Hickok Race Cars, baby!

Jessie Coulter built this 1991 Chevy Camaro on a budget. It was originally just a commuter car until testing it out at the 2013 LS Fest.