From Pro Street To Pro Road Killer In Six Weeks 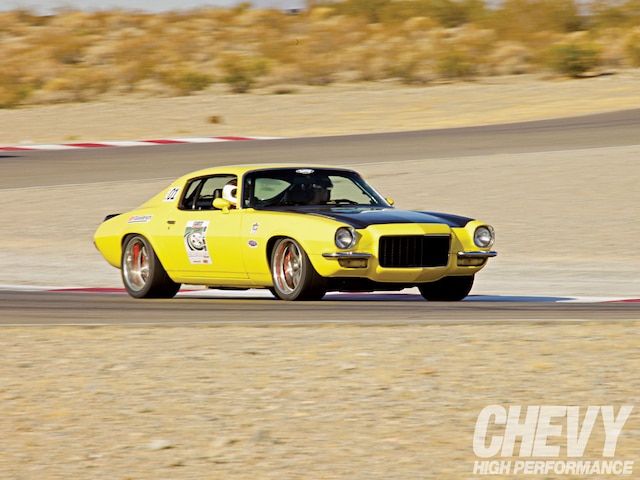 While Brian Finch's '71 looks like it might have been the issue of Detroit Speed, it wasn't. No, the best thing here is that the 40-year-old from Nashville, Tennessee, strung the entire project with his own hands. It comes down to money, of course, but even if Brian could afford a high-end shop to do it, he would have still done it himself. That's the basic and hallowed tenet of hot rodding, pure and simple.

Oh, but the days of building from scratch have all but faded into sepia. You don't need to re-engineer the wheel, either, you just need the best the aftermarket has to offer and piece it together using noggin and opposed thumbs. Yes, DSE components have a great pedigree, thoroughly tested and proven for their worth.

Brian was inspired by DSE's second-gen "Test Car" and if there's anything that sets the autocross/road race phenomenon apart from the rest, it's the rim and tire combination. You harness the tractive power of the biggest available rubber on the widest feasible rims.

Five years ago, Brian posed this car as a Pro Street flashback packed with a ProCharged 454 backed by a six-speed and a 12-bolt with a ladder bar suspension. Time precluded reworking another car so he simply segued into the autocross realm with the car he's had since 1991. It already had quality paint, a full rollcage, and mini-tubs.

"I focused on areas that I could improve upon. The biggest one was massaging the inner fenderwells to allow the massive 295-series fronts, without rubbing issues. That change allowed for an additional inch of rubber per side. It should help at the tight parking lot courses that we run on most of the time. For an additional edge, I went with Anvil carbon-fiber goodies that helped to make my car 200 pounds lighter," said Brian with a gleam in his eyes.

Meanwhile, 200 miles to the east, the annual Run Through the Hills celebration loomed big. Brian drove off, spirits high, car untested. "The car had zero issues and won People's Choice award, beating out all challengers. Then it went to SEMA as a feature vehicle, and after that, from Vegas to Pahrump, Nevada, to compete in the '09 Optima Ultimate Street Car Invitational. I finished sixth place overall out of 50-plus entries. Finally, I drove the car 2,000 miles back home and the fuel efficiency number never dropped below 20 mpg," said Brian with a wink.

Chassis Prep
From whence all good things flow, the chassis received more attention than anything else in Brian's Camaro. You want to be able to bat the throttle and move forward rather than spin a white web off the back tires, so you bring parity to the suspension, make it capable of absorbing and distributing the torque with economy. Brian installed a DSE clip fixed with C6 uprights, tubular upper and lower control arms, anti-sway bar, and remote reservoir AFCO DA shocks sheathed with 450 lb/in coils. He welded in the subframe connectors and continued with the DSE Quadra-Link system out back. Wheel movement is tempered with another pair of AFCO DA remote reservoir dampers with 250 lb/in coils (the fluid canisters perch on either side of the engine, and are fixed to the 10-point rollcage).

Engine & Drivetrain
A mission like Brian's doesn't need a zillion horsepower or 1,000 pounds of grunt. Reliability, repeatability, and the flexibility of a stout torque curve are the goals. In this instance, Brian swapped out his supercharged big-block for an all-aluminum 376ci L92 that he'd upgraded with a Vengeance Racing Stage camshaft, beefier valvesprings, and an LS3 intake manifold and fuel injectors. Further, the less mass Brian had to contend with at the front of the car, the closer to an equal front/rear weight bias he could get. To put the engine in the hole, he used an F-body oil pan to gain the clearance he needed. He built stainless steel headers with 17/8-inch primaries and plugged them into a 3-inch system. For torque transfer, he used an LS7 clutch and pressure plate assembly spinning on an LS7 flywheel. He retained the Viper six-speed from his Pro Street combo and had Denny's build a steel driveshaft to connect with the DSE 9-inch (narrowed to 54.75 inches flange-to-flange) featuring 3.89:1 gears on a Detroit Truetrac differential and completed with 31-spline axleshafts.

Body
Here it's clean, trim, and unruffled. The Anvil carbon-fiber hood, decklid, and wing were left natural while Hot Rod Transformations in Hermitage, TN, applied the Zinc Yellow base/clearcoat. A smattering of tastefully applied event and product signatures give the car a nostalgia vibe that's difficult to deny.

Interior
Even lashed-down road cars need creature comforts. As such, Brian installed Painless wiring to service the Vintage Air HVAC system and the Pioneer CD player. He fabricated a dashpanel to capture the full complement of Auto Meter gauges. New carpeting underlays the Procar seats that Brian swathed in leather; four-point belts are anchored at the floor and the crossbar of the 10-point 'cage. Brian depends on a Hurst shifter and, just in case, a fire extinguisher within easy reach.