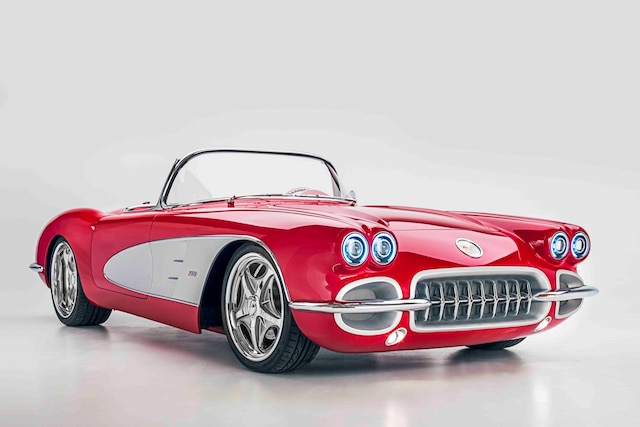 Half a lifetime of owning and tending to a farm is hard work—so we are told—and not everyone that puts in the years is rewarded in the same capacity. For Derek Eisenbeisz and his wife, Eileen, though, keeping their noses to the proverbial grindstone did pay off. How they decided to make use of their positive financial situation was part investment and part dream fulfillment. Yup, you guessed it, they bought a Corvette.

But not just any Corvette; Eisenbeisz had this planned years in advance. He needed a 1958-’60 C1 Corvette because, “It’s an iconic body style that’s so sought after,” and he wouldn’t have it any other way. The specific car that Eisenbeisz ended up with was a 1960 model that was somewhat of a barn find. A good friend of his had it sitting around for about a decade, waiting for a restoration to begin that he just never got around to. The Corvette was all there and not in the worst of conditions, but it had been completely blown apart in preparation of the restoration.

After purchasing the Corvette, Eisenbeisz sent the ’60 over to a shop not too far from his home in Bowdle, South Dakota. You could say that things went south and he ended up cancelling the build—which is a story for another day—and taking the car back home. Eisenbeisz’s search for another builder was short lived as a friend quickly recommended Paul Atkins Interiors in Hanceville, Alabama. Now, in case you haven’t put two and two together, Alabama is no stone’s throw away from South Dakota, but at this point that wasn’t going to stop Eisenbeisz from having his dream Corvette built. He got in touch with Paul Atkins and began working out how the Corvette would be built. “The Eisenbeisz’s vision was a car that handled and drove like a new one but looked vintage to that year,” Atkins recalled. But, getting all the details worked out took time. Lots of time. The process included regular phone calls, renderings of the Corvette and even a handful of trips to Paul Atkins Interiors, which is 1,300 miles each way for Eisenbeisz.

The basis of the Corvette restomod build ended up being a complete tube chassis from SRIII Motorsports. The custom chassis utilizes C4-style independent front and rear suspension with JRi coilover shocks and forged aluminum control arms. An upgraded Dana 60 differential with a 3.42 rear gear and limited-slip was chosen to ensure reliability and durability considering the big power they would be throwing at it. The final piece of the chassis was a set of Wilwood disc brakes with six-piston calipers at all four corners. As for the big power mentioned, that would be thanks to a supercharged, 650-horsepower LT4 crate engine from Chevrolet Performance. “So many builds are one of one,” Eisenbeisz told us in regards to mechanical components, and he didn’t want that. He said the plan here was to use as many factory parts as possible, “So down the road when we need a part it’s not mixed and matched.” That way, they can just run down to their local Chevy dealer instead of bringing the car 1,300 miles back to Atkins’ shop for an otherwise easy fix.

OK, continuing on with the juicy powertrain details. Paul Atkins Interiors fabricated a complete exhaust system out of mandrel-bent tubing from the Chevrolet Performance exhaust manifolds all the way back to a pair of Borla mufflers. Behind the LT4, Eisenbeisz didn’t want a lazy old automatic, so instead a TREMEC six-speed was chosen to send power back to the Dana 60 rearend.

As for the exterior of the Corvette, the goal was to keep things looking classy. That meant a mile-deep PPG Victory Red paintjob done at Paul Atkins Interiors and a tasteful amount of chrome done by Dan’s Polishing and Chrome in Adamsville, Tennessee. But before all that, the fiberglass body got a complete makeover. According to Eisenbeisz, “The rear fenders were widened to accommodate wider tires and the front was widened to match.” Both bumpers were then tucked and the factory tiger-tooth grille was replaced by a one-piece molding and then set further into the front of the C1. “A lot of people can’t tell the difference,” said Eisenbeisz, “but the people that know what to look for love it.”

Another detail that not everyone is guaranteed to notice are the badges. “Z060” they read, detonating the combination of the modern Z06 powerplant under the hood and the model year (’60) of the Corvette. The final piece of the puzzle to wrap up the exterior of the car and translate all the modern suspension and power to usable performance are the wheels and tires. The wheels chosen were a staggered set of Schott Velocity rollers measuring 19x8 in the front and 20x10 in the rear. Hankook Ventus V12 evo2 225/40R19 and 275/35R20 tires make sure all that power gets to the ground and stays there.

Transitioning to the interior of Eisenbeisz’s 1960 Corvette it was all about combining the classic C1 style with modern tech like climate control and a killer stereo system. Speaking of which, the Corvette was fitted with Vintage Air’s Gen IV climate control system. Then, in went a Clarion head unit paired with Rockford Fosgate and Hertz Mille Pro series speakers boosted by a Kenwood five-channel amplifier. Another standout piece of tech included custom Dakota Digital VHX gauges made specifically for Paul Atkins Interiors. Finally, the whole cabin was covered in Lipstick Red leather and carpeted to match. Finally, a 14-inch steering wheel from Billet Specialties’ D-Shaped Collection was installed to compete the look. Paul Atkins Interiors certainly lived up to their name with the design and execution inside cabin of Eisenbeisz’s Corvette.

Before they knew it, the two-year build process was completed and the Z060 was headed back home to their farm in South Dakota. The Corvette has spent the last two summers cruising the wide-open expanses surrounding the Eisenbeisz’s hometown and wowing the crowds at local car shows. While this little Corvette might have humble roots living in the daydreams of a rural farmer, its stunning good looks and brutal LT4 power mean it’s far from it. Vette