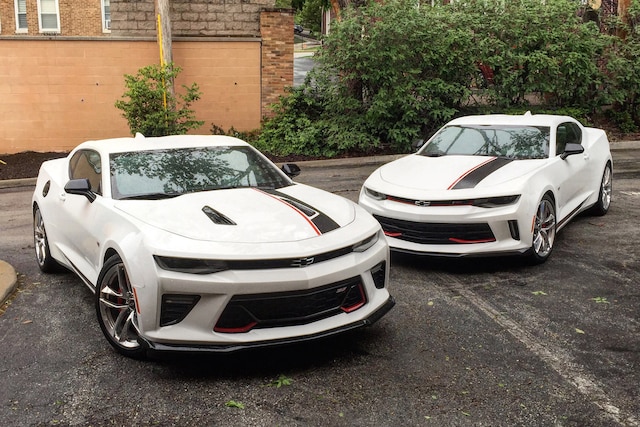 As the 2017 HOT ROD Power Tour presented by Chevrolet Performance and driven by Continental Tire rapidly approached, the time came to pre-run the route. The whole point of Power Tour, the world's largest traveling car-show, is a week of pure driving bliss behind the wheel of your favorite ride. To ensure that's exactly what happens, the HOT ROD team dispatched staffers to both ends of the 1,500-mile route. They're mission was critical: check the accuracy of the route directions, verify road conditions, and shovel down as much Kansas city BBQ as they could get their hands on.

Was a rental car up to the task? Probably, but that just ain't our style. Instead, Chevrolet Performance kindly loaned us a set of wicked, hopped-up Camaros. Feature Editor, Brandan Gillogly called dibs on the first, an LT1-equipped SS, while Staff Editor Phillip Thomas hopped into the cockpit of a turbocharged and tech'd out RS. After 600+ miles each, here's what they had to say about the newest-gen Camaro.

The 2017 Camaro SS we took on our final leg of the 2017 HOT ROD Power Tour pre-run was equipped with a slew of Chevrolet Performance accessories. The most striking exterior modification was the suspension package that lowered the car about 3/4 of an inch on 20-inch Chevrolet Performance wheels. The suspension was developed by the same engineers that designed the sixth-generation Camaro and adds even more handling prowess to the already capable SS. As we didn't track the car on our trip, the biggest advantage for us was the improved look, tucking the tires into the wheelwells for a nice stance without compromising the ride quality. Our SS also got upgraded Brembo front brakes with red six-piston calipers and several appearance upgrades to match. An off-center black and red hood stripe package is complemented by rocker stripes, a black fuel door with carbon fiber accent, black lower fascia extension, a black Bow Tie in the grille, and red painted grille inserts. Under the hood was a performance air intake and engine cover, also from Chevrolet Performance. Finally, a performance exhaust gave the 6.2L LT1 a fitting roar.

On our 600+-mile trip checking the Power Tour route, we appreciated the exhaust, revving the LT1 through every tunnel and underpass we could find, but with the rev-matching on the 6-speed transmission, we also go to hear the exhaust snarl each time we came to a stop and shifted down through the gears. We found the lowered suspension to be perfectly comfortable on our pre-run and it ate up the back road miles easily. When we were through, we tallied a 24mpg average, very respectable considering the car's performance.

It has bark and it'll bite, but the 2.0L turbo-four in the 2017 Camaro RS is probably one of the thriftier HOT ROD Power Tour machines on fuel costs that is, if you keep your foot out of the boost! Our 275hp LTG-powered RS was equipped with several Chevrolet Performance options, including Recaro seats, performance exhaust (no stereotypical four-pot rasp here; instead the LTG has a booming growl, with quick up-shifts met with a satisfying crackle-and-pop on occasion) lowered suspension, aero-package (with Gurney Flap rear spoiler), Brembo six-pistons, and more options showcasing the list of toys that can be bolted to even an entry-level Camaro.

The result is a capable and approachable sport coupe, though we know there's a bit more throttle response hidden with a potential tune. Boost starts to come on at an impressively low 2,500 rpm, with an enthusiastic surge in acceleration as the LTG hits peak torque (295 lb-ft.) by 3,000 rpm. The six-speed is a joy to use, and the pedals are well spaced for heel-toe downshifts. GM spent a wealth of time in drivability tuning, too. At low speeds, where four-cylinders tend to suffer more driveline "bounce" and "lugging," GM has mapped the throttle to round-off inputs, keep the throttle cracked open to hold the next up-shift rpm, and other small tricks to bring some finesse. They're small inputs by the ECU, none of which interrupt a proficient driver, and they mask much of the roughness typically associated with four-cylinder powertrains.

What else are four-bangers known for? Average fuel economy swung between 24 and 28 mpg depending on how often we were asking for boost from the twin-scroll turbocharger, adding more than a few miles to our distance-per-dollar ratio compared to the 455hp LT1-powered SS. It's still good for a six-second sprint to 60 and a 14-second quarter-mile, so it'll hold its own to more than a few V8 adversaries.

Before you know it, it will be time for tens of thousands of muscle cars to pilgrimage to the 2017 HOT ROD Power Tour. Whether you're in for a day at one for the 7 venues, or in for a week as a diehard long hauler, the event is a genuine gearhead blast and one you just can't miss. For more information on the 2017 HOT ROD Power Tour, click HERE for the event info page or type www.hotrod.com/events/power-tour into your browser bar.