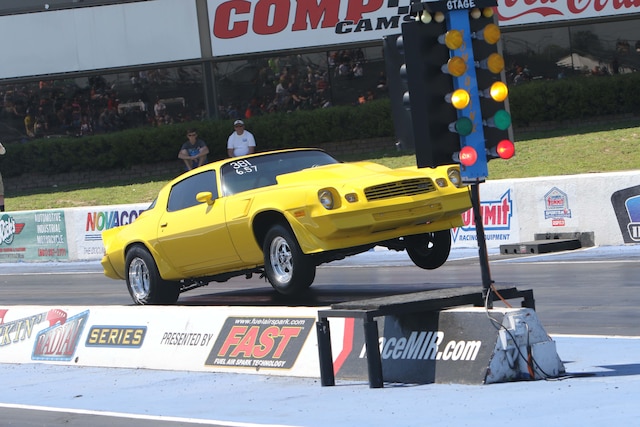 Saturday was record setting crowded and there was a lot of fierce action on the drag strip. Combine that with a packed-to-capacity car show area and made for great day. Spectators had all-of-that plus exhibition wheel stand and jet cars. The Queen of Diamonds had the crowd roaring with her 295 mph blast down the tract! In addition, the various bracket classes were thinning down their ranks in order to find out who would take home the cash prizes and all-important bragging rights.

Sunday started strong with the bracket eliminations continuing and new cars showing up for the car show area. While Sunday had Editor Choice awards, today was all about the “best of” awards for the various classes with winners taking home very nice Super Chevy Show jackets. Again, perfect weather was enjoyed by everyone.

The swap meet kept going strong and the vendor midway was very busy, especially at the Chevrolet Performance tent where they were showing off a new ZL1 Camaro, Grand Sport Corvette and a huge assortment of crate engines including their connect-and-cruise systems.

So as this event wraps up the next show, in Palm Beach, Florida, is getting ramped up and ready to rock.

So what is the Super Chevy Show? Well, if you’re a Chevy fan it’s an event you don’t want to miss! The next Super Chevy show will take place April 21-22nd at Palm Beach International Raceway in Palm Beach, Florida and as always it will have a car show, drag racing, exhibition cars, and a swap meet. To check out the complete 2017 event schedule, and find out more about what the show is all about, be sure to visit superchevy.com.