Chevy powered drag racing action at Friday’s test-and-tune session for the seventh event of the 2017 season! 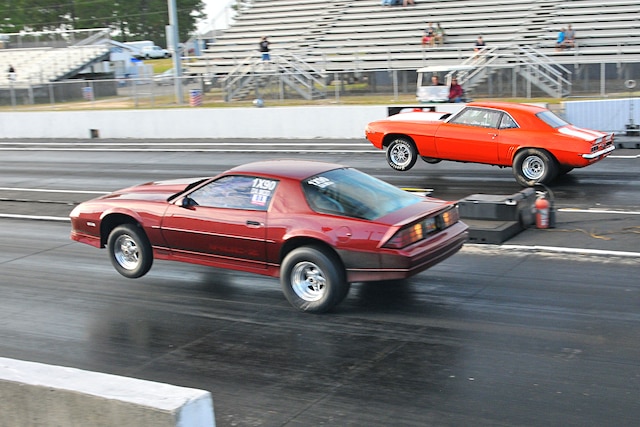 The Rock, as Rockingham Dragway in North Carolina is known, is playing host to the seventh Original Super Chevy Show for this season. The main event takes place on Saturday, but as is tradition, Friday is open for test-and-tune runs down the drag strip. As people snuck away from Friday’s work duties the track became busier as racers came down to get their rides dialed in for the big dance on Saturday. From what we saw the track seemed to be hooking up great with lots of front tires lifting off as the back tires grabbed some serious traction.

As we said, Saturday is the main event with a car show, vendor midway, and an exhibition jet car in addition to all of the drag strip action. The car show competitors will be trying to take home a Super Chevy Show jacket and bragging rights until next year. On the drag side there’s some serious money up for grabs in the various bracket classes. The one thing that binds all of these cars together is that they are Chevy powered.

So what is the Super Chevy Show? Well, if you’re a Chevy fan it’s an event you don’t want to miss! The next Super Chevy show will take place October 13-14th at the Tucson Dragway in Tucson, Arizona, and as always it will have a car show, drag racing, exhibition cars, and a swap meet. Tucson is the last of the expanded eight shows this season, to find out what’s in store for 2018 be sure to check superchevy.com for updates.

Coverage of the 2017 Super Chevy Show at US 131 Raceway Martin, MI with coverage of Friday’s test-and-tune drag racing.