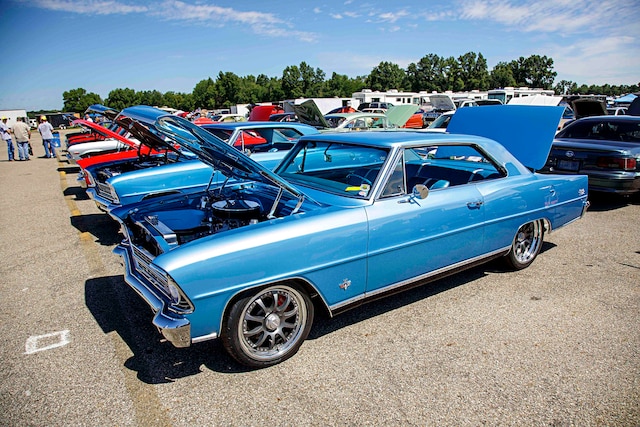 While the cars were fighting it out on the drag strip for a slice of the prize money pie hundreds of beautiful Chevys and other GM nameplates were at the National Parts Depot (NPD) car show. Here show points would decide who took home a trophy, or better yet, one of the very cool Super Chevy Show jackets once again being handed out to the top cars.

Of course this event had more than just car show and drag race. There was a killer swap meet, vendor’s midway showing off the latest trinkets and a Chevrolet display of killer 2018 cars along with the hottest crate engines on the planet. In addition to the regular brackets there were also jet car and wheel stander exhibition runs.

But, let’s be honest, the car show was a huge draw for many of the spectators that came out to enjoy the weather. Row after row of cars fit to drool over. Stock and restored? Yep, there were some of the nicest ones around on display. Customs? Hell yea, pro-street, pro-touring, restomod, there was a little bit of everything spread around the paddock. No wonder this is one of our favorite events of the show season.

So what is the Super Chevy Show? Well, if you’re a Chevy fan it’s an event you don’t want to miss! The next Super Chevy show, the 6th of 8 shows this year, will take place August 19-20st at Maryland International Raceway in Mechanicsville, MD and, as always, it will have a car show, drag racing, exhibition cars, and a swap meet. To check out the complete 2017 event schedule, and find out more about what the show is all about, be sure to visit http://www.superchevy.com/events/super-chevy-show/ .