Sunshine State Of Mind: The Original Super Chevy Show rolls into Florida for the second show of the 2017 season 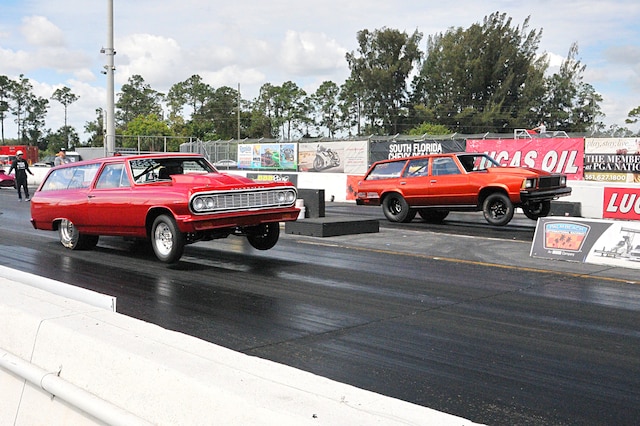 For the second stop of its extended 2017 summer show season, the Original Super Chevy Show rolled into Palm Beach International Raceway in Jupiter, Florida, for two days of racing and showing off. Friday was set up for drag racing test-and-tune runs Saturday was set up for the main event. Like all Super Chevy events, this deal had something for everyone. For those that run their cars hard there was nearly non-stop drag racing where hundreds of Chevy-powered rides fought it out for a slice of the sizable prize money pie and the accompanying bragging rights. And, while the various brackets were battling on the dragstrip the participants on the car show side were trying to take home a trophy or maybe one of the coveted Super Chevy Show jackets up for grabs. For spectators there was all the above plus exhibition runs by jet cars and an awesome wheelstander.

And, if that wasn’t enough there was a sizable swap meet where Chevy fans tried to score deals on that hard-to-find widget for their own project, along with a vendor midway were companies, including Chevrolet Performance, showed off the latest and greatest must-have wares. Put it all together and it made for a great Saturday of Chevy-powered action and eye candy.

Super Chevy Shows are magnets for Tri-Five Chevys and Palm Beach was no exception. This stunning ’55 Nomad custom was brought to the event by Daniel Cassiani of Boynton Beach, Florida.

It’s hard to ignore a Hugger Orange Camaro, especially when it’s as clean as the’69 RS/SS big-block F-body owned by Jack Hunter.

The Super Chevy Shows aren’t just for the classics. In fact, any GM ride can attend and there’s always a huge array of modern muscle, like this ’13 ZL1 owned by David Thornton, in attendance.