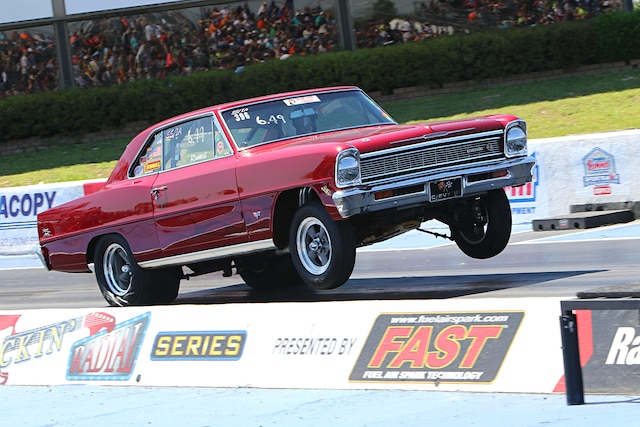 Perfect spring weather and huge crowds helped kick off the 2017 Original Super Chevy Show series in Memphis at the Memphis International Raceway. It’s a great venue and always one of our favorite events of the year.

Saturday had a record setting crowd and there was a lot of fierce action on the dragstrip. Combine that with a packed-to-capacity car show area and the result was three days of Chevy-fueled good times. Spectators had all of the above plus exhibition wheelstand and jet cars to get their fill of weekend fun. The Queen of Diamonds had the crowd roaring with her 295-mph blast down the track! In addition, the various bracket classes were thinning down their ranks in order to find out who would take home the cash prizes and all-important bragging rights.

Sunday started strong with the bracket eliminations continuing to shed cars and new rides showed up for the car show. While Saturday had the Editor’s Choice awards, Sunday was all about the Best Of awards for the various classes with winners taking home Super Chevy Show jackets, trophies, and considerable bragging rights.

The swap meet was strong and the vendor midway was packed all weekend, especially at the Chevrolet Performance tent where they were showing off the new Camaro ZL1 and Corvette Grand Sport as well as a huge assortment of crate engines, including their Connect & Cruise packages. Be sure to check superchevy.com for a full list of the remaining 2017 events. If there’s one in your area be sure to come on out and be part of the action!

As always, Saturday at the Memphis event was packed, especially when the Pro Mod and exhibition cars fired up. When not checking out the racing, the spectators could wander around the car show area, swap meet, or vendor midway.

We typically end up modifying our classic Chevys, but that doesn’t mean we don’t love seeing one that’s in factory trim. This Daytona Yellow 1969 Camaro RS Z/28 owned by Jack Tayler was stunning, had a ton of rare options, and only had 19,000 miles on the odometer. For having such a killer ride, Jack was awarded one of our five Editor’s Choice awards.

Another treat for the spectators was that they were running a Nostalgia Pro Street exhibition class with some very cool Chevys showing off.