Are You Shocked To Learn That A Chevy Won The 3rd Annual Optima Ultimate Street Car Invitational? 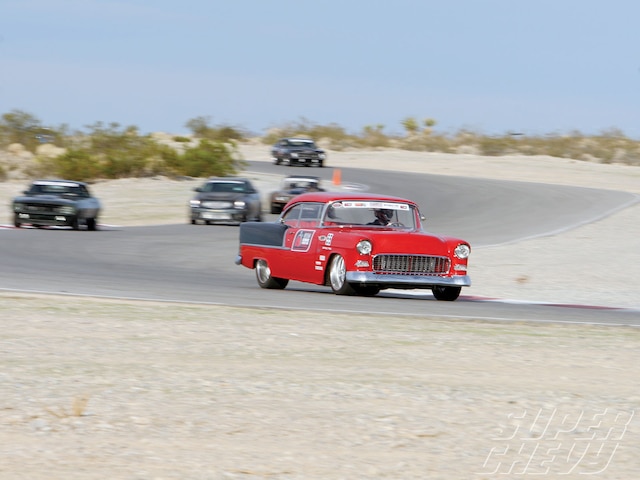 If you thought the SEMA Show was full of just good-looking cars that never get beat on, think again. Thanks to the Optima Ultimate Street Car Invitational (OUSCI) held November 6, 2010 at Spring Mountain Motorsports Ranch in Pahrump, Nevada, 40 of those beauties got put to the test. Now in its third year the event has really raised the bar on street-car competitions.

All vehicles must be highway-legal and pass a basic safety and technical inspection at the track before the Invitational begins. Cars that are invited to the event compete in five separate categories: road rally, road race, autocross, speed stop challenge, and design challenge.

The event started in the wee hours of the morning with a drivers meeting, where everyone was put into groups and given a breakdown of the events and courses. After the meeting the drivers ran their car through tech to make sure everything was safe, and also to ensure they were riding on 200 treadwear or higher tires. After that each group of vehicles was led on a few parade laps to get familiar with the course.

The only part of the event that was held prior to the drivers meeting was the road rally. This was basically a cool way to get all the competitors from the Las Vegas Convention Center out to Spring Mountain. There were 10 points available for the Rally if the competitors met for a group photo, stuck on the event decals, got two photos of their car in front of an iconic Vegas landmark, and travelled the 70 some-odd miles to Pahrump. This was a sneaky way to make sure all the vehicles could be street driven.

The road race portion was held on a 2.2-mile section of the racetrack that features multiple banked and off-camber corners along with a long straight that let the drivers lay the hammer down and wind out the engines. Each car was allowed three timed laps with the best lap put into the record. The driver with the best time received 25 points while second place got 22, third got 20 and so on all the way down to 20th place, who received one point. This is pretty much how all the points were awarded.

The autocross course can be considered the road course's angry little brother. The course tested how quick the drivers could pilot the vehicles through tight turns and chicanes without clipping any cones. Then there was the Speed Stop Challenge, which is a timed even that breaks down to this: hammer the gas and then stomp the brakes till you stop inside the marked out area.

The design challenge portion of the event is where the cars are judged on style and build quality-simply put, the nicer the car, the more points it could receive. There were only 15 points available to the winner and this one only paid out to 15th place.