Newsletter
Sign Up today for our FREE Newsletter and get the latest articles and news delivered right to your inbox.
Home
GM High Tech Performance
Events

Can't stop, won't stop: the Buick boys were at it again in Bowling Green for the 31st Annual GS Nationals. 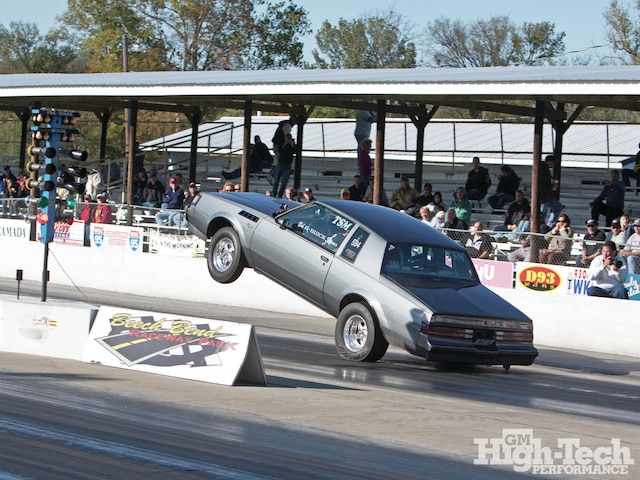 Year after year the Buick faithful flock to Bowling Green, Kentucky, for the annual GS Nationals, an event that has been a staple of the Buick racing community for more than 31 years. While a slowing economy and aging enthusiast base may seem like important factors in any discussion relating to overall event turn out, the week of October 17-23, 2011, proved that you just can't ever count these racers out, as new classes have been added to the event and the ladders have continued to fill up, aging community or economy be damned. And while you may be tempted to think that the GS Nationals is just the same event over and over, that couldn't be further from the truth, as we were on hand to talk to a couple of relatively new racers with all-new cars as well as veteran sportsman rocking brand new hardware for 2011. Everywhere we turned racers were posting up blisteringly quick elapsed times, lowering personal bests and class records as if the turbo Buick scene had just begun.

Turbo Hot Street has seen tremendous growth since its inception, with 18 cars making the qualifying ladder and times ranging from 13.23 to 9.776 at 137.29mph, a new class E.T. record set by Clay Willmott. Turbo Stock Appearing, a purists' dream, saw 5 cars in the tough class, which goes through an incredible pre-race tech under the eagle eye of Richard Clark, who has been known to bounce racers for items as small as an unauthorized Zerk fitting on a trailing arm bushing! Yes, these guys are good and the racing is tight with almost every car in the 11-second range. Many racers double up in the alcohol injection class, TAI, which was won by last year's runner up, Jack "JD" DiLorenzo. Turbo Street Outlaw and Turbo Street Modified were, as always, crowd favorites, seeing low 9-second passes in TSM and low 8-second blasts in TSO, which was won by Dave Fiscus with an 8.330 at over 164mph. Go forth Buick fans, and check out all of the wheels-up and turbocharged action we've brought back from the GS Nationals. And who knows? Maybe we will see you in attendance next year...