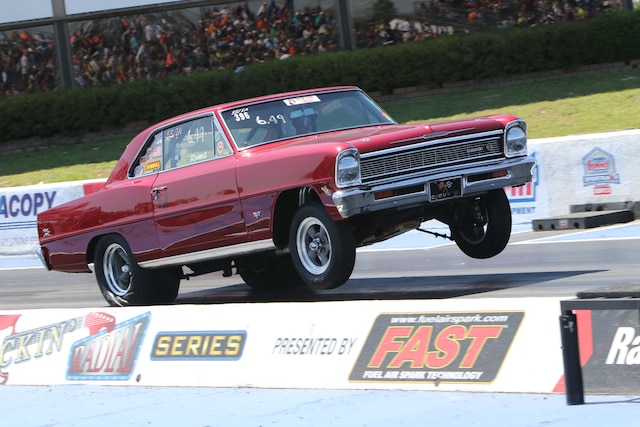 It’s been a crazy Saturday at the 2017 Memphis Original Super Chevy Show where spectators filled the stands to check out all the drag strip action. And there was certainly some action. 200+ mph jet cars? Check. Pro Mod cars? Check. Crazy fast Dixie Door Slammers? Yep, there was a whole group of them. And that was in addition to the hundreds of cars trying to take home a slice of the prize money pie.

Oh, and as an added bonus for the crowds there were actually three jet cars showing off in addition to a smokin’ hot wheel-stander exhibition. Track oil downs and problems were few, so the day stayed on schedule and the racing will be going into the night.

On the car show side, the judging was finishing up for the day’s awards including the 5 picks for Super Chevy Editor’s Choice awards. And we didn’t pick just show cars, but instead we chose rides we wanted to take home with us, and not on a trailer!

True Street also ran where anyone, especially non-racers, had a change to take home some cash and bragging rights. In TS cars go on a 30-mile drive then come back and, without opening the hood, make three back-to-back runs which are averaged for the various time brackets. It’s fun and a great way to run cars that don’t normally his the drag strip.

So what is the Super Chevy Show? Well, if you’re a Chevy fan it’s an event you don’t want to miss! The next Super Chevy show will take place April 21-22nd at Palm Beach International Raceway in Palm Beach, Florida and as always it will have a car show, drag racing, exhibition cars, and a swap meet. To check out the complete 2017 event schedule, and find out more about what the show is all about, be sure to visit superchevy.com.