The Great Race: Nine days and 2,400 miles makes for a good way to spend time in your Corvette 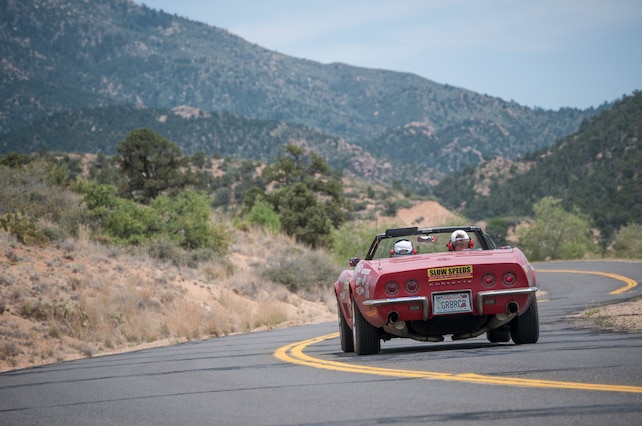 Not all races are about speed; many, in fact, are about precision driving. One example of this is the Silver State Classic Challenge held each year in Nevada. Here, drivers try to negotiate a 90-mile stretch of highway in a very precise timeframe. The Great Race is similar, but the precision driving takes place over the course of a week and traverses a good chunk of the U.S. And while “race” is in the title, it’s really more of a road rally since the posted speed limit is never exceeded.

While some might think this event has been going on for 50 years, it really started back in 1982 with Tom McRae and Norman Miller. You see, McRae and his buddy Curtis Graf signed up to run in the Great American Race from Los Angeles to Indianapolis. The prize was touted as $250,000 and the race was only open to pre-World War II vehicles. But, as it turned out, they were the only entrants and the event was a bust. Miller got together with McRae, bought out the original promoter and The Great Race was born. A group of 69 gearheads ran that first year from California to Indy and each entrant ponied up $5,000 for the chance at the $250,000 prize. The event was a success and over the years the rally kept gaining popularity. It was always kept family oriented and the routes were varied to see all of the scenery this country has to offer. For safety, the major interstates were avoided in lieu of much cooler backroads and byways.

In 2011, under the leadership of Corky Coker (of Coker tires), The Great Race started a new chapter. Many of the rules, and there’s a lot of them, are still around. But today, any car 1972 or older can run the event. While some basic modifications are allowed, this run is geared more towards cars still in their original trim. As for that long list of rules? Well, it covers anything that might help a team get from point A to point B. In short, digital is out and analog is king. No GPS, fancy gizmos, or even items like a tachometer (if you have one it has to be covered up or removed). Even your wristwatch has to be approved. No maps, charts, or “dialing a friend” for help. Just a set of precise driving instructions each day, with up to 250 instructions, to help get you to each checkpoint, precisely, on time. Every second you’re early or late earns you penalty points. In order to adjust for newer cars’ better mechanics, there’s even a small handicapping system scaled to the age of the car, so the older the ride, the better the handicap is. The basic entry fee is $5,000, with most of that going into the prize money. To encourage younger teams there’s also an X-Cup division for those between 21 and 25 years old. It’s only $1,500 to run and its main goal is to bring the next generation into the sport. There are also classes for rookies, experts, and those that have won the event before. This way everyone has a chance at a chunk of the $150,000 purse.

For 2015, the race started in Kirkwood, Missouri, and finished up at the pier in Santa Monica, California. Making it extra cool was that the 130 entrants ran the historic Route 66. The oldest car was 1915 Hudson 6-40 while the newest was a 1972 Nissan Skyline from Kanagawa, Japan. The 130 cars included six intrepid Corvettes as well, which, given the huge variety of cars in the event, was surprising. But hey, Corvette guys love to drive, so we shouldn’t have been shocked that they would be down for a nine-day, 2,400-mile cruise. All six finished the race, which also shouldn’t surprise anyone. Oh, and if this sounds like your idea of a good time you need to mark your calendar for 2017, since the 2016 event is already sold out.

When The Great Race rolls into town it’s a pretty big deal and the drivers and cars get the celebrity treatment. Each segment is kept reasonable so that participants can enjoy the drive and stopping points. However, trying to run a 2,400-mile rally down to the second is mentally exhausting. This makes the small parties at the end of each day even more valuable to the drivers and navigators.

When you’re driving across country you’re going to hit all sorts of weather. Gene and Becky White, out of Baldwin City, Kansas, ran their 1965 coupe in the Sportsman division. They finished a very strong 17th overall and 7th in their division.

The only C3 in the race was this 1968, 427 big-block-powered Stingray. The Californian team of Gary Phillips and Steven Meeker ran in the Sportsman Division where they finished 52nd overall and 25th in their division. Best of all, they had a blast doing it!

The oldest Corvette of the six was this 1959 beauty. Driven by Ron Beauchamp, of Iron River, Michigan, and Jacques Beauchamp, of Savannah, Georgia, they finished 21st in the Rookie Division and 77th overall.

Hey, we’re all used to driving with jackasses on the road, but when cruising Route 66 it can become much more literal. Side pipes, knock-off wheels, and a big-block under the hood made this green 1965 drop-top one of our favorites. It was wheeled by Forrest and Kathryn Griggs, of Dayton, Nevada, and the couple managed to finish 28th in the Rookie Division and 87th overall.

The strongest finishing Corvette was this 1956 convertible piloted by James Goode of Jefferson City, Missouri, and Louis Goode of Dallas, Texas. The pair worked the stopwatch hard and were rewarded with a 13th place overall finish. Their 3rd place finish in the Sportsman Division was good enough to put $4,000 in their collective pockets.

The finish on the Santa Monica, California, pier was packed with racers, their families, and fans enjoying the Southern California weather.