Newsletter
Sign Up today for our FREE Newsletter and get the latest articles and news delivered right to your inbox.
Home
Camaro Performers
Events

We Head To Michigan Where The Camaros Roam Free And Wild. 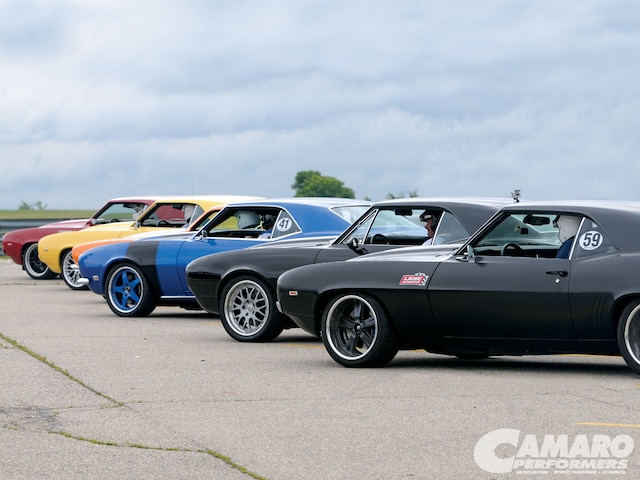 There was a time when event coverage consisted of shooting neatly arranged cars polished to perfection. Sometimes they would be posed on grass, sometimes on asphalt and, while they were fun to check out, there was just something missing. We guess it's a lot like visiting a museum where all the animals are stuffed and in static poses versus a wild animal park where they are doing what animals do, mainly moving about. Both are cool, but one just adds a bit more excitement to the mix. After all, what's more exciting, visiting the NHRA museum or sitting trackside at the Winternationals?

Over the last few years, several events have evolved to combine different driving competitions, but in the last year the number of these events has exploded to the point where there's far more than we have time to attend. Even traditional car shows like the Goodguys and Super Chevy shows have added autocross areas. It's a trend we fully support.

The Motor State Challenge held its inaugural event last year and, unlike many of the other events, it offered a road course segment at GingerMan raceway in addition to the more common autocross competition. This combination is nirvana to those of us who love flogging our cars. Now some might call this breed of gearhead terms like "parking lot drifter freaks" or act like their desire to actually push these cars is somehow antithetic to the car hobby. But the truth is that hot-rodding has always been about driving cars hard, both in latitudinal and longitudinal directions. We still dig a good show and shine, but much like the museum versus the zoo, we prefer to see our animals out and about acting wild.

The Motor State Challenge (MSC) is a three-day event. On Friday there's a chance to hang out and check out all the cars at Motor State Distributing's headquarters in Watervliet, Michigan. There was a tour of the facilities, and because this is about street cars and not race cars, there's a cruise followed by a BBQ. This year the organizers arranged for a police escort and, we have to say, having cops around to block intersections so we can run red lights is the only way to travel.

Saturday was set for some time at GingerMan raceway. This is the perfect track for this type of event since it offers plenty of run-off room, is easy enough for novice drivers, and challenging for the more experienced lot. The rules were simple. All the cars had to run tires with a treadwear rating of 200 or greater. Entrants could run stickier tires, but they wouldn't be counted in the official times. The first sessions were more like qualifying laps, with the top 16 moving to the afternoon shootout. At that time all previous lap times were erased and the cars were again sent out in groups, spaced apart to lessen the chance of passing being required. If a car did catch another, then passing was only allowed on the main straights. After all, it's all about safety, and the SCCA crew running the event takes this very seriously.

On Sunday the MSC moved to a local college parking lot for some autocross action. Now, some might scoff that dodging little orange cones isn't on the same level as running a road course, but it does require a different skill set and puts different demands on a car. Like GingerMan Raceway, this was also set up and ran by the local SCCA chapter, and the course was challenging and, most importantly, fun.

Overall the event was much like any traditional car show. People made new friends, checked out cool cars and engaged in the lying game officially known as bench racing. The main difference here is that the cars were much dirtier than they were when they arrived, the entrants were a bit more tired, and everyone's smiles seemed a bit more earned.