Newsletter
Sign Up today for our FREE Newsletter and get the latest articles and news delivered right to your inbox.
Home
Camaro Performers
Events 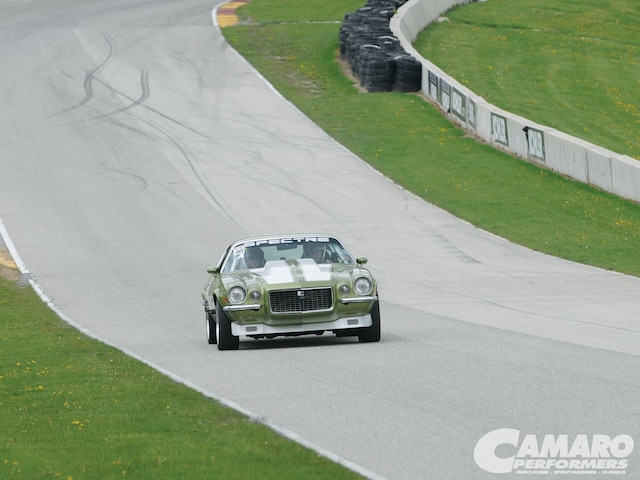 Searching for the ultimate street car takes quite a bit of work, but if that work means hitting numerous events where enthusiasts of American muscle gather to push their cars to the limit, then we'll work overtime just to be part of it.

Now, we get that the term street car might be somewhat vague to many people, but in the context of what's been happening lately, let's just say it's simply taking muscle cars and street machines off the trailer and dumping them onto their intended environment to expose a car's true identity. No longer can a beautifully executed build hide behind layers of meticulously applied clearcoat and multistages of glossy-colored concoctions. And from here on out, all those "nifty" aftermarket performance parts will need to get pushed to the limits of their ability-as they should. So unless your little piece of American heritage is slumbering on the bank of your favorite fishing hole, keep the canvas-backed chair in the shed. Today's breed of street-driven muscle cars mean business, and driving these cars has never been so much fun. The bottom line here: Business is good!

With the growing number of guys giving their hot rods an exercise in asphalt agility, the folks at Optima Batteries recognized the need for an arena in which to hold a legitimate competition to showcase the aftermarket parts that have found their way on some of the baddest muscle cars in the country. So in late 2008, The Optima Ultimate Street Car Challenge was born-an invitational event designed to find out who owns and operates the ultimate street car. The competition took place on a road course and autocross, and points were also awarded on build style, design, and execution. The success of the event caused auto-related message boards across the Internet to buzz with excitement. And by its second year, there was an hour-long television show dedicated to the event. Almost instantly, under the guidance of Optima and with the help of companies like Detroit Speed, Baer Brakes, BFGoodrich, Spectre Performance, and many others, existing venues opened their doors to muscle car enthusiasts who wanted the chance to burn up corners instead of race in the usual straight line to which they'd been accustomed. Most were completely caught off guard and totally surprised at just how much fun this kind of racing actually is.

Flash-forward to 2010 and we now have Optima Batteries partnering with various aftermarket companies to create a series of street car events where the winner, as well as a participant who best represents the spirit of the competition, gets a special invitation to the Ultimate Street Car Invitational at Spring Mountain Motorsports Ranch in Pahrump, Nevada, the Saturday following the SEMA show held in Las Vegas.

The inaugural Optima Batteries Street Car Faceoff was held at the historic Road America racetrack in Elkhart Lake, Wisconsin, on May 1 and 2 as the kickoff for the nationwide search for the 2010 Ultimate Street Car. Presented by Baer Brake Systems and Detroit Speed, the event included the BFGoodrich Hot Lap Challenge, the Detroit Speed Speed Attack Autocross, the Baer Brakes Speed-Stop Challenge, and a style and design competition sponsored by The Roadster Shop. The Spectre Top Speed Award was given to the competitor with the highest speed as measured on a specific location on the Road America racetrack.

The weekend's activities started off with an open house at The Roadster Shop in Mundelein, Illinois, on Friday, April 30. On Saturday, May 1, the Road Rally, or cruise portion of the event sponsored by Vintage Air kicked off at Andrew Chevrolet in Milwaukee, where the participants were given a map consisting of detailed directions of the cruise. Along the way to Road America, D&Z Customs and West Bend Dyno sponsored a lunch stop just outside of Road America, where the remainder of the event would take place.

The competition took place on Sunday, and the participants were split into three groups where the speed-stop challenge, autocross, and road course portions of the event were heldsimultaneously. This ensured the competitors would have plenty of time to complete the required three laps of all three exercises. After the mandatory laps were completed, the competitors were allowed to better their times in any one of the events where they felt they could improve their times.

The idea of the speed-stop challenge is to get your car from point A to point B (at this event the distance was 1,000 feet) in the quickest amount of time; easier said than done. The catch here is that your car must come to a complete stop inside a scant 20-foot-long stop box. If you come to a stop in front of or behind the box, your run would be thrown out. In essence, it's a drag race where deceleration is just as important as acceleration. To be successful here, a car needs three things: a good amount of horsepower, great brakes, and a driver with a keen sense of their car's stopping ability. This is fun stuff.

The autocross took place on what could be described as a mini road course. Unlike a contemporary autocross where cones and chalk lines determine the turns and straights, this was on an actual 1.1-mile karting track complete with permanent apexes and elevation changes; it's one of the coolest autocrosses we've been on.

The road course aspect of the event took place on the famed Road America racetrack. For the purposes of this event, and to keep speeds in check, the 2.1-mile "short course" was utilized instead of the 4-mile big track. It's important to remember that most of the competitors here are amateur drivers with an appetite for nothing more than having a fun day of getting some track time on a legendary course. With that said, cars were still reaching speeds of over 100 mph. If that's not an exciting way to spend a Sunday afternoon, we don't know what is.

What makes events like this so cool is the group of guys and girls who are out to have a great time at the track and enjoy mixing it up with others who are out to get that all-important invitation to the final event of the year: the Optima Batteries Ultimate Street Car Challenge.

Whatever you want to call them: street cars, g-Machines, or Pro Touring, one thing is for sure: We are witnessing the beginning of something very special. And you don't need to have a trailer or a $100,000 ride to compete at any of these events; you just need to be willing to leave your aluminum chair at home.