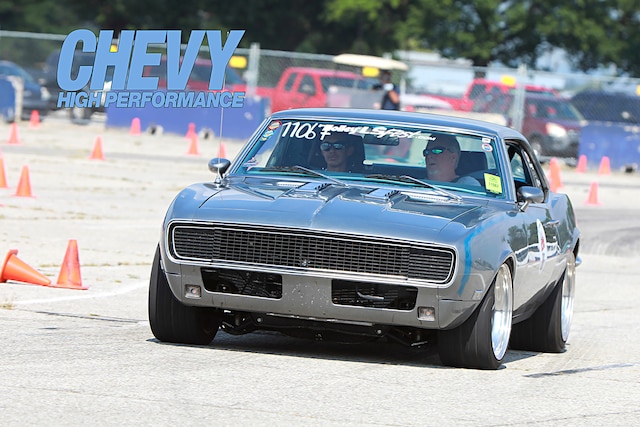 In 2016, the National Street Rod Association went against the normal car show tactics and took a chance on introducing Streetkhana, more commonly known as autocross, to their largest show of the year: the Street Rod Nationals. It was such a huge hit for those looking to do more than pup open an E-Z-Up and fold out camping chair for the long weekend, that the NSRA decided to make the Streetkhana a regular attraction.

Those flogging their g-Machines at the 50th Annual event the weekend of August 1st through August 4th, consisted of drivers who are regulars on the autocross scene as well as first-timers who just had to experience it for themselves. Needless to say, the folks taking their cars out for the first time, ended right back in line for another crack at turning in a better time than their prior lap. If you've not done autocross, be warned, it's truly addicting. And who doesn't love the sound of a V-8 running in the high-rpm range along with the tires squealing in protest coming into every corner? If you are reading this, there is a good chance you do. And if you do this autocross thing correctly, you'll end up with a lot less rubber on your tires than when the weekend began.

The NSRA dedicated an area for the course to be set up on the north-east side of the fairgrounds, which is laid out, managed, and timed by The Autocross Guys (autocrossguys.com). Founders Bill Howell and Brian Finch have been promoting and setting up autocross events for more than a decade and pride themselves on being able to set up safe and fun courses all over the country.

There is no cost to participate in the action as it's included in the price of admission; all that needs to be done is to have your car pass a simple safety inspection. The course is laid out as such that speeds are kept fairly low (it feels much faster than it is, though), so no helmets are required. Ride-a-longs are offered by the few professional drivers and encouraged to anyone willing to sign a waiver to jump on in. We couldn't help but notice how every passenger that experienced a ride exited the car with a huge smile and a "that was awesome!"

Doing the NSRA Streetkhana is an absolute blast as passenger or driver - an absolute "A-ticket ride."

Enjoy this photo gallery of our favorite Chevys from the autocross, and a few more show images the 50th Annual NSRA Street Rod Nationals.