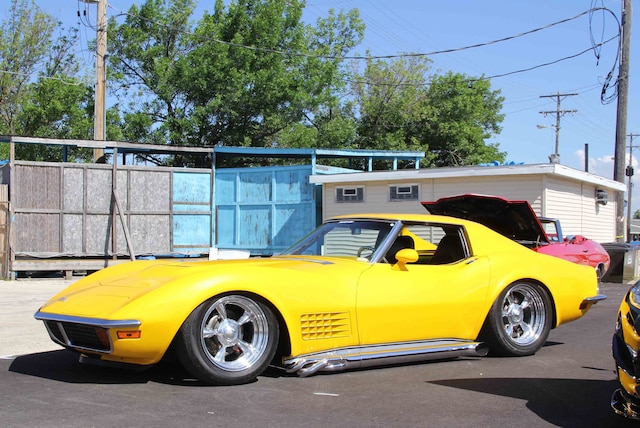 Undiscovered Builders is Sponsored by Amsoil

For the 2016 Summernationals Car Craft has again called out for undiscovered builders to step up and be counted. We're giving them some love to showcase their builds and to spotlight their unique talents for a boost to launch them toward their dream of building muscle cars for a living. Yes, we know that's a crazy, but not unobtainable, goal for all of these builders. Or maybe it's not. Here's one of the five we are featuring:

When Steve went looking for a project to cut his teeth on after finishing high school, he needed to look no further than his garage. His dad Dave bought a 1972 Corvette sales demo in 1973, and had thrashed and bashed it, leaving it to collect dirt, umbrellas, and assorted garage stuff for years. Steve picked at it for a few years, before diving head first into a complete tear down and restoration starting in 2008. Four years later it looked like you see it now. Everything that could be rebuilt or replaced was. Steve stripped it down to a bare shell and frame, then slowly massaged everything back together. All suspension components were massaged beyond just removing and replacing. Things like the stock brake calipers were ground and smoothed up before being finished and attached. A full air ride system was fabb'd by Steve including creating the cups, and hard lines, while hiding the tanks regulators in the rear. Aftermarket cross-drilled discs complete the brakes.

The only part of the small block that remains from the original is the block—everything else was replaced with aftermarket parts like the 202 heads, titanium valves, rods and pistons—all performed by Fred Wailey in Huron Township, Michigan. Unlimited Transmissions in Belleville, Michigan, built a 700R4 automatic, even though there's what looks like a 4-speed stick in the custom made console. The wrap and dash pad were all created in fiberglass and finished by Steve, then he mixed the custom yellow base with gold pearl overlay before Scott Tangin shot the bright yellow.

Things like the headlights and wiper door were converted to electric to eliminate the vacuum lines and perform better. Chris Pisticalli for Pete's Upholstery in Taylor, Michigan, designed the interior and C5 Corvette power seats created in black leather. 17-inch Colorado Custom wheels shine at the corners. Steve and dad Dave have put 5000 miles on the rejuvenated Vette since completion in 2012.

Steve is ready to start building cars soon, and already has a plan. Working at Roush Industries in the Ford Development section of the company, you'd think he would find it exciting and fun, which he does. But he is ready to build cars for customers, and is already looking for a proper building outside of Detroit, so this is one Undiscovered Builder that may not be undiscovered for long.