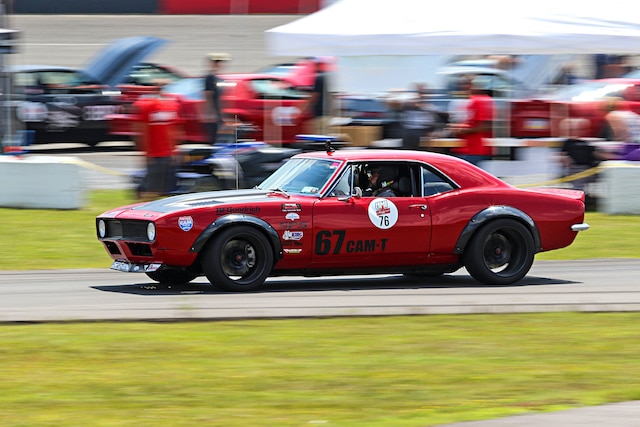 The 2019 UMI Autocross Challenge by UMI Performance was this past weekend and what an event it was. Located at UMI Motorsports Park in Clearfield, Pennsylvania, this exciting driving event hosted over 90 competitors that completed well over 1,200 runs. Needless to say, everyone got their quota of runs in for the weekend.

This two-day event took place on Friday and Saturday, with a kick-off party starting on Thursday afternoon. From sun up to sun down the competition took place on the UMI 5/8-mile oval that has been converted into an autocross facility that allows for numerous course configurations. This year the layout was different and more challenging than last year's course, and because of its size, two to three cars were able to compete on the track simultaneously. This ensured the competitors got tons of laps.

The intricate course consisted a slalom through turns four and three going backwards on the track until turning onto the infield around the middle of the backstretch completing a series of twists and turns before heading back out onto the oval. There was a good mix of turns, slaloms, high-speed jaunts, and even a Chicago box for good measure.

Friday night, UMI hosted an open house at their production facility where participants were able to roam and see everything they manufacture in-house. Saturday after the competition and awards ceremony had concluded many of the competitors met up to continue bench racing and sharing stories from earlier in the day. Much of the discussion was about the King of the Mountain. This is an exclusive event where the top competitors for the weekend got an invite to compete for a $10,000 check. King of the Mountain will be held at UMI Motorsports Park August 23rd and 24th.

Another topic of discussion was regarding the money raised for charity. There was a bake sale along with event host, Chad Reynolds, on the mic doing his rap to help raise money for the Emily Whitehead Foundation and ALS Association. Kudos go out to this group, which raised $7,000.

It was an awesome way to top off an already great weekend of racing. We are looking forward to this event for next year, and of course, next month's King of the Mountain.

We hope you enjoy this photo gallery from the 2019 UMI Autocross Challenge.