The NCM celebrates Corvettes; past, present and future at the 2019 Michelin Bash 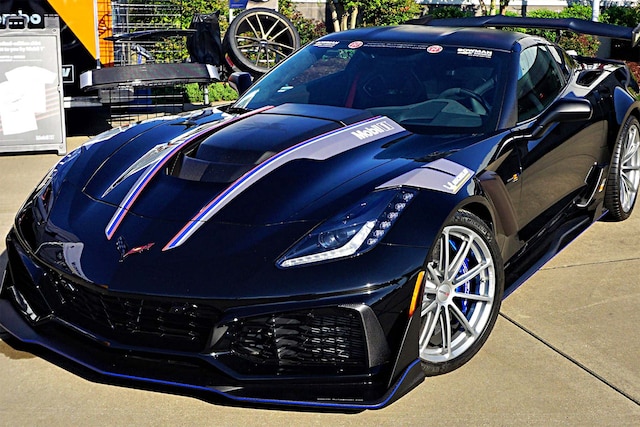 Each April, Corvette fans flock to the Michelin NCM Bash to learn the latest information about their favorite sports car. The Bash is a unique event for these enthusiasts because the Corvette Team always discusses current and future products. Many upcoming models have been unveiled at these events, including the C5/C6 Z06, the 2009/2017 Grand Sport and the 2015 Z06. This advance sneak peek at new models has become a time honored tradition for this event. The 2019 attendees were filled with anticipation hoping to see the 2020 mid-engine Corvette.

The buzz throughout the weekend was all about the closely guarded mid-engine C8. Would Bash attendees get an up-close look or would they go away disappointed? On Friday the word began circulating that a C8 mid-engine was parked in front of the Bowling Green Assembly Plant. It was there to bring attention to a GM media event hosted by CEO Ms. Mary Barra. For a $500 per person donation to the museum, people could take a tour of the plant and listen to her speech. It was later announced that a second shift and 400 employees would join the Corvette Assembly Plant. Bash fans now knew that a C8 prototype was close by the NCM. Fingers were crossed they would get a chance to see it. As in previous years, GM engineers, designers and plant assembly staff were on hand to answer (some) questions. This included Tadge Juechter (Corvette Chief Engineer), Harlan Charles (Chevrolet Corvette Product Marketing Manager), Kirk Bennion (Exterior Design Manager for Corvette) and Kai Spande (Bowling Green Assembly Plant Manager).

Each speaker wore shirts covered in black and white camouflage with a prominent C8 emblem on the front. This is the same pattern that has been seen on numerous spy photos of the mid-engine Corvette. All three speakers were very skilled in deferring C8 questions by responding, "wait until 7-18-19" and all your questions will be answered.

A stunning new exhibit awaited visitors as they entered the museum. Legendary GM designer Harley Earl was responsible for approving the development of the first Corvette. This unique display of a 1953 Corvette shows half of the body on the right and an exposed chassis on the left side of the car. It was mounted on the third 1953 Corvette chassis, VIN#003. It was built by Corvette Repair (www.corvetterepair.com) in Valley Stream, New York, for the Ed Foss collection.

The Foss family recently donated this marvelous, driveable Corvette to the NCM. Other Bash displays included a tribute to NASA Astronauts and the Corvettes they drove. The racing display featured some new additions, including the Pirate Racing ZR-1. The Performance Build Center team assembled and disassembled an LT4 engine from top to bottom. Other activities included a celebrity car show and classroom sessions by Corvette Certified Technician Paul Koerner. Enthusiasts also enjoyed numerous guided road tours, a Ladies Oasis and an expanded Garage Party with women from the GM Corvette Team. The NCM Motorsports Park had many driving activities during the Bash. Many owners took advantage by wringing their Corvettes out during the weekend at this fabulous facility. Expert instructors were on hand to provide owners feedback on how to safely extract performance from their Corvettes.

The big surprise happened near the end of the weekend when crowds began gathering around the museum entrance. Word quickly spread that a prototype C8 would make a drive by. In the early afternoon, a camouflaged C8 rumbled through the NCM entrance and slowly drove by the crowd of enthusiasts. As it left the museum the driver gave it a quick burst of acceleration. You could hear the rapid shifting of the automatic transmission and in a moment it was gone. It was a great way to end the 2019 Michelin NCM Bash. Stay up to date on C8 news at www.chevrolet.com/upcoming-vehicles/next-generation-corvette or www.chevrolet.com. For information on upcoming museum events and news go to www.corvettemuseum.org. Vette

Michelin is the title sponsor of the NCM Bash. Michelin has close ties with Jeff Nowicki, owner of Nowicki Autosport (www.nowickiautosport.com). Jeff showcased his beautiful ZR1 at the Michelin display area.

Later in the day, Michelin made room to add a second Nowicki Autosport C7 Corvette to their display.

The Nowicki Autosport ZR1 is fitted with these attractive Forgeline wheels that are a perfect fit for the original equipment Michelin tires.

Corvette Racing has won three championships in a row (2016-'18). To celebrate this achievement, each factory driver designed their own unique Corvette. They are now part of the special order Grand Sport C7R Driver Series for 2019. (Photo: GM)

Each Grand Sport comes with this Corvette Racing Jake label on the lower door.

Each Driver Series Edition is fitted with this interior plaque with the driver's name and the VIN of the car.

This aerodynamic wicker bill is added to the rear spoiler of each Grand Sport C7R Driver Series Edition.

Corvette Repair, located in Valley Stream, New York, built this driveable, unique 1953 Corvette. It was assembled on an original VIN 003 chassis. The Foss family recently donated this Corvette to the NCM.

The last C7 will be auctioned off on June 28 to benefit the Stephen Siller Foundation. Mr. Siller was a New York City firefighter who died in the terrorist attack. The actual car will be presented when production ends. (Photo: GM)

This 1965 Rally Red convertible belonged to Betty Skelton. Ms. Skelton set many land and aviation speed records and this Corvette was one of her personal cars. It is on loan from Matt Barczak from Homer, Pennsylvania.

XP-897 was a 1973 two-rotor mid-engine experimental Corvette. GM displayed it at various car shows. The two-rotor engine was unsuccessful and the program was cancelled. This car was stored in Britain and recently returned to the U.S.

This 1995 ZR-1 was one of the last to be professionally road raced. It was owned by Pirate Racing and driven by Bill Cooper. It was last raced in 2000 and was donated by Jim Van Dorn in Bowling Green, Kentucky.

Mary and Tadge Juechter were Bash celebrity judges who selected a Corvette that was significant to them. The selected owner was awarded with a certificate and a plaque signed by them.

Each selected owner was presented with their Celebrity Choice plaque and certificate at an award ceremony in front of the NCM.

On the last day of the event, the 2020 C8 mid-engine prototype made a slow lap around the NCM. The Bash tradition of previewing next year's model at the Michelin NCM Bash is intact.