Bigger and better than ever this event shows no signs of slowing down. 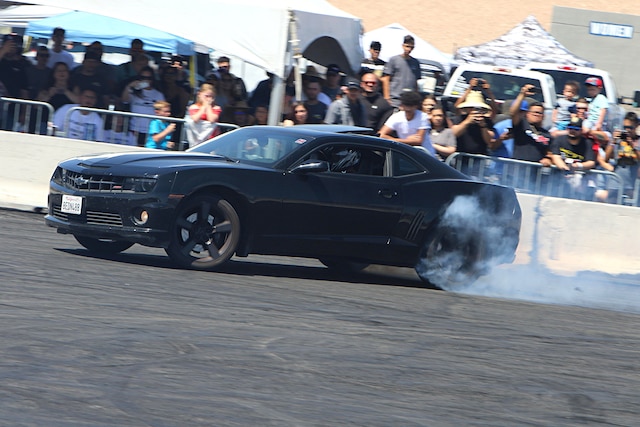 At the Holley LS Fest West for 2019 the attendance, both for cars and people are up over the previous year, which was up from the inaugural event in 2017. It's more proof that arguably the most popular engine in history, GM's iconic LS platform, is more popular than ever. This event celebrates all things LS powered and, just for giggles, adds in all the direct-injected performance of GM's newest line of LT mills.

Now you would expect an event like this to be thick with Chevys, and it was, but it always amazes us to see how many odd cars get LS swaps. A Pacer? Yeap, believe it or not. Volvo wagons, BMWs hell, nothing really surprises us anymore. It's just goes to show that even "meh" cars can be cool when filled with Chevy performance. Well, at least cooler than they were.

Like Friday the action on Saturday included an autocross (actually two of them to handle the increasing demand), road course, drag strip, drifting area, chassis dyno, and even an off road exhibition. If that's not enough there's a car show to check out along with a huge vendor midway that for 2019 is the biggest yet. Sunday kept one of the autocross course areas for fun runs, but the main autocross was converted to the Super Chevy sponsored 3S Challenge. Start, Steer, Stop is what this is all about. Cars launch side-by side, drag race down a straight, make 180-degree U-turns away from each other, maneuver through a small slalom course and then have to stop is a small coned off box as quickly as possible. Fastest time wins and it's harder than you would think.

When the dust settled on Sunday around a 1,000 LS an LT power cars showed up to run in the various events or just show up, which bodes well for Holley's venture out west with this endeavor. LS Fest verteran Rich Willhoff took home the Grand Championship award in his track-ready yellow and black C7 Corvette. He won two of the four categories and just edged out Duke Langley in his '02 'Vette. Of the top 9 cars only one of them wasn't a Corvette. It's hard to beat a raced out modern Corvette, but watching some of the vintage Chevy muscle come close was fun to watch. In the Vintage Class Mike Dusold dominated in his full-tilt twin-turbo powered '67 Camaro where he won every event he was entered into. On the drag strip 2nd place was over a half-second slower! 2nd place when to Nick Relampago in his orange '70 Camaro and 3rd was captured by Greg Thurmond, in his C2 'Vette, who just edged out Robby Unser and Matt Alcala. The common thread was they all had fun running their Chevys. In fact, "fun" would be a great way to describe the whole event, so if you have an LS or LT powered ride, of just love watching them get driven as God intended, make sure you attend next year's event. And if you reside in the eastern side of the Nation be sure to hit up the mega LS Fest Easy event held each September in Bowling Green, KY. More info can be found at www.LSFest.com .