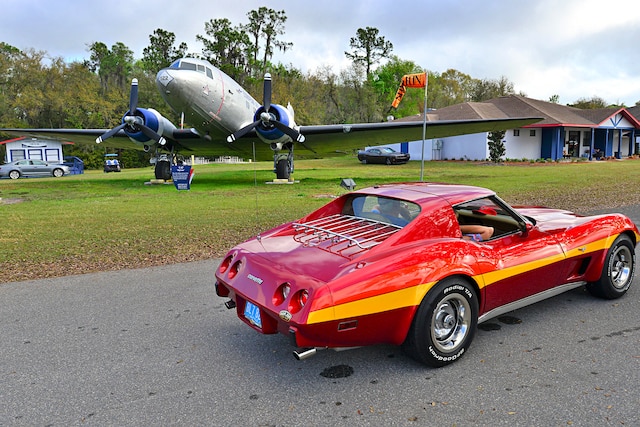 Here is some good news for Corvette fans. If you live in the South or travel there to avoid harsh winters, Carlisle Events added the Winter AutoFest to their schedule. Many Corvette activities are embedded into this show’s schedule. It takes place at the Sun ’n Fun Expo Campus in Lakeland, Florida. It is a perfect place to park your Corvette and enjoy the many activities the show has to offer. This is the same company that presents the highly successful Corvettes at Carlisle show in Pennsylvania. The friendly and well-trained staff works hard to make your visit pleasant and enjoyable. Here is a little background about this unique company and how they expanded to Florida.

It began when Chip Miller and Bill Miller became friends in the early ’70s. The thing about their friendship is they shared the same last name, but were not related. Their business relationship grew over the years because they shared a passion for classic cars. They held their first automotive event at the Carlisle Fairgrounds (Pennsylvania) in 1974, and it was a rousing success. They began adding shows to their schedule and experienced rapid growth.

Chip and Bill created Carlisle Events in order to effectively manage this growth. Their next major decision was to create a permanent home for the company. In 1981, they purchased the 82-acre Carlisle Fairground site and made it the company’s headquarters. This purchase allowed them to make the Fairgrounds a more compatible location for their automotive events. During the ’80s and ’90s, the company continued to expand their schedule.

In 2013, Carlisle Events introduced itself to the Florida market by hosting events in Zephyrhills. Now, with Florida’s rapid growth, the company moved to the larger Sun ’n Fun complex in Lakeland, Florida. This year’s Lakeland Winter AutoFest was held on February 22-24, 2019, and was packed with Corvettes and visitors.

The 41st NCRS Winter Regional Meet was part of the Winter AutoFest activities and certified NCRS judges judged 42 Corvettes. A large hanger was used by the experts the judging. A total of 4,500 points are available for judges to award a Corvette. Ninety-four percent (4,230) of those points are the minimum required to qualify for a Top Flight certificate. Of the 42 Corvettes judged, 17 received Top Flight certificates. For owners who didn’t reach their goal they now have a good guideline on what needs correcting. People attending the show were welcome to visit the NCRS building, and many did. It was a great opportunity to closely inspect these factory-correct, historic Corvettes. In addition to the NCRS event, the show featured a Corvette Fun Field, Corvette Celebrity Judging, vendor displays and seven Corvette related seminars. There was a food midway, automotive flea market and a for sale car corral where buyers could purchase their perfect Corvette. The National Corvette Museum sold $10 raffle tickets for the opportunity to win a 2019 Corvette. The Winter AutoFest will return to Lakeland February 21-23, 2020. To get the latest show information visit www.carlisleevents.com.

Co-founder Chip Miller passed away in 2004. His son Lance Miller became co-owner and works with co-founder/co-owner Bill Miller Jr. to manage the company. Lance wants to continue his dad’s “Life is Good” mentality and legacy as the 21st century rolls forward. What started as a pair of automotive flea markets in the mid to late ’70s has spawned specialty show after specialty show. Their 2019 schedule includes 10 automotive events (including one in Lakeland) and four Carlisle Auctions (including one in Lakeland). The company has evolved from “cars in a field” to destination activities for individuals and families from around the world. Annually, more than half a million guests visit shows promoted by Carlisle Events. We encourage you to visit one of their Corvette shows in Pennsylvania or Florida ... you will not be disappointed. Vette

This 1976 Corvette is shown entering the Lakeland Winter AutoFest entrance as it passes by a vintage World War II C-47 cargo plane. The plane serves as a gate guardian for the Sun ’n Fun Expo Campus at the Lakeland airport.

Only 199 Corvettes were ordered in 1963 with the Z06 performance option. This Sebring Silver example owned by Ted Freund is one of them and was awarded Top Flight certification.

The Lakeland Sun ’n Fun airport provides ample parking for the many Corvettes that visited the event this year.

Roger and Connie Lester have traveled the around the U.S. in their 1962 Corvette. The custom trailer provides plenty of extra room for their luggage.

The Lakeland Winter Collector Car Auction was a popular stop for buyers and spectators. Lots of interesting cars and trucks crossed the block throughout the weekend, and many found new homes.

Tom DeBold’s fuel-injected 1960 roadster received a Stock Blue Ribbon after it was entered in the Concours Stock category.

The Corvette vs. Cobra War seminar discussed how each brand battled each other. Two cars were available for inspection. They were the Fabulous Restorations Owens/Corning L88 Corvette replica and Dr. Gingold’s 1965 427-cid Cobra.

The L78 396/425hp big-block in John Landis’ Corvette has been restored to look like it did when it left the St. Louis assembly plant in 1965.

James Henry purchased this one-owner 1967 coupe in 2010. It was damaged in a flood and did not run. James repaired it and has driven it around the country. He was presented with a Sportsman award.

The ’67 Corvette has amassed 245,000 miles since it was built. The unrestored original interior has held up surprisingly well.

The L75 327/300hp engine is backed with a two-speed Powerglide transmission and factory air conditioning. This car is a true survivor.

Bill Miller Jr. (co-founder/co-owner of Carlisle Events) spent much of his time watching over the collector car auction. Bill did an excellent job directing sellers and buyers to the right auction spots.

Mark Wiley drove 450 miles to bring his rare (1 of 4 produced) 1954 to the NCRS Winter Regional Meet for judging. Mark’s beautiful Corvette was awarded Top Flight with “longest driven” noted on his certificate.

This I-6/150hp six-cylinder engine in Mark Wiley’s 1954 Corvette had no oil stains even after being driven 450 miles to the NCRS Winter Regional Meet.

The large food court was a popular place to visit so attendees could buy a cold drink, snack or lunch.

Lance Miller (co-owner Carlisle Events) spent the weekend hosting social media events about the Winter AutoFest. Lance is shown conducting a live podcast to provide up to the minute information for those attending the show.

The Lakeland Winter Collector Car Auction was a popular stop for buyers and spectators. Lots of interesting cars and trucks crossed the block throughout the weekend and many found new homes.

Carl Everett put his big-block 1969 Corvette convertible through the “as manufactured” Performance Verification testing process. His car passed after it did not have a single failure.

Larry Sturm’s Bowling Green-assembled two-tone 1981 Corvette was presented in like-new condition. It was awarded a Top Flight at the NCRS Winter Regional Meet.

Coffman Corvette received a Modified 427 award for this restomod 1965 Corvette convertible. It features many newer parts while retaining the look of a classic 1965 convertible.

The engine in the Coffman Corvette has a vintage-appearing fuel-injection unit that hides a newer technology LS Classics fuel-injection system. It is a very impressive presentation.