A new twist on a long-standing Corvette show 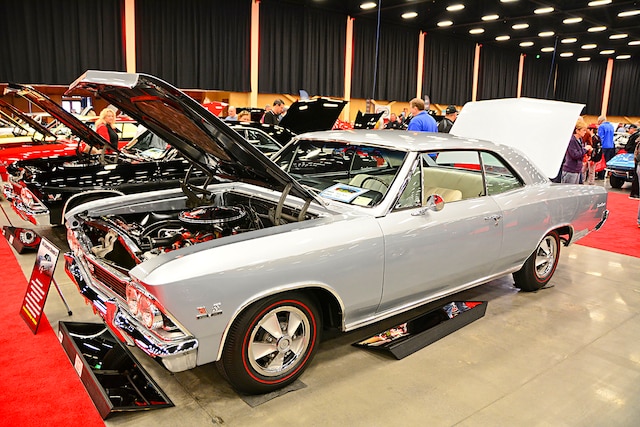 Corvette shows are usually pretty strict about the types of vehicles allowed on the premises. Fiberglass two-seaters are typically the only vehicles on display. However, Byron Cooper and his crew at Cooper Events expanded on the popular Corvette Expo event format by offering a special “Chevelles in the Smokies” section inside the LeConte Center in Pigeon Forge, Tennessee. A show within a show, the Chevelles in the Smokies exhibit featured 18 of the country’s finest Chevelles, including original restorations, custom builds, and a few cars that blur the line between original and custom.

In general, Pigeon Forge, Tennessee, is a car-friendly town, with nearly a dozen giant car events per year. The new LeConte Center offers the perfect venue for an event of this magnitude, thanks to the spacious indoor facility and thousands of parking spaces outside.

Along with the 18-car invitational exhibit, the Corvette Expo featured indoor spaces for other classic Chevys, as well as space in the outdoor portion of the show, which is called the Park N Show. The additions to the event were well received by the Corvette crowd, and it brought in a new group of participants and spectators. Taking top honors in the inaugural Chevelles in the Smokies event was Bob and Judy Mick from Roanoke, Virginia, with their 1967 Chevelle Super Sport. While it was not completely original, this car was beautifully detailed in traditional 1960’s style with a Tri-power-equipped big-block, backed by a Rock Crusher four-speed.

The Chevelles in the Smokies exhibit within the Corvette Expo was an awesome event, so we wanted to show you our favorite photos from the weekend. Enjoy the Chevelles on display, as well as plenty of other vintage muscle on hand to take part in this springtime celebration of all things Chevy. CHP

Big-Block 1966 Chevelle Restomod is the Object of Obsession

Over 50 years after owning an original 1966 Chevelle SS, Terry Kamp has finally fulfilled his obsession to own and build another.

With tons of vintage cues and old-school Mickey Thompson Sportsman rubber, this 1969 Chevelle looks like a build straight out of 1975.

Installing right-sized Wilwood brakes on a 1966 Chevelle with 15-inch wheels and adding a set of vintage styled 17-inch rollers.

Andy Lezotte and Ironworks Speed & Kustom came together to develop one of the sleekest Chevelles we’ve seen in a long time.

Classic Car Studio built a badass Pro Touring 1971 Chevelle with power to spare, which was documented on the hit show Speed is the New Black.

1966-’67 A-body Chevelle trunk floors tend to rust and look like hell. Here’s a step-by-step tech on how to install an AMD trunk floorpan.