500-plus Corvettes of All Generations Converge on Pigeon Forge, Tennessee 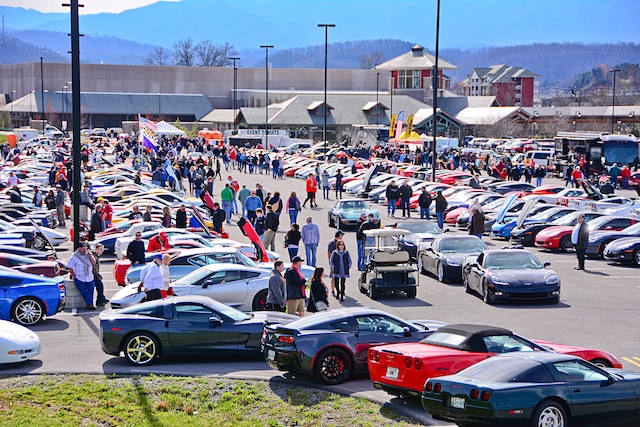 In its 42 years of existence, the Corvette Expo has seen its share of changes, in regard to the venue, the age demographic and the quality of cars in attendance. Byron Cooper and his crew at Cooper Events work tirelessly to improve the event, and a big step involved moving the event to the LeConte Center in Pigeon Forge, Tennessee in 2018. The giant facility offers plenty of room for Corvette-lovers to gather, or so we thought, as the 2019 Corvette Expo exceeded everyone’s expectations. By mid-morning on Saturday, the Corvette “Park N Show” area was filled to capacity, and the indoor portion of the show had been sold out for weeks leading up to the event. The intense growth was a product of the continued improvements, and the sunny weather forecast encouraged folks to get out of the house for one of the first big events of the season.

The Corvette Expo has always featured a great balance of show cars and Corvettes that get driven regularly. Inside the LeConte Center was an awesome selection of show cars, ranging from the earliest of C1’s to beautifully modified C7’s and just about everything in between. Restored original cars are mixed in with modified custom builds, giving every level of enthusiast something to enjoy.

One of the most fun aspects of the Corvette Expo is the Friday afternoon cruise. This year, it kicked off in Pigeon Forge and traversed the newly opened “Missing Link” section of the Foothills Parkway. This twisty section of brand new asphalt offers breathtaking views of the Smoky Mountains and plenty of chances to test the handling capabilities of your Corvette. From there, the cruise made its way over to Highway 129, a famous mountain road known as the Tail of the Dragon. This insane road features 318 curves in only 11 miles as it snakes its way into North Carolina. A total of 252 Corvettes participated in the cruise on Friday.

Another great feature of the event is the wide variety of vendors that display new parts, as well as a sea of original parts in the swap meet, for the Corvette enthusiast who is always chasing correct stampings, matching date codes or simply looking for a bargain. Al Knoch Interiors was performing interior installations all weekend long and the NCRS crew had a special area to judge restored Corvettes and beautifully preserved survivors. Whether you like vintage Vettes or the modern mechanical marvel of a supercharged C7 Z06, there was something for everyone at the Corvette Expo, and we’re certain that next years event will be even bigger and better. Mark your calendars now and join the fun in Pigeon Forge, Tennessee on March 20-21, 2020. Vette

Most of the time, Corvette owners want low-mileage vehicles. This 1967 coupe is just as special, as it features more than 245,000 documented miles. The small block-powered coupe features factory air conditioning and it’s a great example of a seasoned, original Midyear Corvette.

With its wildly exaggerated body lines, Mako Shark Corvettes, it’s hard not to love the styling of Rick Walker’s 1976 ‘Shark, which is one of five “short tail” cars built. John Silva originally built the car in the ‘70s and Rick handled the most recent restoration.

Joe Spano’s 1962 Corvette features subtle body modifications, late model suspension and an LS3 power plant. The beautifully customized car is the handiwork of B Rod or Custom, a shop in Knoxville, Tennessee that specializes in early Corvettes.

The C4 continues to be the most affordable Corvette on the market, and we love seeing them getting the attention they deserve. This one is LT5-powered, and sports a slick red paint job, accentuated by C6 wheels.

A total of 252 Corvettes participated in the Dragon Cruise on Friday afternoon. The Corvette cruise started in Pigeon Forge, and crossed the newly opened “Missing Link” section of the Foothills Parkway before entering the Tail of the Dragon.

Winning the award for “Oldest Corvette” on the Dragon Cruise is this beautifully restored 1960 roadster. It’s one of only 383 Tasco Turquoise examples, yet the Georgia-based Vette is still being driven on a regular basis.

This tastefully modified big-block roadster leads the way through the twists and turns of the Foothills Parkway.

One of the wildest Corvettes inside the LeConte Center is Rod Lyonhurt’s 1973 Stingray, named “Venom”. This customized Vette is over the top, with period correct modifications and a 640 horsepower small block.

Another big attraction at the 2019 Corvette Expo was the C5 Z06 give-away car! Registration was free, and the winner was Kelley McKakin from Georgia.

Love it or hate it, one of the most attention-getting Corvettes on the property was this slammed C7 Z06, wrapped in satin camouflage.

Wearing Burgandy paint, optional wheel covers and Firestone white stripe bias ply tires, Gary Moore’s 1969 Stingray has a distinct look. It is also one of only 102 Corvettes that left the factory in 1969 with an optional Heavy Duty Clutch behind the Tri-Power-equipped big-block.

Another big--2019-CORVETTE-EXPO-PIGEON-FORGE block C3 Vette that caught our attention was in the car corral. This 1968 project car was partially finished, but had lots of potential. With an asking price of $15,000, it was a great deal looking for a new home.

How do you make a C7 Z06 even faster? More air and more fuel, of course. This example features a Procharger and an LME billet intake manifold atop the potent LT-based engine.

Rubber bumper C3’s rarely get the attention they deserve, but this one is looking great in bright red with black accents. The 17-inch Coys five spoke wheels are a nice touch for this Stingray.