Roger Penske is presented with the Spirit of Competition Award

The Simeone Foundation presents their 2018 Spirit of Competition Award 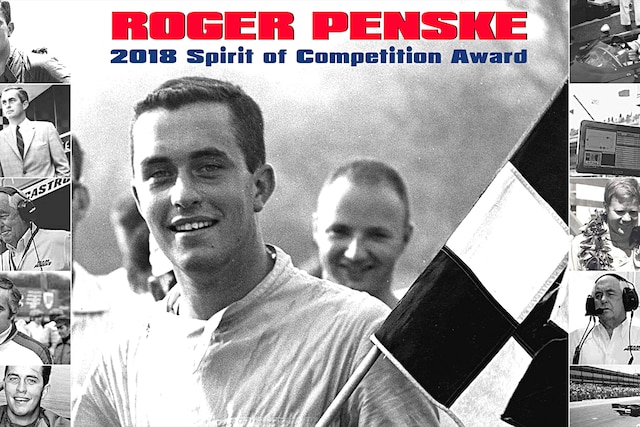 This year’s ceremony was hosted by Amelia Island Concours d’Elegance founder Bill Warner. Bill highlighted Roger’s many accomplishments, including being a championship winning race driver and now a championship winning race team owner for more than five decades. His team has amassed over 500 victories and more than 32 national championships. Penske Racing competes in the IndyCar series, NASCAR Monster Energy Cup Series, NASCAR Xfinity Series and the IMSA WeatherTech SportsCar Championship. In 2015, Penske added the Virgin Australia Supercars Championship after partnering with Dick Johnson Racing. Regardless of the type of racing, the team is renowned for its top-flight equipment, impeccable preparation, buttoned-up appearance and star drivers. His race team calls him the “Captain.” This is because he manages his racing teams with military precision and demands the same from his team members.

The Spirit of Competition banquet was filled with many of Mr. Penske’s friends, drivers and team members. Three of his former race cars he owned were on display and each played a major role in his early racing successes. They were the #002 1963 Corvette Grand Sport roadster (owned by the Simeone Foundation), 1966 L88 Penske Corvette GT Prototype (owned by Corvette Repair, www.corvetterepair.com) and the 1968 Penske Trans Am Camaro (owned by Irwin Kroiz). During the event, Mr. Penske closely inspected each one and it was easy to see by the smile on his face that he enjoyed talking with the owners and examining his former winning race cars.

Mr. Penske began his racing career in 1958 after he purchased a fuel-injected 1957 Corvette roadster at Hauser Chevrolet in Bethlehem, Pennsylvania. Hauser Chevrolet’s owner was Ben Moore who was an amateur road racer. Ben later became a successful co-driver on Penske’s racing team. Roger intended to use his 1957 Corvette exclusively for road racing. His first race was at the Duryea Drive Hill Climb in Pennsylvania. Later that year he raced the Venetian Red and Polo White Corvette at Giants Despair and the Reading, Pennsylvania, racetracks. He earned his SCCA competition driving license driving at the Cumberland, Maryland, racetrack. He was named “North American Driver of the Year” in 1962 that recognized his immense driving abilities.

While he drove different brands of racing cars, Corvettes played a major role in his driving accomplishments. In December 1963, Penske joined the Mecom Racing team and drove a Corvette Grand Sport (#004) to victory at the Nassau Speed Weeks. He also led the first several laps at the 1964 12 Hours of Sebring driving the #005 Corvette Grand Sport. Penske ended his driving career at the Nassau Tourist Trophy Race in December 1964. He was driving his Sebring #005 Grand Sport and retired from racing after winning the main event and beating the dreaded Cobras. With the week of racing still underway Penske sold Grand Sport #005 to his friend and fellow driver George Wintersteen. In 1965, he purchased George McKean Chevrolet and renamed it Roger Penske Chevrolet. Due to his success racing Corvettes, Zora Arkus-Duntov invited him to form a team and race a prototype L88 Corvette at the 1966 24 Hours of Daytona. Zora and his Corvette team had been secretly working on this race engine package for several years. He agreed and the Corvette that was on display at the Spirit of Competition banquet is the same car. It won its class at Daytona and finished 11th overall. This began Mr. Penske’s amazing career as a racing team owner.

Roger Penske oversees the Penske Corporation (www.penske.com) that is a closely held transportation services company. Its businesses include automotive retail, truck leasing, transportation logistics and professional motorsports. Revenues exceed $26 billion and it operates globally in over 3,300 locations and employs over 50,000 people. Excellence is expected, and it’s delivered every day by its seemingly tireless leader, Roger Penske.

Roger Penske received the Simeone Foundation’s 2018 Spirit of Competition Award for being a distinguished motorsports figure. Mr. Penske is one of the most successful car and track owners in the history of motorsports.

Throughout the past five decades, Roger Penske took an active leadership role during races with his team. They call him the “Captain” because of his deep involvement with his team at every race. This management style has won him numerous racing championships.

Mr. Penske was happy to spend time mingling with guests and signing autographs before the award ceremony began.

This was Roger Penske’s first race car; a Venetian Red 1957 Corvette that he purchased from Hauser Chevrolet. He received his SCCA competition driving license driving this Corvette.

Mr. Penske won the SCCA Presidents Cup three times as a driver. He also secured four consecutive SCCA National Championships from 1960 to 1963. He also captured the Sports Illustrated Driver of the Year award in 1961. He retired from racing in 1964 after winning his last race in Nassau in Grand Sport #005.

Mr. Penske purchased Grand Sport #005 from Jim Hall after they both drove it at the 1964 12 Hours of Sebring. Penske stunned the race crowd by leading the first several laps in front of the factory prototype Ferraris in this Corvette.

Zora Arkus-Duntov converted Grand Sports 001 and 002 into roadsters to race at Daytona and Le Mans. GM stopped Zora from doing this, so he sold both to Roger Penske. Penske raced #001 at Sebring in 1966 and sold #002 to George Wintersteen. Fitted with a prototype L88, Wintersteen drove this car in the United States Road Race of Champions (USRRC) for one year and sold it to John Thorne for $6,700. The Simeone Foundation purchased it in 2010 for a reported $4.5 million, where it remains today.

Roger Penske’s first race car that he competed with as a new team manager was this Rally Red 427ci 1966 Corvette coupe. It was fitted with a prototype L88 engine and finished 11th overall and First in GT at the 1966 24 Hours of Daytona.

NCM Hall of Fame inductee Gib Hufstader was a Corvette Release Engineer for Zora Arkus-Duntov. Gib joined the Penske crew for Daytona and Sebring to provide technical assistance for the prototype engine during the races. He was reunited with Roger Penske at the award ceremony.

George Wintersteen joined Roger Penske’s new race team in 1966 as one of the three drivers at Daytona and Sebring. He purchased and raced Grand Sports #002 and #005 from Roger Penske.

In spite of a heavy front end crash at Daytona that removed the Corvette’s nose, the L88 won the GT class at the 24-hour race. It was repaired in time for Sebring and repainted Sunoco Blue and finished First in GT. Corvette Repair completely restored Penske’s first race car and displayed it at the award banquet.

The prototype L88 engine was prepared by Traco Engineering in Culver City, California. The new engine provided trouble-free performance at both the Daytona and Sebring races in 1966.

The author took this photo of the prototype L88 on the grid prior to the start of the 1966 12 Hours of Sebring race. Sunoco asked Penske to cover up his dealership name that was painted on the front fender.

By 1968, Sun Oil Company was Penske’s primary sponsor. In addition, he had a strong relationship with engineers deep within GM that provided invaluable technical assistance preparing his race cars. This 1968 Trans-Am Camaro is owned by collector Irwin Kroiz. It was restored by Corvette Repair to the way it appeared at the 1968 Sebring 12 Hour race. It finished Fourth overall behind its Third place #15 team Camaro.

The cowl-inducted, Traco-built, twin four-barrel carburetor, 302ci engine produced 420 horsepower for the Sebring race. It ran for 12 hours with no mechanical issues. It was an amazing performance.

Roger Penske (left) and Camaro owner Irwin Kroiz stand next to the Trans-Am Camaro that finished Fourth overall at the 1968 12 Hours of Sebring.

Irwin Kroiz presented Mr. Penske with this framed photo collage filled with historic photos of his Trans-Am Camaro when it was raced. Dr. Fred Simeone (left) and Kevin Mackay attended the presentation.