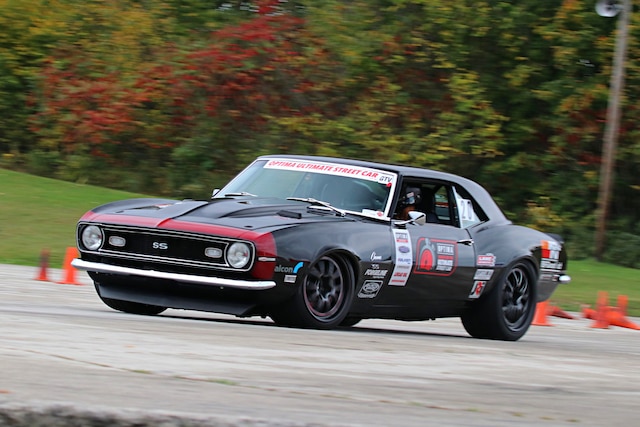 Optima’s 2018 Search for the Ultimate Street Car series begins March 17 at Las Vegas Motor Speedway. Now that we’re less than a month out and five of the seven events have already sold out for competitors (spectators are always welcome), we thought it was a good time to preview the upcoming season. While there have been a few changes to the rules in the series for 2018, the most significant is the expansion of vehicles that can compete in the GTC class to include ones with forced-induction engines and the elimination of some tire models. The consistency throughout the rest of the rules and the speed at which so many of the events have sold out suggest the series has really dialed in a formula that appeals to a large group of competitors and offers tight and exciting competition at individual events, as well as the season-long points chase.

The few remaining spots for competitors are at the NOLA Motorsports Park and Auto Club Speedway events, and the full fields help give us a good idea of who the top contenders might be for the upcoming season. While there are seven total events, a competitor’s season-long point total is based on their best three performances. Class winners at each event earn invitations to display their vehicles at the 2018 SEMA Show and compete in the Optima Ultimate Street Car Invitational (OUSCI), but competitors can also earn their way to Vegas based on their season-long point totals.

Larry Woo’s ’68 Camaro was already one of the very best all-around examples in the world. However, he’s leaving nothing to chance for 2018 and has sent his first-gen down to DuSold Designs for a fresh repaint in Aston Martin Storm Black.

This is a series where competitors do battle for pride more than prize money, but with TV coverage at every event, sponsorships abound. Efrain Diaz picked up a sponsorship for his ’69 Camaro from TCI Engineering over the winter, resulting in a new front subframe and rear torque arm on a custom Currie 9-inch rearend.

The top-three non-qualifiers in each class can earn invitations to the SEMA show at the end of the season, as well as the next 10 non-qualifiers regardless of class, so there are lots of point battles going on throughout the field all season long. Our look at the 2018 season will begin with the iconic GTV class, for vehicles built before 1990 that weigh at least 3,200 pounds.

John Lazorack III’s LS3-powered ’88 Chrysler Conquest won a very close points battle in 2017, narrowly beating Larry Woo’s ’68 Camaro and Brian Hobaugh’s ’73 Camaro for the championship at the final regular season event. However, Lazorack isn’t planning on defending his title, only looking to run at the Auto Club Speedway event this season. That opens the door for a new GTV champion in 2018.

Woo’s Camaro has to be considered a front-runner for the GTV class championship. Woo, who came up 13 points short in 2017, was also the runner-up in the 2015 season and hasn’t finished outside the top three in the last three seasons. Larry knows better than anyone else that the road to the championship won’t be easy, even with Hobaugh moving to the Recaro GTS class in 2018. The first-gen Camaros of Chad Ryker and Efrain Diaz have been fixtures in the top 10 in the GTV class over the last three seasons, with both finishing inside the top five in each of the last two seasons. They will look to close the gap on Woo’s Camaro in 2018, but will have plenty of company.

Many other competitors have switched cars and classes over the years, but the balance of power among the classes seems relatively constant. Two competitors looking to make an immediate impact on the 2018 GTV points chase are Danny King and Randy Johnson. King has finished inside the top 10 in the Recaro GTS class in each of the past two seasons, but he’s parking his Porsche in favor of his ’69 Camaro, which has undergone a massive transformation over the past few years. Johnson’s C5 Corvette finished sixth at the 2017 OUSCI, but he is parking that car so he can run a freshly built ’69 Mercury Cyclone powered by a Lingenfelter LS7.

Jake Rozelle’s 2003 Z06 received what he describes as a “pretty aggressive spring change” over the offseason, as well as a new front splitter and undertray to reduce drag and increase downforce, which comes in handy at tracks like Road America where a lot of time is spent at triple-digit speeds.

Fans of Danny Popp who have been frustrated by his infrequent appearances during the regular season will have more opportunities to see his C5 in action, as Popp is slated to run at NOLA Motorsports Park, NCM Motorsports Park, Barber Motorsports Park, and Road America. His son Nathan will be joining him in a Camaro at three of those four events.

The Recaro GTS class, for 1990 and newer two-seat coupes and all-wheel-drive vehicles over 3,200 pounds, is where 2016 GTV class champion Jake Rozelle now runs in his ’03 Corvette. Austin Barnes’ Viper edged out Rozelle’s Z06 by just 12 points for the 2017 championship, but Rozelle will be on the warpath in 2018. The two will square off on at least three occasions in 2018, starting at the season-opener in Las Vegas, followed by the stops at PPIR and Auto Club Speedway. Joining that fray will be other top GTS competitors Jordan Priestley, Glen Barnhouse, and Carrie Willhoff, who will all be running their Corvettes at those events. The C5 of 2013 OUSCI champ Brian Hobaugh is also scheduled to run at both Vegas and Fontana but does not have a third event on his calendar at this point. The dark-horse contender in the Recaro GTS class could end up being the ’16 Corvette of Eric Fleming. Eric finished sixth in the 2017 points chase and is set to compete in four different events in 2018, but all four happen to be events Barnes, Rozelle, Priestley, Willhoff, and Hobaugh won’t be running. That could offer several opportunities to capture higher point totals at those events, although Fleming still has to compete for points with heavy-hitters in other classes at those events.

Most of those heavy hitters will reside in the Holley EFI GTL class, which has produced the OUSCI champion in each of the last three seasons. Two of those championships were won by Danny Popp’s ’03 Z06, who will start 2018 without the defending champion’s invitation for the first time in three years. That means Popp’s Corvette will have to earn an invitation at a qualifying event, which shouldn’t be a problem for him, but could create some significant problems for his fellow competitors.

David Carroll is a season veteran in the series, but only has one event in his Ecotec-swapped ’73 Vega. Rule changes for 2018 move him into the GTC class, where he should be very competitive.

If someone wants to get to the top of the Franklin Road Apparel GT class, they’ll have to get past Bryan Johnson’s ’13 Camaro. No one has been able to do it in the last three years. Will 2018 be different?

The Holley EFI GTL class has come down to a three-horse race in each of the past two seasons, with Mike DuSold’s ’67 Camaro and Ken Thwaits’ ’06 Mitsubishi Evo chasing and coming up short in their pursuit of Rich Willhoff’s C6 Corvette. While Popp has used the series stops as a warm-up for his past OUSCI titles, 2018 could be a season where he pursues a regular season title. Ken Thwaits is also expected to field a C5 in competition in addition to his Evo, giving him two shots at the top. Karl Dunn also hopes to get his C5 back on track as he looks to shake off a disappointing 2017 season.

The GTC class was designed to draw in shorter wheelbase (107 inches max) vehicles, like the Sonic and Spark, but didn’t see any Chevy entries in its first year. For year two, forced-induction was allowed and the years of inclusion were expanded on most vehicles. That allowed David Carroll’s LTG-swapped 1973 Vega to move into the class and compete against Miatas and S2000s instead of squaring off against lightweight Corvettes and all-wheel-drive Evos in the Holley EFI GTL class. However, Carroll is only signed up for Vegas and Fontana, so if he wants to contend for the GTC championship, he’ll probably need to get into a third event.

The Franklin Road Apparel GT class has been home to the most dominant competitor in the series: Bryan Johnson and his ’13 Camaro. Johnson has won the class for three years running and hasn’t had a serious challenge since Danny Popp and Ken Thwaits ran their Camaros a few years ago. However, it is one of the largest and most-popular classes in the series and already has more entries than it did in all of last season. The Camaros of John Grow, Eric Sheely, and others will look to topple the giant of the GT class. You can learn more about the series and the 2018 schedule at driveoptima.com.

Chad Ryker will be looking to pull out all the stops in his ’68 Camaro as he pursues his first GTV class championship.

Jordan Priestley put his C7 on a diet over the winter, adding several carbon-fiber pieces from Anderson Composites, as well as some suspension upgrades to help him in his pursuit of a Recaro GTS championship.

Rich Willhoff’s ’06 Z06 has won the Holley EFI GTL class in back-to-back seasons, but a rule change in the offseason will move him and several other competitors to different tires for 2018. He will also be sporting new hoops, as Forgeline came onboard as a sponsor.

The evolution of Mike DuSold’s ’67 Camaro has been constant since he started running in the series at Texas Motor Speedway in 2014. What do you do to improve a car that already has about 1,000 horsepower on tap? Mike tells us his car received heads and cam work, bigger turbos, and much-needed larger calipers over the winter.

Eric Sheely’s ’18 Camaro ZL1 1LE was the top-finishing golden ticket invitee from the 2017 SEMA Show. Can he build on that momentum to take on three-time Franklin Road Apparel GT class champion Bryan Johnson?