SEMA is the last time this Vette will look this new 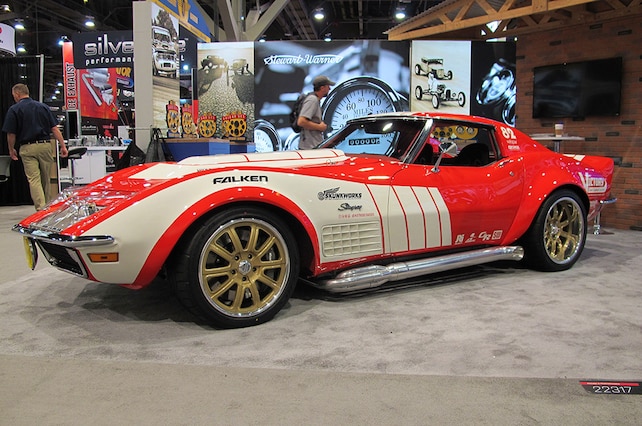 Corvettes are a staple every year at SEMA, but what gets the most love from the aftermarket are typically late model C7s. It’s always nice to see someone breathe new life into something a little older like this 1970 Corvette which was definitely given a new lease on life.

The Vette was built by Kevin Tully, Chad Hill and owner Tim Grant over at Hot Rod Chassis & Cycle to race in Optima’s Ultimate Street Car. Tim plans on racing it in the last Optima event of the season if he is lucky enough to get the golden ticket, but regardless he assured us he will be out there next year to race the whole season.

In case you didn’t notice from the pictures of the car, Tim went with a classic Le Mans look for his 1970 Corvette. The paint scheme is reminiscent of the Corvettes that raced in the Le Mans series back in the late ‘60s and early ‘70s with the aftermarket performance companies whose parts the Vette is comprised of inscribed across its quarters panels and fenders. The headlights have been changed from the original pop-ups and over to the more aerodynamic clear covers.

The LeMans styled exterior might be the first thing to catch your attention, but that’s not the only notably feature of the car, in the engine bay, you’ll find a 630-horse 427ci LS Dart block built by Barowski Performance. The 427 is fueled by a Hilborn EFI-R individual runner fuel system and is backed by a TREMEC Magnum 6-speed transmission. To bring the car down from speed on the autocross, the guys fitted Alcon six piston brakes at all four corners.

Even though this Vette has the looks and the power, it’s the car’s handling characteristics that really make it stand out—which is good since its sole purpose is to take on the track. In the rear lives the Skunkworks designed and built Interceptor IRS cantilever suspension. In the front is a custom-fitted C7-R cantilever suspension with JRi shocks. Also helping to stick the Vette to the road are American Racing Wheels VF482s wrapped in Falken Azenis tires.

Inside the cabin, Hot Rod Chassis & Cycle installed a custom pedal box and Hurst shifter to help Tim have full control of his acceleration, braking, and shifting duties while on the track.