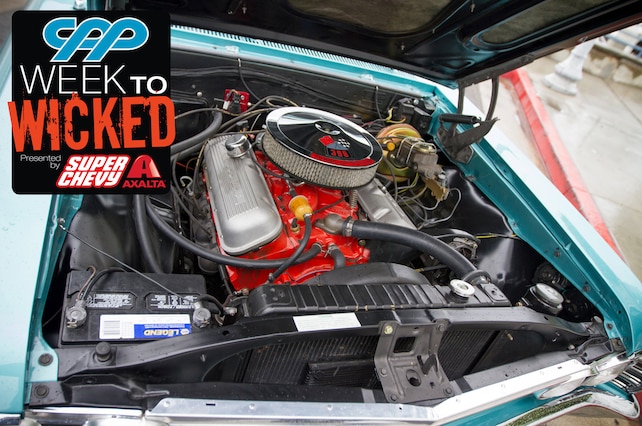 Today is like Christmas, a birthday and Columbus Day all rolled into one! Down in Super Chevy’s Tech Center, where the Week to Wicked Chevelle is awaiting its one-week Pro-Touring transformation (beginning April 18th), a crate arrived with the car’s new LS heart. That’s right, the BluePrint Engines LS427 Stroker that was just seen raging on the engine dyno is here and ready for the build! Can you top the feeling of automotive elation of breaking open the box/crate on a new performance part? We don’t think so!

Take a virtual walk around this amazing powerhouse and join us on April 18th at www.SuperChevy.com to follow the whole CPP Week to Wicked build presented by Super Chevy and Axalta!

More about the Motor

The story of this LS begins at BluePrint Engines’ Kearney Nebraska headquarters. It is there that the makings of horsepower begin. While BluePrint has roots in all manner of performance engines, this GM 427 LS series is the pinnacle of their performance lineup. The block, which is a Chevrolet LS3 casting, is treated to one of BluePrint’s stroker crankshafts, SCAT rods, and a custom piston jointly designed with Mahle. The piston was specifically engineered for this long-stroke, big-cube LS, and enables it to remain stable in the cylinder bore at high rpm. Topping the mondo shortblock is a set of BluePrint’s own LS3-style cylinder heads with big 2.165-inch valves and springs ready to accept the .624/.624-inch 239/255-degree hydraulic roller cam. The engine being supplied for the Chevelle is fully dressed and even comes with an ECU programmed with a custom calibration that was tuned in-house by BluePrint. We took a trip to BluePrint’s dyno room and watched them make a pull on this wild motor. It did not disappoint. Check out the video for an early glimpse of this LS in action, and make sure to check back during Week to Wicked

What is Week to Wicked?

It all begins the morning of April 18 when our stock 1967 Chevelle will roll into Super Chevy’s Santa Ana Tech Center for a full teardown and rebuild. We’ll be pulling the car down to its bones, replacing steering, suspension, powertrain, drivetrain, and just about everything else you can possibly imagine; all with the goal of bringing the performance of a 1967 Chevelle up to par with modern muscle cars. It’ll be a mad rush till the very last seconds of our timeline. And if that wasn’t enough, immediately following the build, we’ll be driving the car on a 1,000-plus-mile road trip to prove its road readiness. We’ll be hitting the drag strip, the engine dyno, and a few local cruise-ins (to be announced at a later date).

How can you follow along from home? The entire event will be covered on www.SuperChevy.com via daily video and story updates, as well as on all of our social media sites such as Facebook, Twitter, and Instagram. Stay tuned for what is sure to be one heckuva ride!