Hottest Corvettes and New Parts at the 2015 SEMA Show 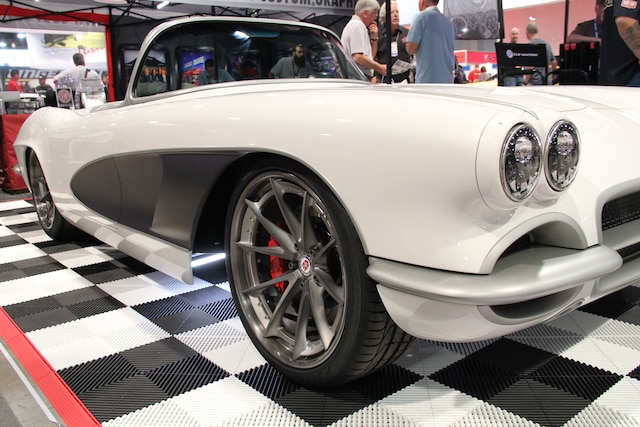 If you are a car guy, there are few spectacles quite as awe-inspiring as the SEMA show. All the big players in the aftermarket industry congregate at the Las Vegas Convention Center for what can only be described as an epic display. Good or bad (but mostly good), every trend in the automotive aftermarket starts right here. Wheel designs, color combinations, build styles – you name it – enter the magnifying glass as builders and manufacturers try to outdo each other for the coveted SEMA awards. Every appearance mod, sound system, or interior upgrade imaginable can be found on display. Suspension, tires, brakes, and anything to upgrade the handling of your Corvette is showcased with staff on hand to explain its features. Power hungry animals feast on the latest forced induction, internal engine, and bolt-on components, which are revealed by manufacturers usually for the first time at the show. You will also find anything else to support these elevated power levels, such as driveline, fuel system, and engine management upgrades.

We headed out to Vegas, November 3-6, for the customary elbow rubbing and free drinks, as well as the opportunity to keep our finger on the pulse of the hobby. Almost 1,500 vehicles were on display in the 2-million square-foot Las Vegas Convention Center. There was no shortage of Corvettes on the premises, including in our own booth, each exhibiting a unique flare to some familiar lines. In some cases, the subtly of how those lines are reworked requires a stock example for comparison. Such was the case with SCAR, Greg Thurmond’s latest creation – a ’65 Corvette with the full Pro Touring treatment – that was stunningly smooth up close. Of course, other SEMA cars were less subtle, like the widebody C7 Z06 in the Trufiber booth. The yellow paint and screw-on fender flares screamed for attention.

What really got our attention this year was the sheer outrageousness of some of the new parts. ProCharger had the Advanced Modern Performance C7 Z06 in its booth, which casually makes 1,020-rwhp on boost alone with an F-1X. Of course, for guys looking to push the limits of the Gen V even further, Holley had the answer in an aftermarket ECU and Hi-Ram LT1 intake with port injection. Holley also added a line of sheetmetal intakes for LS engines, which was only upstaged by Edelbrock’s cross-ram, dual throttle body LS3 intake that looked like it came off a Ferrari 458. Words cannot do this magnificence justice, so please feast your eyes below.

Hot Rod had the Mickey Thompson ’63 Corvette race car on display in the TEN booth with its Smokey Yunick-built “Mystery Motor” that was recently restored in a series of stories. It is the only race version known to exist. The Mark II Z33 427-cid “Mystery Motor” was a highly modified version of the W-series engine (348/409), which gave rise to the big-block.

To complement the newly released LT4 crate engine, as well as the LT1 that was released last year, Chevrolet Performance showed off an accessory drive kit for Gen V engines.

Speaking of accessory drives, March Performance has a new accessory drive setup for early Corvettes with small-blocks. Let’s face it; even the nicest engine can look terrible with a set of stock pulleys and brackets attached to it.

Speaking of looking terrible, forget about rubber hoses and crusty worm clamps for your radiator hoses. This kit from Earl’s converts LS water pumps and radiators to AN-style fittings with braided hoses. Finally!

In another moment of why-has-no-one-offered-this-before, Hooker released a new C6 exhaust system under the up-market Blackheart line with Helmholtz resonators. Genius! Say goodbye to interior drone! This same technique has been a feature of OEM intake systems for years. This 3-inch system uses 18-gauge, 304 stainless steel has dual-wall 4-inch polished quad tips with a laser-etched logo. C7 exhaust and headers were also new this year.

American Racing Headers released a new mid-length header system for the C7 that forgoes the traditional long-tubes for better emissions compliance. These 1 3/4-inch primary headers allow you to reuse the rear factory cats along with ARH’s 49-state legal Severe Duty cats ahead of them. Just like the long-tubes, these are made of TIG-welded 304 stainless steel with 3/8-inch-thick, laser-cut flanges, hand-ported inlets, scavenger spikes, and ball/socket collectors.

The Ron Fellows Performance Driving School was doing hotlaps in its C7 Z06s out on the autocross course. You could take a ride with their instructors to get a feel as to what can be accomplished with a little work. The school is located in nearby Spring Mountain Motorsports Ranch, a former venue for the OUSCI.

QA1 released shocks for C2 and C3 Corvettes, including these front coilovers. Not only will they allow you to adjust the ride height, but the optimized spring rates and valving can dramatically improve handling, ride quality, and/or weight transfer depending on your needs. Non-adjustable shocks are available for all four corners as well, which are more wallet friendly.

Chevrolet Performance had a C7 Stingray in its display that was outfitted with the new line of Z06 upgrades, including cooling, suspension, brakes, and aero (highlighted for emphasis, not actual color). These pieces will let you go lap after lap on the road course with an ear-to-ear grin.

Anderson Composites had the 1,088-rwhp Vengeance Racing C7 Z06 in its booth with a fresh set of carbon-fiber fenders. Anderson is a sister company of Seibon, and has taken over its domestic market. SEMA was its coming out party, and you can expect more high-quality carbon Corvette parts from Anderson.

Not to be outdone, the folks at Trufiber outfitted this Stingray with some one-off fender flares to complement the big, concave wheels and its catalog of carbon-fiber parts.

Edelbrock had a host of new parts, including the Pro-Flo 3 EFI system. The completeness of this port injection system makes it unique, starting with the Universal EFI Fuel Sump, which can also be purchased separately. The sump houses a high-pressure pump that easily converts your low pressure fuel system for EFI without having to drop the tank and change the pump and all your fuel lines. A dual sync distributor controls spark, which can be manipulated along with fueling through a tablet with Edelbrock’s software.

FAST is now delving into the ignition market with plug wires and the XR-1A high-output ignition coils. The individual coils are LS-style but are universal in nature, so they can work with OEM controllers as well as aftermarket ignition and EFI. At 44,000 volts and 103mJ of energy, FAST compares the output to CDI systems, making them suitable for high-powered applications with 800-1,000 horsepower or more.

The FAST E7 CD Ignition Controller is another step in its quest for world domination, also suitable for high rpm, boost, and nitrous. This race-specific digital unit has two built-in rev limiters, tach output, 20 degrees of start/retard, 160mJ of output, and a wide battery voltage range (including 16-volt systems). The E7 comes in a rugged, shock and moisture resistant casing that weighs 3.8 pounds total. Best of all, it connects with one pigtail and a wiring harness – not a mess of loose wires.

Holley was also making waves at SEMA, boasting a direct injection ECU and this LT1 Hi-Ram intake manifold with port injection bosses. This sort of supplemental fueling would certainly raise the ceiling for LT1/LT4 performance. The sky, or should we say the head gaskets, are the limit.

Ferraris, Lambos, and Vipers all have dual plenum intakes that look like this magnificent new piece from Edelbrock. Assuming clearance is sufficient, the LS3 Cross-Ram would certainly add some wow factor to any engine bay. Edelbrock says the rpm range is 1,500-7,000 and fits LS3-style heads. It uses 13-inch-long runners and dual plenums that accept two 90mm LS3 throttle bodies.

Speaking of intake manifolds, FAST released these medium and short runner kits for the LSXR LS3 and LS7 intake. Each set simply bolts in place of the stock, long runners (black) to offer different rpm benefits. FAST had talked about offering these since conception, but it has taken an awful lot of testing to have designs they were comfortable bringing to market.

Lingenfelter has several pulley kits for the new supercharged LT4 engine. Various sizes are available (from 5 to 15 percent) to overdrive the Z06’s Eaton R1740 for more boost. The drive pulley bolts onto an ATI Performance damper, spec’d by Lingenfelter.

Hellion Turbo came to SEMA with a stunningly clean single-turbo kit for the C7 Stingray. The standard kit comes with a brand-new Precision 67mm design, so new it was released the first day of the show. As the result of the new design, the prototype intake tube seen here will have to be altered slightly. However, as-is this kit is capable of 1,000 hp and a 76mm upgrade goes to 1,400+ hp. The standard kit connects to the stock airbox, uses stock exhaust manifolds and requires little to no modification of factory equipment so that the car can be returned to stock easily.

Edelbrock released its own C7 Z06 supercharger upgrade that replaces the Eaton 1.7L with a 2.3L blower. Not only does it increase the headroom, but offers better intake air temperatures with no sacrifice to hood clearance. The E-Force is a simple bolt-on replacement.

ProCharger happened to have one of the highest-powered C7 Z06s in the world in its booth. ProCharger’s new Z06 kit, with an F-1X head unit, helps the Advanced Modern Performance Z06 make 1,020-rwhp on boost alone with pump gas and methanol injection.

The Edelbrock LS3 Swirl Port Supercharged cylinder head is the aftermarket equivalent to the LS9 head. It uses the intake “wings” to create a swirl effect that helps improve flow 10 percent over the stock LSA head. Of course it also has the benefit of a raised exhaust port (0.125-inch), and 18-degree valve angle that is canted 4 degrees. This as-cast head is a great match to any E-Force, including the new, old-school style E-Force Enforcer supercharger.

The Livernois Gen V LT1 Cam Phaser is a small but important part of moving the potential of this platform forward. Last year the crew released a phaser limiter (+/- 3 degree), necessary for any aftermarket cam. However, this design completely locks the phaser for greater consistency and unlimited potential.