2015 Corvettes at Carlisle is Second Largest in History

33rd Corvettes at Carlisle: Over 5,000 Corvettes made this the second largest in the event’s history 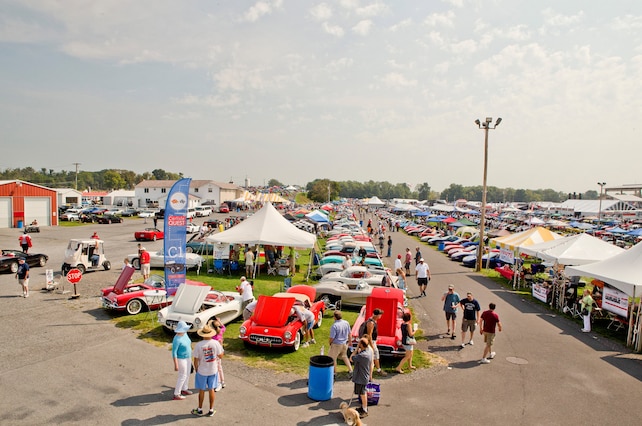 The minute I slinked out of my rental car for the 2015 Corvettes at Carlisle, I was immediately awestruck by the sheer size of this event. Having been to the Carlisle Fairgrounds before, it was simply amazing that you could pack that many cars into one facility. Other events and car groups should feel shame. This is how you do a car show. I guess it is no wonder the Corvette team actually named a color after the event (Carlisle Blue), which could be found on quite a few in the show field. Most notably, it was on a particular ZR1 that had no problem lighting up a rather pricey set of Michelin Pilot Cup tires in front of a ravenous crowd at the main stage on Friday. The same day an American flag was constructed on the hill, made up of over 200 red, white and blue Corvettes. For some shows, these 200 cars would be substantial, but the Fairgrounds packed in over 5,000 Corvettes and over 50,000 total guests from August 28 to 30th.

No matter what year, generation, color, option codes or style build you prefer, there were more than a few Corvettes you could drool over. The only negative of the show was that is was so big that it was easy to miss things. If you plan on attending next year, study the map and be strategic. Spectator parking could be found outside the event, there were many private lots that generally cost around $10 a day. Inside the event, there was Corvette-only parking if you didn’t want to enter but drove your Vette to the show. At the north end of the Fairgrounds (on the hill and back) was the NCCC Concourse and a Fun Field, usually divided into generations, styles and sometimes by car club. Another large Fun Field was located on the west side towards the middle, by the entrance and registration, which was open to any generation, year, etc. Interspersed in that general area where special sections for various car clubs, the Callaway Owners Group, a Solid Axle Display and tented areas for the ’63-’67 Stingray Registry and a 1965 Corvette display to celebrate its 50th birthday. The center of the grounds had a ZR-1 display, Team Chevrolet tent, manufacturers midway, stage and grandstand, food court, and installation alley. Below that were a few buildings with even more Corvettes (including the 1965 World’s Fair Corvette Display), an enormous swap meet taking up the entire south side, and the NCRS gallery is in the southwest corner.

Outside of the normal goings-on with the car show, swap meet and installation of exhaust systems, the Carlisle Events crew put together a long list of activities for the non-enthusiast spouse and kids as well as Corvette seminars from various sponsors on a variety of topics. Guests ranged from retired Corvette Chief Engineer Dave Mclellan and retired Corvette Plant Manager Wil Cooksey to Chip Foose (no introduction needed). Those who crave action could satisfy their needs either at the burnout contest on Friday or the autocross on Sunday. A fitting tribute was given to the late Chip Miller, co-founder of Corvettes at Carlisle, on Saturday at noon with a collective moment of revving. The lovely ladies competing for Ms. Carlisle strutted on stage on Saturday afternoon, which also revved up the crowd of enthusiasts. The day concluded with a 450+ Corvette parade and street party through downtown Carlisle until 9:30pm. The largest to date! Awards were given out Saturday as well as Sunday as the crowd wound down.

If all of this doesn’t get you excited for next year’s event, it is time to check your pulse. The 2016 Corvettes at Carlisle is scheduled for August 26-28. Start planning now!

Over 5,000 Corvettes came through these gates for the 2015 Corvettes at Carlisle. Over 450 took part in the downtown parade in Carlisle, PA on Saturday evening.

To celebrate the 50th anniversary of the 1965 Corvette, several special displays were located inside one of the buildings. This was a Development Mark IV 427 that Duntov smuggled out of Chevrolet Engineering and gave Delmo Johnson for the Sebring 12-Hour race in ’65.

Inside the NCRS Gallery, located in an old dealership building on the southwest corner of the Fairgrounds facing the road, was an impressive display of award winning restored and pristine unrestored Corvettes from 1954 to 2008.

The swap meet area was simply enormous. Here you could find some real gems like those hard to find trim pieces as well as larger items like subframes and frames.

This fuelie intake had been sitting in a barn untouched for 20 years. The tag on the top looked it.

There was also plenty of Corvette memorabilia large and small.

If you like the look of fuelie intakes and the power of an LS engine, BMFParts.com is planning to give you the best of both worlds. This prototype was on display along with retro valve covers.

All the heavy-hitters lined the manufacturers midway including Corvette Central. This repro C1 grille is one of the first parts that they ever made. Meanwhile, brand-new parts like LS conversion motor mounts were on display.

Speaking of new products, American Powertrain was also showing off a few of their own including kits to retrofit the Tremec TKO 5-speed into C1 to C4 generations.

Kooks Custom Headers was one of a few exhaust companies doing on-site sales and installation.

The Team Chevrolet tent was a popular place to cool off and meet some of the engineers and designers of the C7 as well as check out some of the new Design Packages. The new style wheels on the Z06 were pretty sharp.

In the Callaway Owners Group you could find old and new. Here you see one of Callaway’s twin-turbo C4 versus the C7 Z06 with the new 2.3L supercharger upgrade. In its most potent form the TPI made 403hp and 575 lb-ft of torque, which was impressive for its day. Is this SC757 just as impressive making 757hp and 777 lbs-ft? You be the judge.

Solid-axle Corvettes had a designated spot at the show, but could also be found throughout.

The body screams survivor on this ‘57, but the lowered stance, radials and engine tell a different tale.

This blue was a 1961-only hue, and it looks stunning with the Ermine White exterior.

The stance on this hardtop ’57 fuelie is just perfect. This is proof you can have a nicely restored classic without the ride height of a 4x4.

Ruth Exline’s custom ’54 has an LS3 crate engine, disc brakes, and all the modern amenities. As clean and well done as the exterior appears, the interior is even better. Perhaps that’s why it won a celebrity choice award.

To celebrate the 50th anniversary of the 1965 model, they were given a tent and row of their own.

With so many killer Corvettes in one place, judging was tight.

Early (metal bumper) C3s have really taken off, and as the result there were some incredibly restored examples at this year’s show.

Mike Boyles Corvette Center in Archdale, NC put this custom C3 together with gargantuan fender flares to stuff a set of deep-dish Intro wheels. Under the hood is a Chevrolet Performance 502ci big-block and the interior is upgraded to match with C4 seats and other custom touches.

Speaking of wide-bodies, check out the turbocharged powerplant on this 1981 Greenwood Daytona. The late John Greenwood signed the air cleaner of this Sunoco Blue 1 of 4. Bill and Mary Lou Valentine own serial number 2, which was built as a replica of Greenwood’s Daytona racecar.

This brilliant shade of green really grabbed our attention…

Did someone say custom paint? Yes, there were quite a few interesting murals, especially among the C4 crowd.

Among the custom crowd, this might have taken the cake. Custom wheel covers and motorcycle headlights allow this C4 to function without a hood. Perhaps even more intriguing, though, was the removed hatch. The interior of the hatch area was lined with fine wood. Mind you, all of this was executed very well and this is a pretty clean C4 (not a rat rod).

Lots of C4 ZR-1s, stock and modified like this one, were on site as part of the ZR-1 display.

There were even a few old racecars. This one was sandwiched between a 600hp naturally aspirated ZR-1, tuned by John Lingenfelter himself, and G. Gordon Liddy’s ZR-1. Not bad company to keep.

Up the hill there were some late model gems like Brandon Griggs’ 2001 with aftermarket quarter panels, Bogart wheels, and drag radials. This C5 looked like it was ready to run.

We ran into so many husband and wife teams in Carlisle. I don’t think you’ll find a more disparate his and hers Corvettes, though they both are modified.

This C6 Z06 is also track-ready. The Weld RT-S wheels with drag radials prove this bad boy isn’t playing around. The rowdy idle piping through a set of long-tube headers with modified stock exhaust really got our attention. As it turns out, this thing is packing an LME-built 430-cube LS7 with a Nitrous Outlet 200-shot.

Carlisle Blue C6s were (appropriately) in abundance in Carlisle.

Oh, and in case you thought the C7 wasn’t well represented. Most of the C7s we saw, though, were in Corvette-only parking and not part of the car show.

A full autocross course was set up in the northwest corner of the Fairgrounds, with timing equipment, cones, corner workers and even instructors on hand to help novice drivers.

This modified C4 was the quickest car on the course, which you’d expect from the sticky Hoosier slicks, running around 41-seconds.

This C6 Z06 wasn’t far behind, using that torquey LS7 on the back straight.

Behold the 2015 Ms. Carlisle, as chosen by the fans and distinguished judges. This is one of a few activities done on-stage to the benefit of the shaded grandstands.