Shoebox-Palooza: Inaugural Tri-Five Nationals Hosts Nearly 2,000 Examples of ’55, ’56 and ’57 Chevys from Across the Country 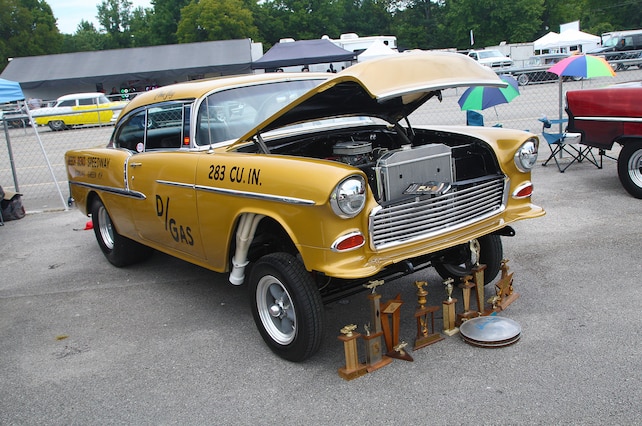 It’s been over 60 years since the first Tri-Five Chevy hit dealer showrooms. And, in that time, the model triumvirate of Chevrolets hasn’t lost any of their popularity. This was easily proven at the inaugural Danchuk Tri-Five Nationals presented Super Chevy magazine and produced by Woody’s Hot Rodz. With 1,758 1955-’57 Chevys filling up the car show space at Beech Bend Raceway in Bowling Green, Kentucky, it was easily the largest gathering of Tri-Fives in one place since they were being built and filled the lots at GM factories across the country.

The two-day event featured a massive car show, drag racing, and an autocross competition. As an added bonus, the Golden Star Auto ’55 210 sedan, built by Woody’s Hot Rodz, was given away to a lucky fan. Also announced was the formation of the new American Tri-Five Association, a club for owners and enthusiasts of Shoebox Chevys to interact with each other and enjoy similar passions for the cars that helped reinvigorate Chevrolet and put the brand at the front of the American car scene.

Back in 1955, air conditioning was a luxury item on Chevrolets, and it’s unusual to see a Tri-Five with this factory option. This Harvest Gold/India Ivory ’55 Nomad had it, along with factory power brakes, power steering, windshield washer, and a host of other options. The interior color was green and beige waffle-pattern vinyl.

If you’re a veteran Super Chevy reader, you might recognize Bill Wamboldt’s ’55 gasser from the feature we did on the car back in 2011. Since then, he’s installed a new 400-cubic-inch Dart-based small-block, swapped out the four-speed for a TH400 automatic, and added some handmade zoomie headers.

Only 11,196 150 utility sedans were built in the ’55 model year, so seeing one today is pretty unusual. Woody Carrell’s car is even more unusual because it was body number 37 to roll off the Van Nuys assembly line, and the 37th utility sedan built overall. It was originally owned by a pharmacy and used for deliveries, then bounced around for a few decades until Woody purchased it before the previous owner could scrap the car. Under the hood is a 330-horsepower, 350ci crate engine, backed by a Tremec TKO five-speed.

Another unusual ’55 model to see is the 210 hardtop. Sport coupes with 210 level trim didn’t become available until the middle of the model year, so only 11,675 were built. This Shadow Gray example belongs to North Carolina’s Lee Caplan.

Larry Burns from Greenup, Kentucky, won this totally brand new ’55 built by Woody’s Hot Rodz. The car’s giveaway was a centerpiece of the inaugural Tri-Five Nationals, and showed off how you can build a complete ’55 Chevy with few original parts.

The swap meet at the event was loaded with all sorts of cool stuff. This ’55 hardtop had a $6,250 or best offer price, and the seller claimed the original 265 under the hood was still running and viable.