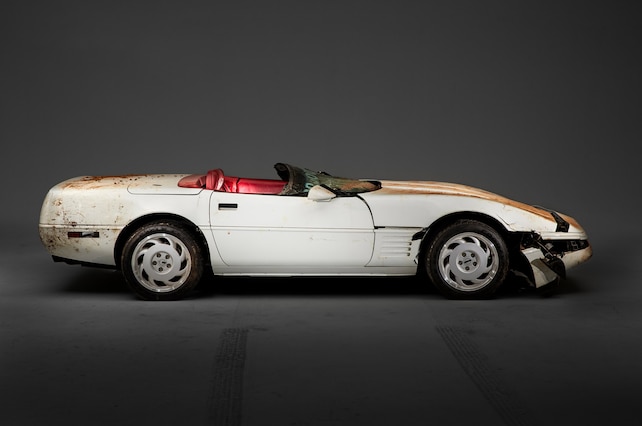 It was a scene out of a horror flick, missing only the zombies crawling up from the depths. On Wednesday, Feb. 12, 2014, at 5:44 a.m., National Corvette Museum personnel received a notification from their security company about the burglar alarm going off in the Skydome area of the museum. When everyone convened on the scene, they were shocked to discover a sinkhole had opened up beneath the Skydome and literally swallowed eight vehicles.

One of the cars to go down the hole was the 1-millionth production Corvette, a white 1992 convertible with a black top and red interior – just like the first production Corvette. It enjoyed a brief, but well-deserved moment in the spotlight after it rolled off the assembly line on July 2, 1992. A ceremony there included chief engineer Dave McLellan, who retired that year, and even Zora Arkus-Duntov himself posed for publicity photos with the milestone C4. Along with the dignitaries on hand, the workers signed the car as it moved down the assembly line.

Ironically, the car had led a pampered life in the museum for years and the natural disaster that sent it tumbling occurred barely a mile from the assembly line. Despite suffering significant damage, particularly to the windshield frame, the 1-millionth Corvette was one of three cars deemed repairable after they were extricated from the 60-foot-wide, 30-foot-deep sinkhole. The others included the 2009 ZR1 prototype known as the “Blue Devil” and a 1962 model.

The “Blue Devil” was the least-damaged of the eight and Chevrolet had it back to its pre-sinkhole form last fall. The 1962 Corvette’s restoration is ongoing and being overseen by the National Corvette Museum.

Unfortunately, the condition of the other five sinkhole cars – a 1993 ZR-1 Spyder show car, a 1984 PPG Pace Car, a 1993 40th Anniversary car, a 2001 Mallet “Hammer” Corvette and the 1.5-millionth Corvette (a 2009 model) – were damaged beyond repair. A restoration on any of them would require a foundation on which to begin, but these cars were basically shredded in the giant, natural Kentucky rock tumbler. They’ll remain part of sinkhole-themed display at the National Corvette Museum, as the Skydome section has undergone its own restoration.

As for the 1-millionth car, Chevrolet sent it to Detroit for restoration by the elite Mechanical Assembly group. Located inside the Design Center within the GM Tech Center – the Fort Knox of automotive facilities – the group has traditionally been responsible for building everything from Indy pace cars to one-off concepts. In fact, during a briefing about the restoration’s progress, Ed Welburn, GM’s global head of design, related an anecdote about Mechanical Assembly department’s historical significance.

“When I was a young designer here, under Bill Mitchell’s tutelage, there was a sign on the door that simply said, ‘Do not enter without Mr. Mitchell’s permission,’” said Welburn. “The couple of times I had that permission were special and I knew it.”

The recovered 1-millionth Corvette in the background has the equivalent of a few door dings compared to the unfortunate condition of the car in the foreground. It’s what’s left of the C4 ZR-1 Spyder – a one-off and irreplaceable concept vehicle.

Workers roll the 1-millionth Corvette into the Mechanical Assembly workshop at the GM Design Center. The group historically associated with concept and show car construction was tasked with the car’s restoration. This facility was responsible for countless special vehicles since the 1950s, especially the custom creations of design chief Bill Mitchell.

Tackling the 1-millionth Corvette, however, represents a shift in approach and tactics for the team. Rather than creating a concept car from scratch, they would be rebuilding a production model that looked like a Tyrannosaurus Rex stepped on it. And where there would normally be almost no constraints on the methods and procedures used to build a concept vehicle, Mechanical Assembly was tasked with maintaining as much of the originality as possible.

At a glance, the major damage included the windshield frame, hood and other exterior details, but some of the more vexing challenges were found inside. The dash pad and seats, for example, were scratched and scuffed, but they couldn’t exactly patch vinyl and leather like they could the cracks on the fiberglass hood. Replacement wasn’t an option, either, because the leather seats were stitched with custom “1,000,000th” embroidery on the headrests, while the underside of the dash pad – its plastic foundation – was one of the components with plant employee signatures.

“We’ll have to delicately remove and replace the top portion of the dash pad while preserving the signed part,” said David Bolognino, director of GM Design Fabrication. “It’s something that’s pretty much unprecedented, so we’re learning as we go, but fortunately this is a team with a lot of experience working with tremendous attention to detail.”

The crushed windshield frame was the most obvious damage to the car, but there was much more beneath the surface, including a number of scuffs and scratches on the soft surfaces of the interior. They would prove to be among the more challenging aspects of the restoration, as the intent was to keep the car as original as possible.

Besides the cosmetic damage to the Corvette’s exterior, the fall into the sinkhole tweaked the front subframe, which would require straightening.

The red soil that covered the car after its extrication was Mother Nature’s reminder that Corvettes weren’t necessarily her favorite cars. Either that or she simply didn’t have a Viper museum to pick on.

As for the windshield frame, the crew planned to do whatever they could to straighten the original, even if it meant hours of painstakingly alignment work. It turns out, it just needed a strong yank to get it most of the way there.

“An overhead chain in the shop was used to initially pull up the frame in order to make it easier for someone to get in the car and move it around,” said Bolognino. “Surprisingly, it pulled up very close to the original position and, comparatively speaking, it didn’t take too much to get it into the correct position. We were all amazed.”

One thing they’ll definitely have to do is repaint the car after all the bodywork is completed. The team pledges to do everything they can to mask off and preserve the signatures adorning everything from those distinctive C4 sills to the backside of the rear fascia.

We saw the car’s progress in early June and the plan is to have the car completely finished in time for the National Corvette Museum’s annual gathering ahead of Labor Day weekend. Assuming no more surprises pop up during the project, it’s a deadline the team shouldn’t have a problem meeting.

It will be the beginning of a second life for the 1-millionth Corvette – and here’s to hoping it remains on firm ground forever after.

Anyone who’s had a broken car window knows the shards appear for years after the glass is replaced. Here’s to hoping they got them all out of the 1-millionth Corvette. By the way: that’s the Pegasus concept in the background – a Bill Mitchell creation based on the Pontiac Firebird and fitted with a Ferrari V-12 engine.

One of the silver linings in the car’s disassembly was the rediscovery of the hundreds of signatures of the assembly line workers who built the historic 1-millionth Corvette. They’ll be preserved during the restoration.

The car spent a little time on a frame straightener to bring the front subframe into spec. It’s now straight as an arrow.

The wheels were damaged when the car fell into the sinkhole, but they were reconditioned and re-shod with the original Goodyear Eagle GS-C tires.

The original, one-off headrest embroidery makes the leather seat upholstery irreplaceable – but it’s also scuffed and scratched. The solution was still to be determined during our visit and our suggestion would be cleaning the leather and leaving the scuffs as a token of the car’s fate.

Plenty of bodywork lies ahead for the 1-millionth Corvette. The resto team will preserve as much of the original components as necessary, but it will get a new shot of Arctic White after all the cracks are filled.