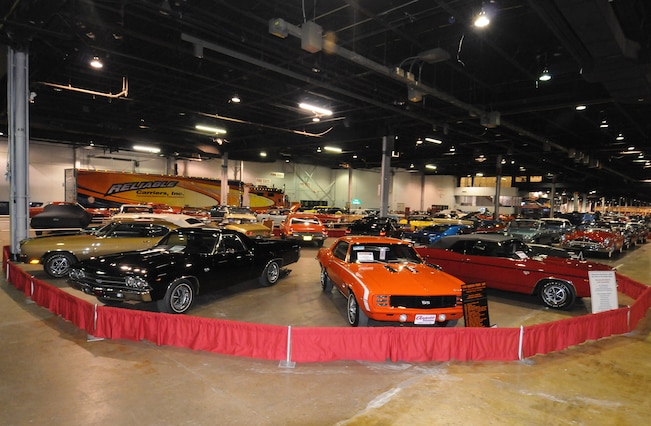 For many serious car collectors and enthusiasts, there are “don’t miss” scheduled auctions and events that happen nationwide each year, but few can provide the amazing authenticity of what shows up at the Muscle Car & Corvette Nationals (or MCACN, pronounced Ma-Cack-En). Each year, the small group of well-heeled enthusiasts who put this show on, led by show manager Bob Ashton, seemingly outdo themselves. Power explodes the weekend before Thanksgiving in the sprawling confines of the Donald E. Stephens Convention Center in Rosemont, Illinois, a stone’s throw from O’Hare Airport. But there are no stones here—it is pure unadulterated horsepower as far as the eye can see.

How do you live up to an introduction like that? How about the pilot 1967 Camaro VIN-tagged 00001? The real cars to pace the Indy 500 in 1967 and 1969? A ring of one-of-one L88 race Corvettes? Add in barn finds, miraculously unrestored muscle, street modifieds, fresh restorations, and cool odds-and-ends like Don Yenko’s personal garage refrigerator. Yes, this is MCACN.

Of course, there was even more, with parts vendors and seminars, a car corral and swap meet, and just about any Chevrolet muscle car you can think of. As a result, it would be hard to nail down one thing that was the ultimate for this year’s event, so we will let you go through the photos and decide for yourself. Next year is already being planned (November 21-22). At one time, we might have said something like, “it sure will be hard to top 2014.” With these guys, we simply wait and see how they do it…

This was actually the event’s first dual unveiling, and was significant in that these two Camaros were the pair that actually were to pace the Indy 500 in 1969. Equipped with L89 powerplants, JL8 four-wheel disc brakes, and 15-inch rims, the almost identical cars were reportedly created to appease tire rivals Firestone and Goodyear; each got shod in one company’s best street rubber. They had not been together since the day of the race in 1969; one is well known in the hobby, the other surfaced about two years ago and has just been restored. They were courtesy of Vernon Smith of Canada and Wade Ogle of California.

An overview of the event will give you an idea why it is so popular on the yearly schedule.

For those who like diamonds in the rough, the barn finds area is a top draw. We know Corvette guys are sometimes in their own world, but how about a real Modified Production ’62 with a worked Ralph Truppi/Tommy Kling small-block stuff in for good measure?

In running shape thanks to the crew at New York’s Corvette Repair resto shop, the original paint, period decals, vintage speed parts and more made this one a keeper.

Lest we get swept away in OEM greatness, the cars in the show field included some beauties; here is the 1968 Camaro resto-mod of Kevin and Wendy Pecikonis, with a late model LS-type drive line, gorgeous paint, and a show display.

One benefit of being a media weasel is showing up as the cars arrive. We will admit, this Hugger Orange RS/SS with spoked wheel covers, white walls and rubber bumper was over the top, and it was rare. It was one of two cars that Kenny Pascoe brought in for the L89 Invitational; the other was a Chevelle convertible.

So the ring of L89s featured a lot of cool stuff

Ed Cole’s personal Corvette, the only L89 El Camino ever built, some killer Camaros, but there were only five 1969 L89 Corvette converts built, and only one with sidepipes – this one, which appeared in the L89 display courtesy Tom Marcucci of Michigan.

“Wanna beer?” We could hear Don Yenko asking us as we sat down to hear about the latest trip to Detroit or Watkins Glen, had we been privileged enough to get into the shop of noted car dealer. Between it and the ’70 Deuce was a Yenko shipping crate and one of Don’s aluminum BBC blocks. All were courtesy of the Joe Salvatore collection.

They all laughed when you showed up at high school with a yellow Camaro with a “yellower” interior. Ray Wood owns this rare deluxe version of what might have been one of the most outrageous hues to color a Chevy gut ever.

Mike Slaughter just finished up this beautiful Bolero Red/white top/white interior ’67 SS/RS before the event for Keith Pass of Commerce City, Colorado. The engine is an L48 350/295hp version, but the high-option machine also received the D55 console, Z87 custom interior, U80 rear speaker, and more.

Here’s a six-cylinder that had everybody talking. After a somewhat pamper life with a dealer who was personal friends with Pete Estes and a young lady, the very first Camaro ever built, pilot 00001 ended up in the hands of an Oklahoma drag racer. He realized as he stripped it down that is was special, and had the foresight to save everything. Corey Lawson bought the car as a roller, chased its history, bought the entire parts supply of the old racer to get the parts stash, and debuted the car here; thanks to author Phil Boris, the Norwood Ambassadors, men who worked at the plant the car was constructed at, were also on hand.

Collector Clark Rand always has something cool to display, and this year included the Super Cheetah funny car, a short-wheelbase beast that he had just supervised the restoration of. During the course of that, he located a real Can Am all-aluminum Chevrolet race engine, whose injected fury can be seen poking through the hood.

In the Vintage Certified display, Jeff Helms’ pair of Chevelles were on hand. This is one of the only events for mixed make judging anywhere, with experts from various shops weighing in on the originality of parts and finish. Helms’ cars are both big-block models.

Tucked in among the 1964 invitational was this Johnny Law 409 pursuit vehicle, an Impala four-door ready to find the bad guys, catch ‘em, and with a big enough back seat at take a bunch of ‘em to the grey bar hotel at once.

OK, we are going to show yet another 1967 Camaro SS. Another L48 350/295hp model, but this one came in thanks to its original owner Roger Huntley, and features the Mod Top option that first suggested by customizer George Barris. The car was in the Color My World display sponsored by the Wellborn Musclecar Museum.

Among the barn finds this year was a real 427 powered Corvette roadster. The car, a rare combo originally painted white with a green interior built in late 1966, it was true parked-in-a-barn find that showed up on Craigslist less than one month before the show. Showing 70,000 miles, it was powered by an L36 (390hp) and Muncie four-speed.

Here was another barn find, a 1964 Chevelle funny car now owned by John Wiley of Illinois that once ran out of the southwest as a wheel-standing monster called the Tiger II. While the fiberglass was showing its wear, the car was still fairly solid, though as we noted the cockpit and rollbar, we would have to say these things were death traps driven by he-men. Scary…

And to finish off, two more rarities, the 1973 Camaro and 1974 Corvette of Dan McMichael.