Corvettes at the 2014 Chevy High Performance Nationals - Objects In Motion 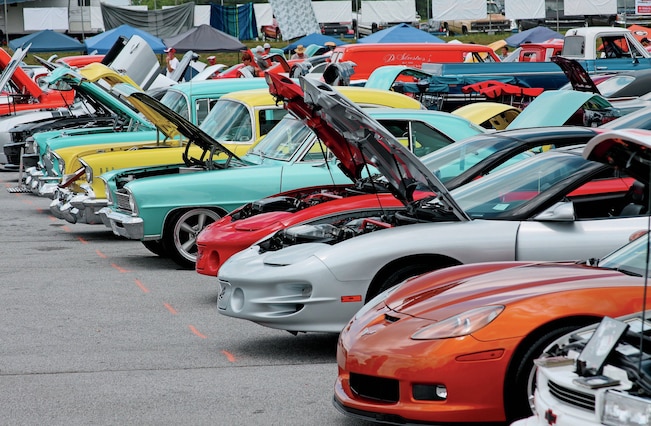 For the third year, the Chevy High Performance (CHP) Nationals presented by the NMCA came back to Atlanta Dragway in Commerce, Georgia. As always, there was a ton of drag racing action, but there was also a host of other events going on. For spectators, there was a huge midway where vendors showed off their latest and greatest go-fast gadgets and a show-and-shine full of super-clean cars. Another spectator favorite was the Jet-Hot-sponsored autocross where anyone registered for the event could take a shot at running around the cones. It’s an event that had a little somethin’ for everyone and, for the most part, the weather cooperated.

But as is the case at every NMCA-run event, the main action was on the dragstrip where hundreds of cars, and quite a few Corvettes, fought it out in various drag racing classes. All told, it was three days of all things Chevy that had enough action to keep even the most attention-deficit gearhead interested.

Terry Branton came out for the car show and then decided to slap on some blue tape and a little have fun at the autocross in his C5 Z06. We’re pretty sure he’s hooked.

Tyler Powell’s ’63 Grand Sport replica killed it on the autocross course. His times kept getting better and better throughout the day, and he ended up with one of the quickest laps of the weekend.

There were more than a few sweet Corvettes at the car show, including Gerald Copeland’s ’63. This restomod had just enough custom touches to make it stand out from the crowd.

The CHP Nationals also included a car show that had everything from restored ’50’s Corvettes to brand-new ’14 Camaros. The great weather on Saturday resulted in a large turnout.

Scoggin-Dickey was on hand with a slew of cool Chevrolet Performance crate engines on display. The newest offering was this Gen 5 LT1. It displaces 6.2 liters and features direct injection, active fuel management, and variable valve timing. Output is rated at 460 hp and 465 lb-ft of torque.

Another Vette that we would have liked to take home was Scott Dunnington’s meticulously restored ’71. The combination of a drop-top and a 454 big-block is pretty hard to beat.