The CHP Street Machine Challenge throws down hard in Atlanta 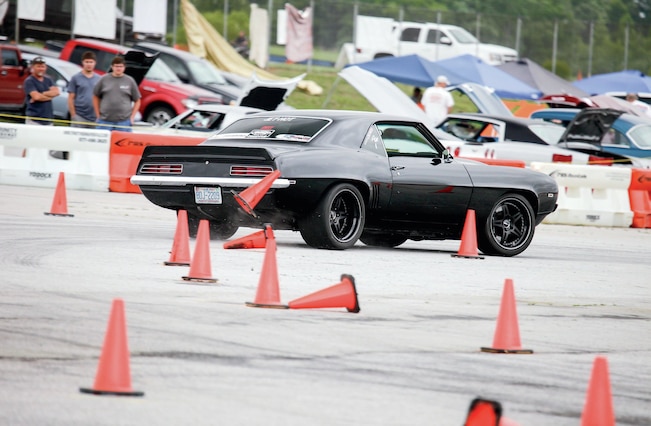 For the fourth year we’ve teamed up with ProMedia, the drag race fanatics that run the National Muscle Car Association (NMCA), to put on the Chevy High Performance Nationals at Atlanta Raceway in Commerce, Georgia. The CHP Nationals was full of heads-up action, show cars, and a host of other activities. But, it’s also where we hold our annual Street Machine Challenge (SMC). Our annual SMC event is where we invite cars from around the country and put them to the test.

This year, nine Chevys showed up to try out three very distinct events. There’s the 60-to-0 braking challenge, which was exactly what it sounds like. The real trick here is having your braking system tuned so that the fronts and rears don’t lock up. After all, flat-spotted tires are zero fun on the highway. Next up was heads-up drag racing down the quarter-mile. This is a bit more interesting since the cars have to run the same tires in each of the three events, so no drag radials. Lastly there was an autocross course to test out how each car worked in the twisties. Add the three together and it gave a good indication of how well balanced each car was.

The rules were simple. The cars had to be street legal and running tires with a minimum treadwear number of 180. There were awards for the top cars in each segment as well as one for the overall winner, which this year was Tim McGilton in his badass LS-powered ’70 Camaro.

The competition consisted of three parts: the 60-0 braking contest, the Jet-Hot High Performance Coatings’ autocross, and blasts down the quarter-mile dragstrip. First up was the speed stop where cars were brought up to 60 mph and then stopped as quickly as possible. Brian Finch managed a best distance of 127.2 feet, but he was getting a lot of brake lockup. After these runs his engine developed a strange noise, so he sat out the rest of the competition rather than risk damaging his mill further.

The fastest stopping car also had the least amount of drama. There was no going sideways, no smoke-billowing flat-spotted tires, just phenomenal braking. Debbie McGilton’s shortest stopping distance was 110.0 feet, which is downright amazing for a car without ABS.

This cool ’71 Nova was piloted by Randy Haskins. Considering his Chevy was built on a tight budget it did really well all weekend long. He also entertained the crowd by switching rear tires and drifting his Nova around the autocross course.

Another super-cool ride that wasn’t fielding a bunch of high-end parts was David Amrine’s clean ’66 Nova wagon. Yep, four doors didn’t hold David back and the fact that it was a wagon made it extra fun to watch.

Dennis Pittsenbarger kept everyone informed on the lap times, and entertained as the event’s official announcer. Recently, he started a new car-themed television show called Highway To Sell, so he might be too big-time for us to hire next year.