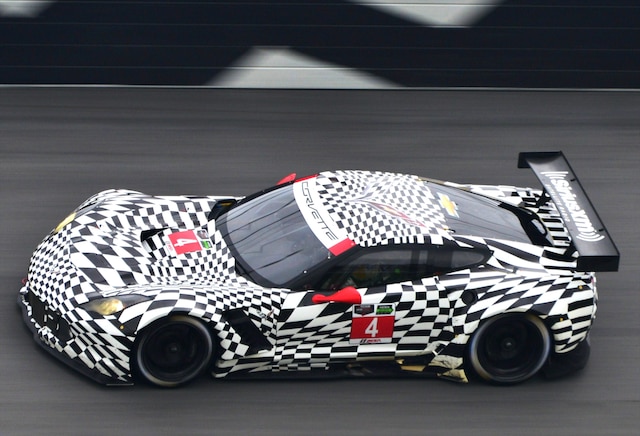 The 52nd Rolex 24 Hour Endurance race is ushering in a new era for American sports car racing. Grand Am and ALMS merged into one series in 2013 that will result in fewer races in 2014. The new Tudor United Championship (TUC) created four new racing categories, Prototype (P), Prototype Challenge (PC), Grand Touring Le Mans (GTLM) and Grand Touring Daytona (GTD). On January 3-5, the TUC held the Roar Before the 24 test weekend at Daytona International Speedway. Sixty-three entries were on hand for the test. Not surprising the prototypes were some of the fastest cars practicing during the weekend. Among the entries were six Corvette Daytona Prototypes. The #5 Action Express turned a 1:38.630 lap on Friday and that was the quickest time of the weekend. The #90 Spirit of Daytona Visit Florida.com turned a quick 1:38.898 on Friday and that time was the second fastest for the weekend. The Daytona Prototypes received new aero packages for 2014 as well as carbon brakes and an increase in horsepower from 550hp to a little over 600.

In the GTLM two brand new C7.R Pratt & Miller constructed Corvettes were at the test. Both were covered in black and white checkerboard camouflage. This camouflage was first seen at the historic races held at the Laguna Seca Race track in California last year. The covering will be removed for the unveiling of the car at the upcoming Detroit Autoshow. Underneath the camouflage is the familiar Corvette yellow paint that graced last year’s C6.R’s. The new Corvettes will face stiff competition in their GTLM class at Daytona. Ten entries representing six brands are all looking for the top podium position. This includes Corvette, Viper, Ferrari, Porsche, BMW and Aston Martin. The last time Corvette and Viper battled at Daytona was in 2000. Viper won first overall and Corvette was 30 seconds behind in 2nd position. Corvette took first place overall in 2001, but Viper had withdrawn from racing. So it should be an interesting rematch. The two Corvette C7.R’s turned the second and third quickest laps in the GTLM category. The #4 turned 1:45.743, and the #3 1:45.792. A new Porsche and Viper all ran similar times. Teams will now head back to their shops to fine tune their entries and pour over their test data to try and find more speed. Team Vette will be at Daytona to report on the final results.