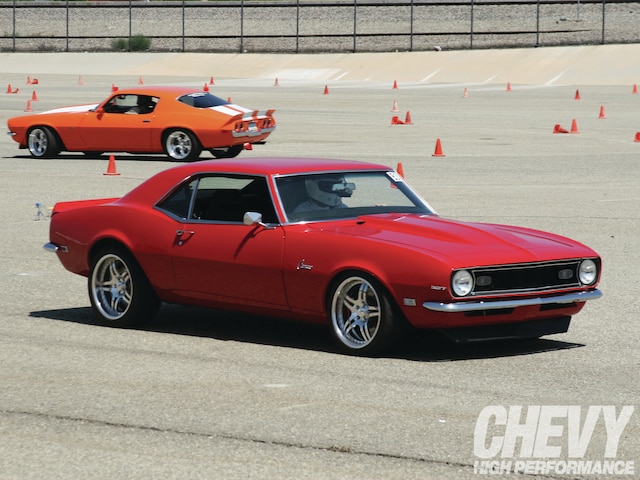 Before we begin, we want to make sure that we get the name of this event perfectly correct: the Inaugural JE Pistons NMRA/NMCA West Coast Shootout presented by Lucas Oil. Why all the worry about making a proper introduction? That’s easy—in bringing the NMRA/NMCA act to the Left Coast for the first time, the efforts of the sanctioning bodies and sponsoring companies combined to produce a great event period, no debate. It was a load of fun, an extravaganza with something for everyone—well, there were no open laps on the Auto Club Speedway oval, but short of that, there’s not much more a gearhead could have asked for.

Right off the bat, the NMRA and NMCA had almost all of their race classes running. We say almost because Pro Street and Outlaw 10.5 classes had to sit out because of ongoing noise restriction issues at Auto Club Dragway. That left, however, plenty of other ways to tip down the straight line, including the Nitto Tire West Coast Shootout, the Mickey Thompson Xtreme Drag Radial and Wild Street classes, the Centerforce Hot Street class, the Ford Racing Mustang Madness class (for those who swing that way), and three bracket classes in place. Just that added up to a full two days, but believe us, there was much more going on. (You can find race results for the NMRA/NMCA slate at www.nmradigital.com or www.nmcadigital.com).

The premier event of the weekend, held on Saturday, was the Racers Against Street Racing (RASR) True Street Challenge present by Tremec, Muscle Mustangs and Fast Fords magazine, and Nitto Tire. Tremec True Street is one of the organization’s most popular classes. Even so, it made it even bigger for this initial West Coast running by including a class for the many West Coast–based magazine staffers, and another manufacturer class, all in an effort to promote the event, as well as a cause: RASR (www.rasr.org). Take racing off the street and put it on the track (where it belongs), is their motto, and that’s what the True Street participants did.

The idea? Any street-legal cars had to complete a 15- to 20-mile cruise (we heard this one was more like 30), which in this case happened primarily on the Cal Speedway ovals … not a bad way to go. Once complete, the participants pulled directly into special staging lanes (right in front of the spectator grandstands) and had to complete three back-to-back quarter-mile passes. The fastest average time won. Several NHRA Wallys were on the line, we’ll tell you that, but multiple plaques were given out for time classes—along with lots of goodies—take it from us that the manufacturers were generous. Doesn’t sound so hard to some of you? Well, here are the facts, or at least as close as we could get to them. Forty-three cars lined up to start the event; 15 did not finish, and three more were disqualified for receiving outside assistance (once the event started, only the driver could touch the car—even a push from a friend got you booted). In short, the event was a tough challenge that lived up to its True Street name.

Even then, that’s not all that was going on. Hotchkis Sport Suspension came through in magnificent style for those who like to turn their cars a bit, sponsoring a weekend-long autocross event that did a brisk business both days of the weekend. The competition was close, we’d say even cutthroat, but the H-crew brought along plenty of extra helmets, and rides were available all weekend long. Along with that was the Baer Brakes Speed-Stop Challenge that presented quite the challenge by requiring participants to go from a dead stop to as fast as they dared before stopping 600 feet down the road within a 20x40-foot stop box—without taking out any cones, which is always easier said than done.

When you look at the West Coast Challenge as a whole, it had something for everyone; it was a very active, participant-friendly event. Sure, you could watch, but you could just as easily be having a ball doing some driving, too. CEO of NMRA and NMCA, Stephen Wolcott, probably made the most telling remark I’ve heard about this event. I asked if there would be a similar event next year. His response? “Because the people had so much fun, we’re gonna try to do a couple of events in the future.” Let’s hope it happens, because the highest compliment this writer can pay NMRA/NMCA on their initial West Coast Shootout offering is this: Next year, I want to be behind the wheel and not behind a camera lens. Yes, it was that much fun.

Although he left us some weeks ago, the presence of recently departed Baer Brakes owner Todd Garthshore still loomed large over the event, especially at the Hotchkis Autocross and Baer Brakes Speed-Stop Challenge, which were held in close proximity to each other. What can we say? Todd was an important part of the auto aftermarket industry, a friend, and all-around nice guy to many (myself included), and also responsible for making plenty of fast cars stop short. To honor Todd’s legacy, a “silent” autocross lap was held in his honor, complete with checkered flag flowing. Todd finished his race, and it was great to see him appropriately—and affectionately—honored.